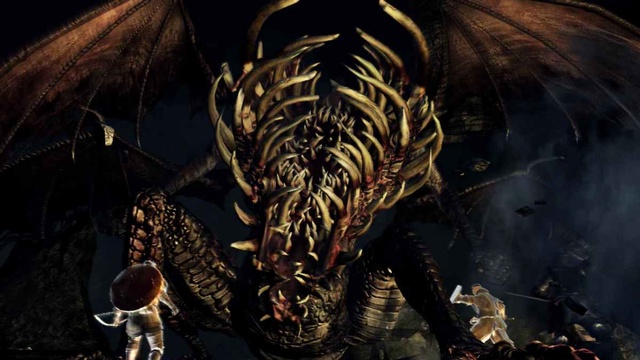 Hey- do you like to play video games to kick back and relax, forgetting your workaday woes while you push a button and make something move on your TV screen without a care in the world? If so, then you should never, ever play Dark Souls. It’s got to be the most stressful video game I’ve ever played, maybe even more so than its predecessor, the great and glorious Demon’s Souls. I’m actually finding it difficult to sit down and really dig into the game because it puts me into this particular state. Demon’s Souls did this too, but it took me something like six months to acclimatize myself to the kind of worry this game causes….

After the initial disappointment that some of the Collector’s Edition material isn’t actually in the box and you have to download it with a code, I couldn’t get the game into the 360 fast enough. I don’t remember being so excited about playing a new game in quite some time, particularly since I regard Demon’s Souls as one of the best video games I have ever played in my entire life. I wanted it to envelop me in that devastating blanket of ravishing grimness, that unremittingly gray bleakness that From Software imbued Demon’s Souls with. I could bathe in that stuff. I’m morbid like that.

And enveloped I was. Everything from the visual design to the music recaptures the dark majesty of Demon’s Souls. But immediately, I was stressed out by the game. I didn’t make it past character creation before I started fretting and sweating.

I couldn’t decide which class to play, so I wound up just going with a boring knight. Then I couldn’t decide which gift I wanted, knowing full well from past experience that just because the game tells you that something doesn’t do anything doesn’t mean that it won’t become the best item available later on. I couldn’t decide on a face, a body type, or a name. I wound up going with Ragnar since I completely blanked out on the well of Black Metal names that I typically dub my RPG characters. Damn it, I should have gone with Abbaoth. Not that it matters. Or does it? I don’t know!

Once again, From revels in its masochism in Dark Souls. And I’m not just talking about how they throw you into a fight with a giant monster within ten minutes of starting the game and before you’ve even been properly tutorialed. I’m talking about how you can’t pause, and if you push the thumbstick while in an inventory menu near a cliff, you fall and die. And oh, the cryptic dialogue, item descriptions, and overall lack of instruction. They want you to learn through pain, and that creates an amazing sense that the game is out to get you. It can wear you out if you’re not careful.

Then there’s the more open world environment. At least in Demon’s Souls, the Nexus was a safe hub area and you felt like you had some agency to stay out of really dangerous areas until you were ready. In Dark Souls, there are bonfires where you are more or less safe, but I’ve had monsters walk in and start killing me right there. Walking around and exploring the Undead Burg is so unbelieveably stressful because there is literally death at every corner. Traps, pitfalls, ambushes, a giant skeleton-thing that I ran like hell from when I saw it…the game wants you to die over and over again.

That constant cycle of dying, losing all of your souls, and trying to get back to your bloodstain to get them back is such a unique, thrilling experience in games. The stakes are extremely high, and if you’ve not learned the lessons the game is trying to teach you then you’re going to lose everything you’ve worked toward. It’s a game where a sloppy melee can result in losing an hour of grinding. Under most circumstances, that would piss me off. But with Dark Souls, it’s part of what makes the game great.

It’s rare these days for a game to be so punishing, but it also puts the player in this constant state of stress. It’s not anything like what you experience playing a ultra-hardcore platformer like Super Meat Boy or Hard Corps: Uprising. It’s a feeling that’s much closer to survival horror in a lot of ways- worrying about running out of items, worrying about surprises, worrying about the limitations of control and movement, worrying about things like weapon condition and where the next bonfire will be- if you make it past the next area.

It can make the game very tough to play, at least for me. I get so invested in it. The visceral, physical combat and atmosphere draw me in to the point where it can be rather grueling to come to terms with the inevitability of dying. But the learning process is so compelling and the rewards of surmounting the difficulty far outstrip anything measured in achievments or trophies. It’s a game that will take everything away from you, but if you play by its unique rules it will give you so much more in return. Provided that you can deal with the tension of simply walking around a corner.

I’ve only played Dark Souls for about two hours. But it feels like twenty. Some reviews have said the game isn’t “fun”, and I think that’s actually kind of right. It’s too stressful to be “fun”. But in those moments where you push just a little further or overcome a foe that had previously seemed impossible, “fun” doesn’t matter. You’ve beaten not only something the game has thrown at you, but something in yourself.

This isn’t a review of Dark Souls, I’ve barely played it. But I will say that Dark Souls is definitely an evolution of Demon’s Souls, and I’m already wondering if at the end of the next twenty (or two hundred) hours I’ll be declaring this the best game of the year, if not of this generation of games. Yes, it’s better than Demon’s Souls. If only because it’s even more stressful.

21 thoughts to “Dark Souls Stresses Me the F#$k Out”