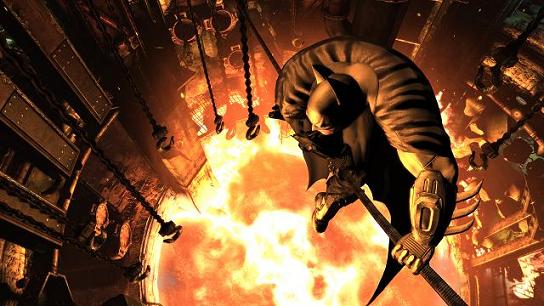 This week is an extremely exciting week as not only does Batman: Arkham City come out, but the next Professor Layton game does too and Toys R Us has its annual buy two get one free sale. Truly we live in amazing times.

In other release news, you can get your co-op on in Ratchet & Clank: All 4 One, learn to play guitar in Rocksmith, shake your digital booty in Everybody Dance or race a gaggle of souped up vehicles in Jimmie Johnson’s: Anything with an Engine. Ok, those times are starting to look less amazing.

New Releases
Batman: Arkham City is one of those games that I have not read about during the development process as I loved Arkham Asylum so much that it didn’t matter what I saw in a preview, it was a guarantee that I’d be buying Arkham City. The same could be said for Uncharted 3 although with that game I have made a concerted effort not to be spoiled. I’ll be reviewing Arkham City so hopefully I can still take the time to search through all of the nooks and crannies and still get my review done in a timely fashion. It’s hard to argue that you’re not qualified to review a Batman game when you have Batman’s symbol tattooed on your arm.

Second on my list of “This Week’s Awesome Games” is Professor Layton and the Last Specter. I love, love, love the Professor Layton games and expect that I’ll love this one too. In fact, Professor Layton is somewhat like Batman in that he’s a detective and he has a penchant for young sidekicks. In fact, I would love for someone with talent to write a Batman tale in which Alfred is given control of the Wayne fortune upon the death of Thomas and Martha due to Bruce suffering a massive psychotic break from witnessing the death of his parents. Bruce is committed and while he spends time in a mental institution, Alfred he uses the money to build a gigantic intelligence network to keep tabs on Gotham’s criminal element. When Bruce becomes old enough, Alfred arranges for his release and keeps him on a steady diet of medication so that he can control him. Alfred then sends Bruce out every night to wreak vengeance on the criminals of Gotham. Good times!

I have no idea what this Skylanders Spyro’s Adventure deal is, but it appears to be genius. It combines video games, collectible cards and action figures in a way that siphons money directly out of parents’ wallets. That tower of power doodad looks cool too.

I have played every Ratchet & Clank game except for that racing game, including the PSP games, but I’m not sure I can get behind. Ratchet and Clank: All 4 One. If the co-op isn’t necessary to enjoy the story, I’m all over it. If it is, I’ll be hard-pressed to find three other people to play it with. Plus, I’d have no way of communicating with them even if I did. Nothing says fun like mute co-op.

Rocksmith comes out this week, one last foray into the whole guitar teaching genre. At least I think it would be the last one. I guess we’ll see how well it sounds. It appears to be an actual teaching game, and not a rhythm game with a teaching element, so who knows. Maybe big sales is in its future.

PowerUP Heroes lets you use Kinect to turn your avatar into a superhero. What you do with it then is anyone’s guess.

I hope that if you neglect your pet zombie in Pet Zombies, rather than it get some sort of zombie fleas, it turns on you and devourers your brains. That ought to teach kids responsibility.

Come to think of it, I would like to see the same thing in Petz Puppyz & Kittenz.

Jimmie Johnson’s: Anything with an Engine lets you race a souped up cement mixer. You don’t see enough of that in gaming these days. Any of that, actually.

Tropico 4 already was released for the PC, but now the 360 gets its due. Too bad it doesn’t come with a collectible stogie.

I saw Ben 10: Galactic Racing at E3 and it looked like a fun kart racer. I loved when my kids used to be all into Ben 10 as I thought it was a great cartoon. Alas, they don’t care about it now and I watch enough cartoons on my own to add another one to the plate.

Jane’s Advanced Strike Fighters is an odd name as any vehicle that lets you travel over the speed of sound and rain death upon the ground is pretty damned advanced, even if the word isn’t in the title.

Deals
Toys R Us – Hooray! TRU’s buy two get one free sale is this week! Unlike Best Buy who takes the discount from the “free” game and applies it across all three games in transaction, Toys R Us charges you full price for two games and then gives you one game for nothing. This means that if there aren’t three games out right now that you want to buy you can buy two games as placeholder games, buy a third game that you want to keep and then exchange the other two when something you want comes out. In order for this to work though, the game you want to keep has to be the third game to be rung up. I’d also get gift receipts for the other two, but that’s just me. Toys R Us is also offering a $20 gift card with purchase of either a PS3 InFAMOUS 2 bundle or 360 4GB Kinect bundle and a $10 gift card with purchase of a 3DS or a Wii Mario Kart Bundle.

Steam – Steam has the S.T.A.L.K.E.R. games as well as the Supreme Commander games on sale. Visit the specials page for all of the details.

Impulse – Impulse has Deus Ex: HR and Section 8 Prejudice on sale. Visit their specials page for all of the details.