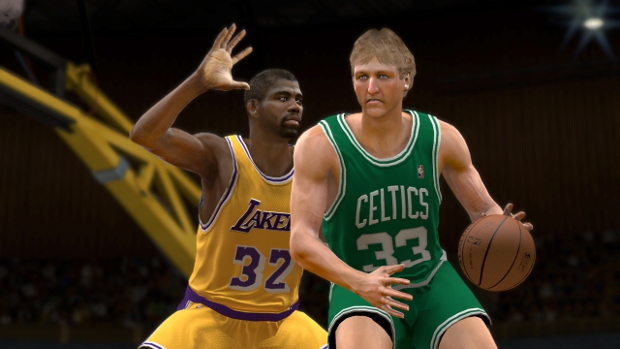 For the past few days I’ve been putting some heavy time into NBA 2k12. If you listen to the podcast you know it’s been awhile since I’ve really sunk my teeth into this series (something like 2k7 was my last entry) and a lot has changed. There are Legends teams, which I haven’t messed with. The Association seems to have improved quite a bit. And the My Player mode, in which you create a player and just play out his career, so far, has been nearly everything I’ve wanted from such a mode in other sports. I’ve got much more still to play before I pass a verdict, but here’s some preliminary notes from having played a couple of franchise games, simmed out two seasons (more to come), and having played about 15-20 My Player games (have totally lost track I’m so addicted to that)…

On the Court
NBA 2k11 is, by reputation, absolutely one of the best sports games out there when it comes to re-creating its sport and it doesn’t look to me like 2k12 will change that rep in the least. This looks and plays like an NBA game of basketball to my -admittedly not an expert- eye. Numbers in 12 minute games are in the right ballpark, although my crappy team has a devil of a time scoring.

I am having control issues because the game is very temperamental about how you move the left stick. After a generation spent playing with gamepads that didn’t have analog sticks, I’m still not over being able to just jam the stick in a direction and going there. NBA, with its momentum system, will kill you for doing that. I’m trying to adjust to little nudges and half-way moves and I am seeing more fine control, but it still feels to me like momentum is overemphasized. For example, if I’m trying to spot up for a 3 in the corner I find it unrealistically difficult to get my player into a spot between the three point line and the sideline. I routinely have a foot either out of bounds or on the line. It should not be that difficult just to get to a spot on the floor. Likewise, when defending, it’s just so easy to nudge yourself completely out of position that it gets irksome watching a guy get a virtually uncontested shot when a millisecond ago you were straight up in front of him. It’s not a deal-breaker by any stretch, but I’m amazed this doesn’t seem to bother more people. (Or maybe I’m just that bad at it?)

Presentation in the game is aces, but there are still too many times when you can’t just skip past stuff you couldn’t care less about. I have to hit the A button -no joke- like four or five times to get past the halftime show: Wait for the announcers to get a sentence out (where doing A does nothing), press once to skip the transition graphic. Wait for the first sentence or two again, then press A to skip past the half recap. Another transition graphic. Wait. Skip the recap from around the league. Another transition graphic to skip. Seriously guys, don’t you think if I’m skipping the transition graphic that I might also want to skip the stuff it’s transitioning too? It’s the same with replays (most of which you can disable, thank goodness). Skipping through rituals for timeouts and free throws can be equally painful. Guys, you really have to recognize how annoying this can get. I know you love the work you put into all this presentation stuff, but some of us just want to play basketball.

Trading
Bad news first. The Trade AI appears to be pretty whacked out. The first simmed association season produced 14 trades. I’m not sure how outside the norm that is. I found a list of trades during the ’09 season and it totalled 11, so that may not be too bad, but the content of some of those trades is cause for concern. Here is the list of trades made, in order, by the Spurs during the 2011-2012 season:

– SF Richard Jefferson (starter, 31 year old, 64 rating) + 1st round pick to Wizards for PG Mustafa Shakur (bench warmer, 27yo, 54rtg) and C Hamady N’diaye (bench warmer, 25yo, 51rtg). I do not see any NBA team trading a starter and a first rounder for a couple of bench warmers. (The game classifies those roles for the players, btw. That’s not me projecting.)

– SG Gary Neal (bench warmer, 27yo, 63rtg) and PF Antonio McDyess (bench warmer, 37yo, 53Rtg) to Pacers for SG Dahntay Jones (starter, 31yo, 51rtg). (Note that Jones probably had a higher actual rating. His profile noted a -22 next to his overall rating and a very unhappy morale. When players are upset in this game, they really sulk.)

– PG Tony Parker (Starter, 29yo, 66rtg) to Raptors for PF Ed Davis (starter, 22yo, 66rtg) and PG Jose Calderon (6th man, 30yo, 68rtg). (Note that Parker was listed as injured at season’s end and his overall rating was likely diminished by that.)

Raise your hand if you think this is a sequence of moves the perennial championship contending Spurs would make this year if there were a normal NBA season. I hear crickets.

So, yeah, that’s not so good, though there is a possible bright side here. In my season 2 sim there were only 7 trades made and they didn’t immediately look terrible to me (though I don’t know my NBA personnel very well). If the AI settles down and doesn’t make a dozen plus trades a year, that may not be too bad. Also on the plus side, I love that you can shop a player (in regular season or the draft) and immediately get offers from interested teams. There’s a lot of bad/stupid offers in there, but if you’re offering a legit NBA player there are deals you can make. (Maybe too many.)

Player Development
I have a long way to go in testing this, but it looks good right now. I’m seeing players retire in the age range between 34 and 39 and every player, including some notable names, had overall ratings between 50 and 75. There are some star players in this game rated in the 90s, but there are relatively few, so indications are you will see star players have their ratings drop off a cliff over time. I’m currently tracking the career paths of four players – Wade (30), Griffin (23), Bryant (33), and Pierce (34) – to see how their careers arc. Pierce currently looks poised for a big drop-off.

My Player Mode
Simply put, I love, love, love this mode. I know it’s not Bill’s cup of flavored coffee, but the combination of RPG elements with professional sports is high-potential good times for me. I like the idea of soaking up a loose approximation of the player experience, both in and out of play and, so far, My Player does this. It starts with a Draft play-in game that nudges your initial ratings and draft position in certain directions pending how well you play. Not all that realistic, but I’m fine with it. Then you get to interview with three teams (three questions each) and how you answer those questions also determines something about your rep. I particularly dug that the questions you’re asked by each team make sense for that team. The Suns interviewed me and talked about my PG learning from Steve Nash and having the opportunity to fill his shoes when he retires. That’s really frigg’n cool. (I created a 6′ 0″, 160 pound point guard. Hence the “Li’l Brakke” in the post title. Yes, he gets pushed around a lot.)

Once you enter the season -I was drafted 12th overall, by the 76ers (who did interview me as well)- you are told what your role is and are treated to a downtown billboard which is neat for about five seconds. (I like these nice little touches.) From there you have a bankable Drill allotment (if you sim three months you still have access to the same number of drills as if you played every game), can keep track of your player reputation (with your teammates, local fans, and league wide rep), and play in games. The game does not just throw you into the starting lineup and is very effective at letting you watch, slow sim, or quick sim to your turns on the court. I find fault with this because there’s no way to just sim, say, 4 games and then play. No, you either play the next game or the next key game and key games are generally just you playing the same two or three division rivals over and over again. There may be some player development balance reasoning behind not letting you just pick and choose the game as is your want, but it blows not having the choice.

After each game you answer a post-game press question. I think this is great, but it’s sometimes frustrating when the truncated answers end up being far, far away from what you think your little avatar is going to say. Last night I got my first start (four months into the season and after the team traded half its lineup). After the game I was asked if I expected the start or if it was a surprise (it’s cool there was a press question about that). Beats the hell out of me. I didn’t actually have a conversation with my coach after all. So I answered that, “Yeah, coach told me.” This turned into my player going on a 60 second diatribe about how I’d been bitching for the promotion for like 100 games and it was about damn time he finally recognized my obvious talent. WTF? It’s doubly annoying because the answers you give affect all three of your reputation ratings and both my team rep and local fan support dropped after that, which are the two I’m trying to cultivate. Sigh.

I haven’t gotten to contract time, but I do intend to sim out and see how that goes. Unfortunately, the trade AI that’s dicey in Association mode looks flat out broken here, if forum chatter and my own ly’n eyes are to be believed. I’ve played multiple teams with guys on the roster that didn’t start there. (I’m not even sure the Clippers would be dumb enough to take on Richard Hamilton’s contract.) My team sent half its roster away, including one of their best in their prime players in Andre Iguodala. It’s out of control, but it will hardly stop me from continuing to play this mode even after the review is done.

More to come between now and next week!