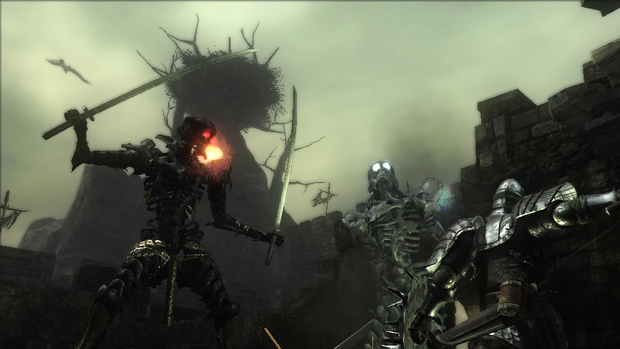 Demon’s Souls is a Game for People Who Hate Themselves

There. I said it. And it’s true. No offense if you love the game and I’m sure I’ll catch flack from Bill, but I’ve known him a long time and I promise you: Deep down in places he doesn’t like to talk about at parties, he hates himself. It’s an Ohio State thing, I think. Me? I’ve got my share of self hate too, so there’s a level to which Demon’s Souls has sunk it’s claws into my whithered heart and worked them mercilessly so as to inflict maximum pain only for me to desperately gasp, “Thank you sir! May I have another?” I’m not sure how long that will last. Not forever. There’s almost zero chance I actually finish this game. How long will I continue the masochistic torture? Ahh, but that is the question.

Buffy fans. You remember Riley Finn? You remember when Riley went all dark and hung out in some vampire nest, letting a trashy vamp suck off his wrist? Demon’s Soul fans, you are dark Riley Finn and Demon’s Souls is sucking your very life from your body and asking you to thank it for leaving you just enough to continue on as a whithered husk that makes Buffy decide she doesn’t love you anymore. This game hates you. It hates me. It hates existence. It will do terrible, terrible things to you and make you want to do terrible things to other people as retribution. When Alfred tells Bruce in The Dark Knight, “Some men just want to watch the world burn,” he’s talking about you after you finish a session with Demon’s Souls. It’s utterly by design and the game expects you to love it for its utter contempt of everything you stand for.

I absolutely refuse to give in to this. I hate you, Demon’s Souls. I HATE YOU!*

(More, complete with another great movie clip, after the break…)


Yes, in this scene I am Wes Mantooth to Demon’s Souls’ Ron Burgundy. I’m not proud of that. Later in the movie Mantooth will admit that through all that hatred there is respect. You can’t help but respect a game that is so good at being so completely without mercy. Still doesn’t mean I have to like it. And I don’t. But you know what? I didn’t like The Dark Knight either. That is an unlikable movie. Doesn’t stop it from being amazingly good and that’s really what we’re talking about with Demon’s Souls: An uncompromising vision that dares your self-loathing self to continue or be forced to admit that it’s better than you. And are you gonna let a game, a PS3 game no less, tell you it’s better than you? (It is, by the way.)

So how did I fall prey to this trap? Let me tell you.

Friday evening, bored and really not wanting to go back to Dead Island (which I’ve given a couple hours to and it just hasn’t grabbed me at all) I dug out Demon’s Souls from my stack of unplayed games and resolved to give it a real try. (Time to end The Lull.) I created a Wanderer, which is basically a dexterity-based fighter. Light armor, nimble reflexes, fast attacks. I made it what I’d guess is a fair distance before being felled the first time. I then spent the next hour repeatedly dying before getting back to that same point, losing souls in the process, not that the game was interested in letting me know just what these souls are for beyond buying and repairing stuff. I had accomplished absolutely nothing and I quit in disgust.

As I finished my dinner, though, there was this voice in my head saying, “Maybe try it with a different character?” I know that voice. It’s the voice of a bumbling imbecile who wishes me a lifetime of torment. And yet I listen. Starting up a straight-up fighter, this time I managed to adventure much further. I even manage to trade in some collected souls on repairing some equipment because -I don’t know- it’s better than losing the souls… I guess. I keep looking around the home base area, called the Nexus, for a place to store the 1,500 or so souls I’ve managed to accumulate. Surely if the game features a mechanic by which you lose collected souls and isn’t going to throw in any kind of waypoints that let you go back mid-level to do some soul trading surely, surely, SURELY, there must be a way to bank these things if you do spend 10 minutes just hauling your ass back to the Nexus. Yeah, not so much. So I go back into the world and die. Then I die again before getting my body and souls back, and they’re lost. Another two hours spent accomplishing exactly nothing.

I go to bed swearing on all things decent and warm and fuzzy -kittens, basically- that I will never touch this game again.

Saturday morning I awoke. Deep sleep has a habit of tricking the brain into believing it’s learned something. I know this because some scientist guys at some point in my life got their work published somewhere where I in turn absorbed the McNuggets of their ideas before moving on and forgetting most of what I’d read. So as I stood in my kitchen trying to think of something breakfasty to give my body that didn’t make me want to vomit at the thought of it** I had two thoughts:

1) I really should work on the podcast.
2) You know, I feel like I learned some stuff about Demon’s Souls last night. I’ll bet if I went back I can do better.

I didn’t touch the podcast until Sunday. Instead I went back to my Wanderer, because it turns out he really is more dexterous than generic fighter guy, and after Witcher 2 I can hardly get enough somersaulting underneath the sword swings and bites of creatures trying to end me. Plus, I’ve learned so much…

If Yoda were actually there in that moment he’d slap me across the face and call me a stupid git who knows absolutely nothing about anything; as Yoda was prone to doing. As it turned out, though, I had learned something*** and I managed to actually see a big chunk of the opening level – like a dragon I will never ever go fight. Finally -FINALLY- I was getting somewhere! I had collected thousands of souls that I really didn’t quite know what to do with and I had managed to open a gate to the first boss, The Phalanx. Of course that gate was back at the beginning of the level and, of course, in my search for a shortcut back there I got killed. Then I got killed again trying to get back to my precious soul collection.

I will never play this game again. Except we all know that’s not true. Why? Because deep down in places I don’t like to talk about at parties (this sounds strangely familiar), I know that I hate myself and that I deserve to be punished. The game is like a bug in your brain, maybe the sluggy thing from Wrath of Kahn, only with its own voice. And it’s whispering to you, ever whispering, that this time -THIS TIME- if you go back it will be different. I mean I’ve learned so much, right?

Where the f*** is Yoda to slap you across the face when you need him?

But then, this time it really was different. Screw the lost souls, let’s just go see this boss thing and see what that’s like. And you know what happened? I whipped that Phalanx’s sorry ass on the first try. I’ll grant you as Demon’s Souls bosses go, I don’t need to see the others to know this thing’s a giant bog of gooifed wussy, but I won and I didn’t die and that makes me special (in my own mind). Not only have I won a big encounter, I have my in-game humanity restored, which means a doubling of my vitality. I can trade in souls for character building stat boosts instead of just equipment repair or limited gear that I don’t need. I love this game. Love. It.

With renewed confidence I go back out into the first area, always conveniently restocked with beasties, and I hack and slash my way, corridor over corridor, to some spear-wielding black knight guy who waxed me on my first attempt. Surely, experience and massive health boost in my corner, he will be no trouble. I die. Another 2,000 or so souls left on the stony floor. Okay, there’s no need to panic here. I’m back in spirit form (half health, better damage), but I can go back there and get my souls back, right? Yeah, you know this drill. I never got close to my body. About two minutes into what is about a ten minute trek, still in what qualifies as an “easy” portion of the level, I got caught swinging madly at two monsters only to see my hero hitting the wall next to them over and over again. (Safety tip: Learn to use target lock.) They stun and hack and before I can breath a disbelieving expletive I am dead. Souls gone. Humanity gone. Again. (The only way to get your humanity back at this point is through use of rare items or beating another boss.)

I haven’t touched the game since, but I know that I will. I will go home tonight and I’ll load it up and I’ll have some kind of success and I’ll feel good, like I’m finally getting it, and then I’ll lose it all and I will hate the game and myself and all of you (just because) and the cycle will repeat for at least the next five days until I’m forced to quit playing because Skyrim has released.

Demon’s Souls. Only Wes Mantooth can say it properly:

Deep down in my stomach, with every inch of me, I pure, straight hate you. But god damnit do I respect you.

*I think I’m setting a No High Scores record for analogous pop-culture tie-ins in a single post. It’s good to aim high.
**I don’t like to eat breakfast, even when I’m not feeling self-loathing about Demon’s Souls. Nothing ever sounds good to me in the morning, yet I feel obligated to ingest something because people in white coats and who know how to properly use a stethoscope tell me it’s the, “most important meal of the day.”
***Like turning the Game Mode of my TV on so that I’m not a millisecond behind the action all the time. Seriously folks, if you have an LCD TV, game mode can be hugely important in precision games. Pinball FX has been the big one so far, but I’ve noticed monumental swings in my ability to survive in Demon’s Souls based on whether or not I remember to turn Game Mode on.
****Yay footnotes!

27 thoughts to “Demon’s Souls: The Hate is Strong With This One”