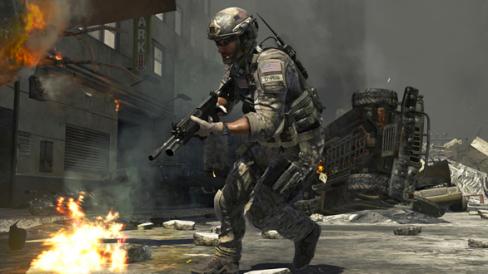 The Modern Warfare 3 credits are rolling as I type this. I got pretty much everything I expected out of the 8-9 hour single player campaign- almost non-stop pitched intensity with the action careening from massive set piece to massive set piece all over the globe with ultra-high production values and a paramilitary vibe just north of G.I. Joe levels of gung-ho camp. What I did not, however, expect was that the whole thing would end in a scene that had to have been inspired by something in the classic Dario Argento film Suspiria. If you’ve seen that picture and you play through MW3, you’ll know exactly what I mean. Totally unexpected, and really it was the only time I was surprised by the game.

Which isn’t to say it was bad. Not at all- it was a blast, just like the past Modern Warfare campaigns. There are the surprising shootings, the disembodied voices narrating events over high tech computer graphics, AC130 sequences, millions of bad guys, and major landmarks getting laid to waste. Make no mistake, if you’re in a Modern Warfare game and you’re taking a jeep ride- you better bring a parachute.

The campaigns in these games take a lot of flak for their scripting and hallway-like linearity, as well as their sometimes incomprehensible writing. I don’t disagree with some of the complaints, but the design goal in them is pretty much the same as a theme park ride. And really, for this kind of frankly shallow shooter, I don’t mind that at all. I want to be dazzled and thrilled. But yet, there is a note of subversion in them that I think is really quite clever beneath the spectacle. In the second game, there’s a sequence where the bad guys are in the White House. In this one, they’re in the New York Stock Exchange. Occupy Wall Street, indeed.

The set pieces were just as ridiculous and over the top as usual- one NoHS poster over in the Battlefield 3 discussion said that these games are “shit going bananas constantly” and that’s really the best way to put it. But here in round 3 after the surprise nuke, “No Russian” (which is referenced specifically in the game as part of the narrative), and all of that great stuff in the second game where Infinity Ward put the devastation of war right in the heart of an American suburb, this time out the game just can’t manage to shock and awe despite some really good attempts.

But that doesn’t mean there aren’t some fantastic, powerful scenes. A running battle through the streets of Prague, fighting the Russians alongside the Czech resistance is definitely a high point, as is that great submarine takedown shown at E3. Yes, very scripted, but you can’t argue that it’s not fun to play through it. Battles in Paris, London, Sierra Leone, and Somalia leave me wondering what Soap and Price are going to do with all of their frequent flyer miles. Or how they manage to get all of their guns past security.

There is a female in the game, which is something of a surprise. Of course she’s in distress and must be rescued in a rather silly plot contrivance, But the stakes are high, seeing as she’s the only woman in the Modern Warfare universe. Codename: Smurfette.

And now, there’s more solo play awaiting in the SpecOps missions, which you can also play co-op. These were a high point of MW2 and I’m glad to see them return. They seem to be more story-driven this time out. One of the first unlocked ones lets you play the other side of one of the campaign’s missions. Great idea.

So MW3 pretty much puts Battlefield 3 down for the ten count in terms of single player content. DICE simply didn’t have a dog in the show as far as I’m concerned. Multiplayer may turn out to be a different story because the two games on that level are really far more different than EA’s marketing would have us believe. I’m just really glad that there’s a deathstreak handicap now for crap players like me. Watch out xXxJuggaloPimp420xXx and J3WKILL3R666, I’m coming for YOU.