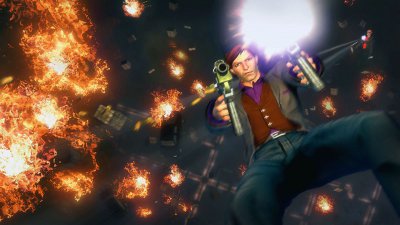 Now that the embargo has lifted, you can read all about my copious love for Saints Row: The Third. The game has been getting mixed, albeit mostly positive reviews. Some of the negative-ish reviews I’ve read seem to think that the game’s paucity of missions when compared to SR2 is because they’re holding back stuff for DLC. Personally I think that’s inserting a bit too much presupposition into the review process, but that’s just me. Personally, I don’t feel like anything has been held back. I was totally satisfied with the length of the campaign and the mission structure and I still have a ton of stuff to do.

To put things in perspective, I have played the games for a hair over 13 hours. In that time I completed the campaign on casual, did one instance of all but one activity, Tank Mayhem, which I’ve done two instances of. I have completed one assassination target and picked up two vehicles for delivery to the chop-shop. I have completed maybe 7 of the 41 challenges. One district is at something like 49% taken over, one is in the low thirties and the other two are each around 21%. There are plenty of abilities and bonuses I still can’t afford, either because I don’t have enough money, or I haven’t leveled up enough to unlock them. I have found barely any collectibles. I have barely upgraded my weapons and still haven’t purchased all of them. There is still plenty of game here for me to experience and that’s not counting the fact that I’m going to play the campaign over entirely from scratch in co-op. If content was held back specifically to have post-release DLC, I don’t feel like the rest of the game has suffered for it. That’s just me though and I can certainly understand the opinion that all content made for the game should be provided when the game launches with new material created post-launch.

Now that we’ve gotten that out of the way, here are some strategies for ensuring your time in Steelport is as fun and productive as possible…

Spend Money to Make Money
Saints Row 3 did away with giving out things like unlimited sprint for completing the final tier of an activity. Instead you have to level up enough to unlock it and then buy it with cold, hard cash. There are a lot of things to buy in this game including property, shops, weapons, weapon upgrades, vehicle customization, abilities for you and your gang and upgrades to your strongholds. You can certainly make money while doing missions however the best way to make money is to invest money in property and hourly income bonuses. In other words, spend money to make money. Buy the respect and income bonuses as soon as you can as they will help you level up faster and have more money to play with. Buy property whenever you can afford it, even if it’s just a 1000 dollar crack house. Similarly, buying stores offers four benefits: a higher percentage of district control, more hourly income, a discount on items and, most importantly, a place to hide. The Forgive and Forget is gone but instead you can go into any crib or store you own and instantly lose your notoriety. Having a strategic selection of stores can make your travels in Steelport that much easier.

Push Your Buttons
The following buttons are very, very important in Saints Row 3: Left bumper, Y and A. Left bumper allows you to sprint, but it also allows you to pull of awesome moves. Sprint towards an enemy and attack them as soon as you get to them and you’ll do a wrestling move take-down thingy that temporarily incapacitates them. Sprint towards a car and press Y and you’ll bust through the window Dukes of Hazzard style and hijack the car. The Y button is a catch-all button, which can be annoying at times, especially if you’re trying to revive a downed homie right next to a car but it is what it is. Y is used to open doors, get in cars, revive homies, take human shields, access your crib, access stores and probably other things that I can’t remember. Learn to love the Y button. The A button allows you to drift while driving. When I started playing the game, I kept hitting B for the emergency brake, held over from Driver, no doubt. B brings up your radial weapon menu, not drift, so I crashed into a ton of stuff while trying to powerslide with the weapon menu bearing witness to my ineptitude. Drifiting can be turned off and on with the press of a button, so to speak, so it is incredible easy to powerslide into a turn and let off of it once your car is facing the right direction. I typically can’t drive for shit in sandbox games and I can drive like a champ in this one.

You Have a GPS, Use It
My mother-in-law has a GPS and never uses it. It is incredibly annoying. You have a GPS in SR3 and using it is the easiest way to get around Steelport. Not only does the path appear on your mini-map, but giant, green arrows appear in the game world proper, making it easy to get to exactly where you’re going. As you go off of the beaten path and drive around you’ll find GPS shortcuts that will make your handy navigational computer even more efficient. Also, if you have multiple missions to do, you pick one and find that it’s farther away than you want to travel right now, you can go into the main menu and choose to quit the mission with no penalty.

READ ALSO:  Links from the Mothership

Clothes Make the Man / Woman
As you progress through the game, more and more outfits will be given to you and become available in stores. Changing your outfits not only keeps things fun and exciting but can also raise the amount of respect you have. Ditto for car customization, although making a better ride has more tangible benefits in terms of offense and defense. The more outrageous the outfit, the more respect you get, however you can get plenty of respect for simply dressing up if a cocktail dress and hair curlers won’t look good on your 350 lb Asian dude.

Play With A Friend
The drop-in, drop-out co-op from SR2 has been replaced with a system in which you have to load up your campaign in co-op and then have someone join. It’s not that big of a deal as the saves are shared between single player and co-op so it’s not like you’re going to lose progress for choosing one over the other. IF yo’re that worried about people not being able to just drop in, you can always load up your game as a co-op game even when you don’t have a partner and do your thing in the desperate hope that someone will join you. One thing that hasn’t changed since SR2 is how much fun co-op is. The mayhem and absurdity is made better with another person and some things are made easier when you have another person that can provide air support or throw farts in a jar.

Do Whatever You Want
Seriously, the best way to experience this game is just to do whatever the hell you want. If you see a plane and wonder, “Hey, I’d like to fly that” then walk up it, hit Y and climb on in. Drive wherever you want, piss off whoever you want, jump of off whatever you want. You’ll get respect for it, and possibly some cash, but most of all you’ll have a lot of fun. After all, that is what we’re here for.