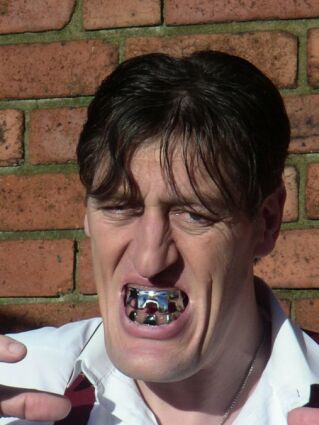 If it weren’t for the fact that I’m a consummate professional, I’d give this column a rest from now until the end of the year. All of the big releases are behind us, aside from a game here and there. I mean, nothing against Jaws: Ultimate Predator, but honestly, who releases a Jaws game in the winter? No one swims in winter!

Any way, enough wasting time. On to the (meager) games!

When my wife was a child, she saw Jaws and then was afraid to shower for months as she thought Jaws would come up out of the shower drain. Thankfully, common sense and notions of hygiene prevailed. In Jaws: Ultimate Predator you play as Jaws and you eat armed swimmers and sea creatures, dispatching them with your deadly combos. Yes, that’s right, combos.

Nano Assault lets you fly around in your Nanite vessel and destroy bad DNA. I’m sure there’s a virus or something and you’re just not flying around obliterating random gene sequences.

Assassin’s Creed Revelations comes out this week for the PC, allowing PC owners to get in on all of the throat stabbing hilarity. I picked up a copy of the 360 version on Black Friday as a Christmas gift to me from my wife. Unfortunately that means I have to wait until Christmas to play it but it was either that or hope Santa brought it and I’m not sure I’ve been good enough for that.

Deals
Toys R Us – Buy a Skylanders Starter Pack (Wii) or Mario and Sonic at the London Olympic Games and get any Wii game at 50% off. Buy Need For Speed: The Run, Modern Warfare 3 or Battlefield 3 and get any PS3 or 360 game at 50% off. Buy a Skylanders Starter Kit (3DS) or Super Mario 3D Land and get any 3DS game for 50% off. Get a free Skylanders Adventure pack with the purchase of any Skylanders Starter pack. Get a free $20 gift card with purchase of a $299 360 Kinect bundle. Get the following DS games at two for $40: Power Rangers Samurai, Beyblade: Metal Fusion, Harry Potter and the Deathly Hallows Part 2, The Smurfs, Nicktoons MLB, Generator Rex, Phineas and Ferb, Aliens: Infestation, Petz Nersery 2, Pet Shelter, Wipeout, Petz Puppy Shelter, Moshi Monsters Zoo, Zoobles, Lalaloopzy, Kartz, Spongebob Surfing, Victorious, Cars 2, Alvin and the Chipmunks, Happy Feet 2, Camping Mama, Call of Duty MW3, Lego Ninjago, Super Scribblenauts, Gremlins Gizmo.

Best Buy – Buy the PS3 3D display for $499, get a PS3 for $100. Buy Modern Warfare 3, Battlefield 3 or Halo Anniversary for the 360 and get a Live 12 month Gold card for $39.99. Buy any two of the following Kinect games and get a free $25 gift card: Cabela’s Adventure Camp, Winter Stars, Jillian Michael’s Fitness Adventure, The Black Eyed Peas Experience, Your Shape: Fitness Evolved 2012 $49.99, Glee Karaoke Revolution Volume 3.

Kmart – Get a free copy of Dance Central 2 with purchase of Xbox 360 4GB Kinect bundle.