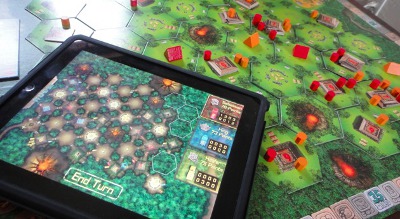 Wow. My first post on NHS. I feel a strange sense of anticipation, mixed with helplessness, mixed with awe: here before me is an potentially endless book of blank pages, each creamy white and pregnant with possibility, waiting for someone to fill them with something worthwhile. It almost seems a shame to sully them but that’s what were all here for, so better get on with it. But where to start? What to write? Well, I was bought on board promising content about board games about iOS, so what better place to begin than by examining the strange relationship between the two?

For much of my adult life, I’ve been a dedicated Apple (not the fruit, obviously) hater. It started in a job where I was forced to use when, just when the companies vision and product were at their lowest ebb, a user experience so dreadful that I found it hard to put behind me. Trying to get work done with only one mouse button when you’re used to two and a scroll wheel was a bit like trying to saw down a tree with one hand tied behind your back – possible, but inherently disabling. And, oh, the lack of useful freeware! And the closed shell, uncustomisable nature of the operating system, tied strongly into the hardware! Dreadful. All fixed now, of course, but when the company reinvented itself as a style icon, I refused to buy in because, well, because it was a style icon. And I’m not, so I dislike paying a premium for it.

What pushed me off the fence and into the Apple store to order myself a refurbished iPad was the burgeoning sense that as a board gamer, I could simply no longer ignore the swell of quality iOS implementations of important board games. And whilst it left a sizable dent in my wallet and hasn’t made me any more of a hipster, I haven’t regretted that for a moment. Not only were the games I picked up for it on the whole very good, faithful re-creations of the originals, but as time has passed more and more exciting titles have made the transition.

But why? It’s a marriage made in heaven for me, but how come it’s taken a whole new platform to re-invent the digitisation of cool board games?

Well at the risk of stating the obvious one reason is undoubtedly the fact that the App Store generally managed to disprove the concept that people were only willing to pay big money for big production when it came to video games. Before this, the only board game implementations were either freeware efforts, dependent on the love and enthusiasm of their developers to push through into the light of day, or re-creations of well known licenses which could be sure of a market but which generally relied on rubbish source material and so were of little interest to hobbyists. And the end results were clearly not as complex to produce as a shooter or a platform game so punters were only interested in paying discount prices. So there were not enough people willing to pay for the product in order to bring a hobby game into the video game market and turn a profit on the production costs. But the App Store changed all that. Part of this is clearly the distribution model: with no physical product publishers could pare their margins back to a bare minimum resulting in bargain prices. And part of it is critical mass which, currently, only Apple really has.

The other element is, of course, the interface. It’s staggering when you think about it that touch screen technology has been available and affordable for so long and yet it’s only recently that developers have really got a handle on what it’s good for. Indeed it’s also pretty staggering the number of iOS games one can get buy that still screw this up and spoil the play experience, especially in live action games. But I digress. You can play board game implementations on consoles but a joypad is a horrible way to interact with the software. A mouse and a keyboard is obviously better, but it can’t hold a candle to the intimacy and responsiveness of a touch screen. It’s only one short leap away from handling the pieces of a physical game.

And yet while it’s a short leap, it’s an important one. One curiosity of board games on iOS is the number that don’t provide some sort of facility for playing with other people. At first I was content to put this down to some sort of technical issue, but after seeing the seamless manner in which certain apps such as those for Carcassonne  and Ascension manage it, I wasn’t so sure. The clincher was attempting to play the co-operative game Ghost Stories on my iPad with a friend. That highlighted two things: firstly that a co-operative game requires way too much communication between players to work properly without face-to-face play, and the same will of course be true of any competitive game that benefits from negotiation. The second was that passing an iPad around so each player could take a look at the game state when required is far more fiddly and annoying than sitting over a board together where everyone can see everything they need to all the same time. So it’s clear that only certain games are suitable for an iOS conversion depending on aspects such as player communication, turn length and more esoteric factors like how cleverly a programmer can fit all the required information into the space of a tablet screen. It’s a shame this limitation on multi-player exists – ultimately I play board games more because I enjoy playing against other, real people than because I like working through strategies and mechanics. But unfortunately we’re reliant on the imaginations and skills of product designers to solve this one – for the
time being we’re still constrained by the technology to games that can fit themselves into this niche.

The number of suitable titles is further constrained by the observation that, however cleverly the designer ports them, some game styles just don’t translate well to AI or impersonal play. Some of my first board and card game purchases after getting my iPad were for well known bidding and trading games such as Ra, Medici and Bohnanaza but I deleted all three of those after a couple of plays each. They worked well enough technically, and the AI was challenging, but sitting bent over a tablet was no substitute for the crazy thrill of participating in a live auction where people shout, whistle, such their teeth, slam down wooden pieces on the table and in which you can often cut the tension with a knife. Again it’s shame that the range is whittled down further, but in a way it’s comforting to know there are some aspects of game playing that will never, ever, be replicated in silicon.

Fortunately, in spite of these constraints, there are a very large number of boardgames that remain, and that number is only growing. Over the coming weeks and months I hope to have the opportunity to introduce you to some of my favourites as well as black-marking a few I’ve found to be unsatisfactory in addition to talking about the board games that spawned them. But that’s for the blank pages that lie ahead: for now, I’d like to know about your theories for the connection between iOS and board games, what titles you want to see converted, and the barriers that lie across a successful translation from cardboard to digital.

11 thoughts to “Tablets on Board”