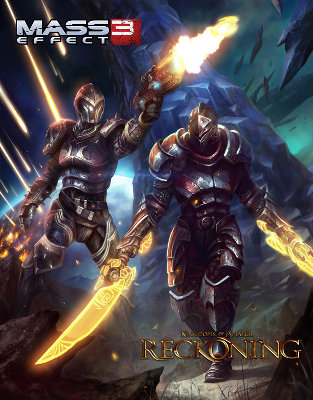 Hey, do you like demos? Do you like RPG's? Do you like free stuff? If you answered "yes" to any of these questions, boy howdy, do I have a deal for you.

If you download and play the upcoming Kingdoms of Amalur: Reckoning demo when it drops on January 17th you'll get some free Mass Effect 3 stuff when the game drops in March. Similarly, if you play the Mass Effect 3 demo when it drops later this month you'll get some free Kingdoms of Amalur: Reckoning stuff when that game drops in February. That's a lot of free stuff just for playing demos of games you were probably going to play any way.

The Kingdoms demo consists of player creation and 45 minutes of tooling around Curt Schilling's open world paradise before ending with a trailer. Jumping through these feudal hoops will net you the Reckoner Knight Armor and the Chakram Launcher in Mass Effect 3. The armor makes close quarters combat more effective and increases projectile velocity, two effects that appear to be at odds with one another while the launcher shoots explosive discs, similar to the eastern Indian weapon it's named for, you know, minus the space age explosive parts.

There's no word on what will be in the Mass Effect 3 demo, but it's probably something super exciting like Space Knitting or Black Hole Spelunking  Space Cave Diving. Whatever it has in it, playing the demo will get you the N7 Armor and Omni-blade Daggers in Kingdoms. The armor is inspired by Commander Shepard and the daggers are, um, daggers. Not sure what else they do other than let you stab people, but seeing how that's the express purpose of a dagger, I hope these fance daggers have more to them than the function they're specifically designed for.

READ ALSO:  PSN Down Today. But All is Well!

Like any free items, I'm sure these items will be rendered obsolete upon reaching the first merchant in the game, but hey, free stuff!