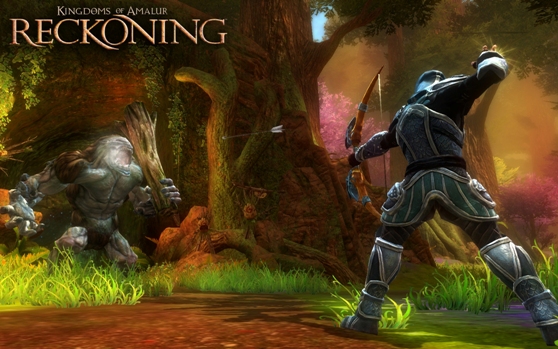 I rarely (and I mean rarely) play demos. This damn game, I don’t know what it is, but I have been terribly curious to see how it turns out since I first saw it at E3. When I left the screening room I thought it could be a revolutionary step in action-rpgs…or a huge flop. Still intrigued, I snagged the 360 demo yesterday.

Amalur is trying to be a lot of things, which has a tendency to backfire on developers.

It’s trying to be an epic open world rpg like Skyrim, Oblivion, etc.

It’s trying to be a deep, story driven rpg like a Dragon Age or even Mass Effect.

It’s trying to be an action rpg like Darksiders.

It’s trying to look (graphically and in art direction) like World of WarCraft. (I was shocked at how WarCrafty it looked. These developers love them some bloom effect.)

Throw it in the blender and you get Amalur. The demo isn’t terribly long but it gives you a really good idea of what’s in store if you drop your cash on it…

The combat is pure action rpg – press A to get all stabby, press RT to bring up a quick spell/special ability menu, press a button I can’t remember to shoot a bow, B to quick dodge, and LT to bring up a shield to block in real time.

The blocking mechanic is the only thing that reminds me of Dark Souls. You have to time your blocks which makes combat at least a little bit tactical. It looks incredibly weird though because you don’t SEE the shield until you use it to block.  It vanishes when you aren’t using it. My avatar has a bow on his back, two daggers in hand and yet can magically produce a kite shield from apparently under his vest.

I did a Dark Souls test and nope…you can’t walk off a cliff. Ah well.

The combat reminds of me Darksiders. It’s fast, has some nice animations, but at least in the demo isn’t terribly difficult. The boss you fight is a cakewalk. You can string together attacks, do some wicked finishing moves and generally leap around like a jumping bean. This isn’t Skyrim combat—it’s pure action with a lot of stat crunching numbers under the hood.

That’s the odd blend here as Amalur is full of traditional rpg trappings: stats, skills, dialogue out the wazoo (there’s a lot of speech in the demo and you play the strong, silent type. You have no voice which is all too common in this genre), various skill trees for melee, stealth and magic and the obvious crate smashing to find gold pieces. Hey at least the giant rats weren’t carrying money on them….(cough Skyrim).

The demo throws a lot of weapons at you so you can try out certain styles: daggers are wickedly fast, swords are swords, and you can use bows or fire shooting staffs. You also have magic powers regardless of your chosen field.

So in the end, after playing the demo for a couple of hours, Amalur remains an odd, odd bird. It’s trying to blend so many genres that I do wonder if it’s going to end up being great at any of them. The demo is terribly difficult to gauge. But – fact is, I want to play more. The skill trees look slick with some truly nasty powers at the higher levels.  The career progression with these weird cards has me intrigued and the combat really does have potential.

READ ALSO:  These Are a Few of Kotaku's Favorite Things