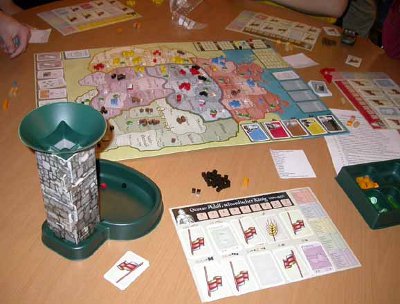 Erratic European publisher Queen Games has just managed to get its re-issue of Wallenstein (affectionately known as Wally to its fans) to the shelves of shops in over this side of the Atlantic. Previously printed in 2002, only available in German, and sold out to boot, the new edition is language independent and includes some expansions built-in. It’s ostensibly a game about the effects of thirty-years war in Renaissance Germany but the history of the game is, arguably, more interesting than the history it purports to depict.

You see Wallenstein belongs very firmly to the European school of game design. That means an emphasis on balanced starting positions and opportunities and strategy and a shift away from randomness and player interaction. In its extreme this paradigm results in sterile, tedious “spreadsheet games” where players are only competing in terms of finding the most efficient way to leverage a mathematical game system. But Wallenstein was an early example of a rebellion against that sterility, an attempt to find a middle ground whereby the best things about European games could  be captured while still allowing the players to interact directly and compete meaningfully. It belongs to a small, but growing, genre of games known as “Waros” (Euors with war, gettit?). It’s small because design wise it’s a very hard balancing act to get right, but it’s growing because when it is done right the results are often spectacular. Critically acclaimed games like Eclipse and my personal favourite Imperial belong roughly in this category.

It turns out there are actually quite a number of ways to allow players to tear chunks out of one another without spoiling balance or allowing the various bogeymen of player interaction that spring from players ganging up on one another to enter the game. Wallenstein takes perhaps the simplest: players have a fixed number of actions to undertake each turn and of these, aggressive actions form a small subset. So you simply don’t have enough opportunity to fight with your neighbours to allow alliances to determine the game, and indeed the scarcity of attack actions encourages you to use the optimally rather than waste them on grudges. But – and this is key – you can still do both these things if you like. The result is a pretty compelling game that can be sterile at times but which often manges to grab the best of both worlds.

Wallenstein’s other innovation, which remains unique in my experience, is the cube tower. The cube tower is an amazing invention that allows a strong random element in combat whilst almost guaranteeing that, unlike dice, the swings of luck will even out across all the players over the course of the game. It’s a tall cardboard tower inside which are several levels consisting of sheets of cardboard with small holes scattered irregularly across them. When players fight, they pour all the cubes representing the forces in the battle into the top of the tower. On the way down some will get trapped, some will dislodge cubes already inside and some make it all the way to the bottom and come out. The player who has more cubes that emerge from the bottom is the winner, and those that fail to come out are deemed to have been killed in combat. It’s a clever mechanic that’s really exciting and fun to use and, of course, if you get unlucky and have a bunch of cubes stuck in the tower from one battle, you’re guaranteed they’ll come out later to help out you.

The system was basically copied wholesale for another release, Shogun. The main difference was the map which, being based on Japan, is long and narrow rather than square like the representation of Germany in the Wallenstein map. It also has two sides in Shogun with slightly different border areas and sea routes. This has lead to slightly idiotic debates between fans of the two as to which is best. In Wallenstein players who end up with a lot of territory in the middle are at a disadvantage because they can be attacked from all sides. In Shogun there isn’t a middle so it doesn’t have this problem, but it also means there tends to be less attacks and that they get focused between the same players as adjoining borders are limited. Personally I prefer the greater interaction of Wallenstein and the theme too, and I also like one of the other differences which is random events: they’re global and affect all players equally in Shogun whereas in Wallenstein they’re tied to areas of the board and can affect some players more than others and I prefer the greater chaos.

But both are still excellent games, even if the “Waro” concept has been refined somewhat since they were released. If you want to get a feel for the system that underpins both games, you can play Wallenstein via email on Spiel By Web (along with Santiago, another one of my favourite European style games). I have no idea how they implement the cube tower in computer code, but it’s way less amusing than in real life. And personally I think everyone should get to play with one of those cool cube towers at least once.

11 thoughts to “Of Wallies and Waros”