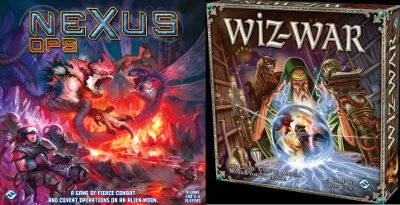 Looks like an interesting couple of weeks for board game releases. Fantasy Flight Games, undisputed kings of plastic components and overwrought game rules have got not one but two re-prints of classic games coming up…

The first of these – which will probably be in stores by the time you read this – is a revision of Nexus Ops. Originally released in 2005 under Hasbro’s short-live resurrection of the famous gaming imprint Avalon Hill, Nexus Ops became famous as a distillation of pretty much everything that was good and right and fun about brutal multi-player conflict games into a neat 1-2 hour package, leaving all the extraneous and often rather tedious baggage behind it. Each player got to pick and choose new troops from an array of spectacularly different unit types and march them forth onto a modular, hex-based board to discover stuff, mine ore for profit and mercilessly slaughter the enemy. At the heart of the system were randomly dealt mission cards that you had to fulfil to gain points toward victory: these were secret and much of the strategy in the game came from trying to set up situations that allowed you to fulfil multiple missions in one turn and come from nowhere to shoot into the lead or even to win. It had dice and cards galore and a great balance of randomness and strategy and player interaction.

The original also features one of the most bizarre gimmicks ever in game design, namely a board and transparent plastic pieces that glowed under UV light. It became infamous for the incredible smell of solvents given off when you opened the box. Fantasy Flight have chosen not to run with this but instead opted to give new players rather more detailed plastic sculpts and better board art instead. They’ve also, in contrast to almost all of their previous re-releases of older games, made virtually no changes at all to the very popular basic game (aside, I understand, to some minor re-working of a few cards) but have instead decided to build on top of it with variants, including a whole set of different unit powers to use. This is a wise move, given that the original is excellent and that some solid variants are about the only thing likely to persuade owners of the – once very valuable – original to trade up.

The other game which should be hitting the shelves in a week or two represents the culmination of a ten-year period of angst for designer and fans alike as Wiz-War finally emerges from development hell into the harsh light of the twenty-first century.  Originally designed in 1985 and sold in zip-lock bags full of low grade paper components, the game has each player cast as a wizard duking it out in a modular dungeon and trying to steal one-anothers treasure. The fun comes from the very large and very varied spell deck from which each player draws a hand of cards and which represent effects that range from classical monster summoning and the infamous Power Thrust to oddities like Sticky Stick and Curse Of The Litter Bug. Wiz-War was a cult gaming classic all through the 80’s and 90’s and went through a number of poor production quality editions before ending up with dice manufacturer Chessex who promised a new, upgraded edition before sitting on it for a decade. After inspiring gamers to construct countless home-made versions, they finally let it go to Fantasy Flight who are about to deliver the goods.

I have never played Wiz-War and I’m keenly looking forward to giving it a whirl, but it’s one of those games that seems to divide people right down the middle: you either love it or hate it. Fans wax rapturous about the atmosphere, theme and fun but mainly the endless variety and variability in the modular board, monsters and huge spell deck with its potential combinations and card stacks. Haters basically boil down to pointing out that the game has zero strategy. As a Wiz-War virgin I can’t make a claim for either camp but it is worth noting that in re-publishing previous low-strategy games Fantasy Flight have been unable to resist heavy tinkering with the game to up the thinking quotient with both good and bad results. From the looks of the rules and the preview cards they have, again, tweaked it in such a manner that old-school fans will be able to play by the old-school rules if they want to. It also looks like most of the changes are either to help clarify confusion around the old system or are small tweaks toward balance and strategy, promising that the game will still be a ton of chaotic fun with just a little bit more tactical choice which seems a sensible option to me. However, the meat of this game is in the cards and we won’t really know about any changes there until the game is released. Here’s hoping it’s done right, and here’s hoping that I should, fingers crossed, have a revie
w of this one up for you in a few weeks.

8 thoughts to “Blasts from the Past”