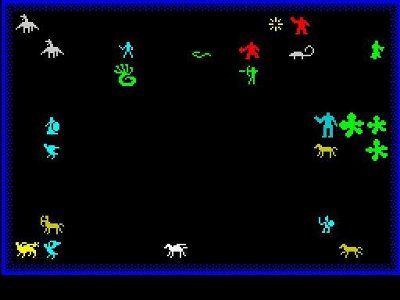 Like many small boys growing up in 1980’s Britain my first introduction to computing and computer gaming was the dreadful ZX Spectrum with its terrible colour bleed, clunky cassette loading and creepily tactile rubber keyboard. Most of the games I played on it were awful, but I played them because I had nothing else, but one was different. One was so good I still play it on emulators, occasionally, today.

That game was Chaos...

Chaos was the first (and until relatively recently the last) foray that Games Workshop took into computer game publishing, back in 1985. It featured up to eight wizards each of which could be human or computer controlled, trying to kill each other on a featureless battlefield. The wizards themselves were fairly puny so each had a randomly determined collection of spells. Some buffed the wizards, some were direct attacks, some were downright odd like Gooey Blob or Magic Wood, but most summoned creatures.

One of the many interesting things about Chaos was the fact that the more powerful creature spells had a higher chance of failing, so the player could choose instead to cast them as an illusion. Illusions always worked but could be instantly killed by the “disbelieve” spell that was available to all wizards and cast-able every turn. So every summons had an immediate risk/reward choice to make alongside it, giving the game more strategy than it might first appear. It appeared a very simple game on the surface but there was actually quite a lot going on under the bonnet (hood for those of you in the states). I’m not going to run it all down for you: you can read the rules and indeed play various versions of the game on this excellent fan page.

Everyone I know who played Chaos loved it. Every turn, every move was crammed with tension, not knowing what on the board was real, or what the other players had up their sleeves to cast that turn or even whether any of the spells lined up would work properly. Inevitably we all had our own suggestions about how the game could be improved and by far the most common was that it needed a non-random spell selection as some spells were more powerful than others so starting spell selection often determined the winner. Duly a sequel to the game, Lords of Chaos, appeared which included this alongside other upgrades such as big maps with terrain and an expanded spell palette. And, whilst not awful, it was nowhere near as much fun as the original. Giving players the chance to choose spells just meant they always picked the best, reducing the variety and fun in the game. And big maps with complex terrain made it take too long as well as reducing accessibility.

But so many people loved Chaos that it was never going to be left to die. On 16 bit machines there was a little know game called Celtic Legends which was clearly inspired by Chaos and was pretty good, even if it got a bit repetitive. But with the retro-gaming explosion in later years there were numerous people making copies of Chaos, most of which fell by the wayside either being unfinished or falling into the trap of trying to improve the game and rendering it rubbish. I’ve already pointed you at one of the few successes.

It struck me recently that it’d be an absolutely fantastic tablet or mobile phone game. So imagine my annoyance as an iPad owner to discover that it’s one of the tiny handful of games that’s available on Android but not iOS! I’m off to email the author about porting it – in the meantime I suggest you go back to my previous link and get playing it.