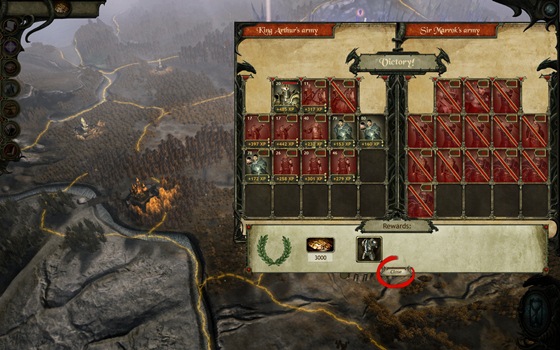 I played the original King Arthur and found it to be a mostly fun game that was brought down a bit by its brutal difficulty and weird Total War-like combat model. But it had magic. Not just magic but Pagan magic. (Always the best kind.)

I started messing around with “King Arthur II The Role-playing Wargame” today and I am terribly early in the campaign. As in, I just started it and have fought one whole battle against some Sherwood Rebels. But that’s enough to make a few bullet points…

* First off: the game CRAWLS on my PC. I am running Windows 7, a Core II Duo 3GHz with 3 GB of RAM and an AMD Radeon 6800 HD videocard with brand new drivers. So is this a screaming fast PC? No. It’s not. I know it’s not. But hoo boy it’s bad. I have a Dell 24″ flatscreen monitor and when games run at anything other than 1900×1200 resolution it looks a tad weird. This sucker, when I run th egame at the medium to low video settings runs at a blistering 8 frames per second on the OVERLAND map! That’s not even the battle map! The battles, oddly enough, run around 15-18 FPS, which is still not great but a hell of a lot better than 8.

Turns out I am not alone.

* The battle I fought against the Rebels was clearly an intro battle designed to get your feet wet. Still, this game looks to have a similar oddity that I know will be hard for me to get around.  Units don’t flee. I am so used to games like Shogun and Rome and Medieval where if a unit takes a ton of damage they up and run, as morale breaks. Here, those rebels fought to the death. No one was left alive. Cavalry charging some archers? They stand and fight. Additionally, I still have a hard time determining if I am winning or losing a battle. Total War fans are used to seeing that all important line “Winning Slightly” or some other hint as to how things are going. Here, all I get is some annoying advisor telling me,. “Your units are going to die!!!” He said this no less than 15 times in this battle.

Then I win the battle in a landslide. Um, ok. Can I fire that guy?

I think I know why the game does this “no retreat no surrender” thing. This is part strategy battle game and part RPG — it has a story to tell and you can’t very well have lingering armies wandering the landscape when they aren’t meant to be there. That’s just a guess, but that’s the best I can come up with as to why these fights are designed in such a way.

I hope to get these performance issues worked out because it’s going to be a real bitch evaluating it right now.

Time to turn everything on Low and see what that gets me.I hope it does as even with the flee issue, I want to dig into the story and kill some monsters.