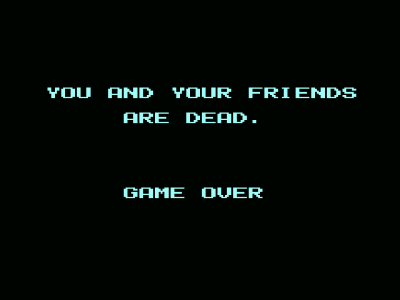 On my voyages through the world of gaming social media, one of my more interesting finds has been a company called Hide & Seek. It’s hard to define exactly what they do: some multimedia stuff, some mass-participation face to face social games but what binds it all together seems to be a desire to push the envelope of what “gaming” actually is. What they do is consistently on the thin boundaries that separate gaming from performance art. I haven’t played many of their games so I can’t really comment on how effective it is at making quality content, but what they write about their games is always fascinating.

The latest gem I picked up is this superb piece on death in video games. There’s a variety of interesting stuff in it. For starters it mentions Steel Battalion, an incredible Mecha simulation game that I’d never heard of because it was limited edition, cost £130 and came with a huge bespoke controller with 40 buttons. It featured the concept of perma-death, something that I’d only ever seen before in Rogue-like games. And as a Rogue-like veteran I have to say the author doesn’t really do this justice: having a character die after you’ve spent days of play time building it up is quite the most shocking, emotionally draining thing that I’ve ever had happen in a video game. But we won’t dwell on that as I’ve got a piece about Rogue-likes ready for next week.

It also mentions the first actual piece of video game performance art I’ve heard of. Which I won’t dwell on as it sounds extremely silly. Instead I’m going to fast forward to the end of the piece and a story about … (if you haven’t, go read the article now so as not to spoil it. I’ll still be here when you come back) … a game in which the author chose to “kill” his character and end the story when they could, possibly, have played on from a save. What I found interesting about this was the way in which that choice rendered the moment, the story and the entire game so much more meaningful for the gamer than the frustrating experience of picking it up and carrying on from a difficult save-game point.

Now I’ve done this a number of times in my gaming life: taken a save from a seemingly impossible point and tried and tried and tried again until I got lucky and got through it. And almost inevitably the frustrating experience of replaying a single portion of the game in which the odds are against you over and over again ruins the game in your memory. I’ve also frequently criticised video gaming as a whole in the past for lacking meaning and being, ultimately, an empty exercise in repetition. Not to mention ruminating over the decreased lack of difficulty in modern games. By taking responsibility and making a choice outside of the game plot itself which nevertheless has an impact on the game, the author has bypassed both these scenarios. And I can’t help but wonder if this isn’t what the video gaming world as a whole is missing, largely because gamers have never considered it: the ability to take a responsible decision and walk away at a point that renders the game meaningful to you rather than just taking the default route of trying over.

(if you’d like to know more about Hide & Seek then, in addition to visiting the site linked to above, try following their employees @ranarama or @severalbees on twitter – both full of excellent, fascinating material as well as apparently random lunacy.)

4 thoughts to “Dying and Living to Tell the Tale”