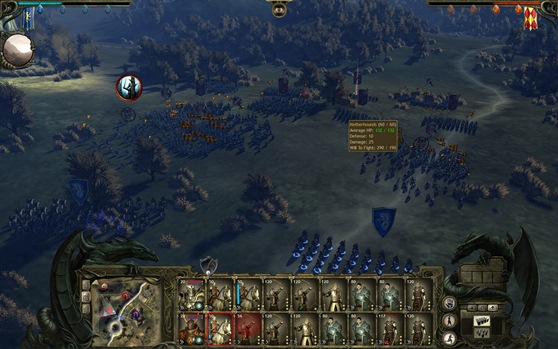 As you likely know, the full title is King Arthur II: The Role-Playing Wargame. On its face, it’s a hybrid strategy/war/role-playing game set in the world of Arthurian legend in Britannia. Take the battles of something like that of the Total War series, but add a lot of story based role-playing. Plus, there are demons and pagans and magic.

In fact, the world of King Arthur II is by far its strongest feature. I love the setting – it’s very much a low-fantasy world (perhaps aside from the multitude of magic items floating around). But anytime you mix real world medieval Europe (Britain in this case) and throw in cultists and old world pagan magic battling Christianity and the demons that are on the scene to take advantage of it …you have my attention. I love this sort of thing. I just eat it up. It’s Darklands.

Problem is, I’m about 10 hours into the campaign and much like the original—this is an odd bird.  I have a hard time calling it a wargame as it simply lacks a lot of features that would slide it into that category. The 3D battles lack a lot of the typical wargame trappings. Most wargames have these because they kind of matter. I still have so many questions:

Does flanking matter? I have no idea.

Why don’t units flee? Shouldn’t archers not try to stand up to charging cavalry? Shouldn’t a huge fireball placed in the middle of some pikemen cause them to sort of…not continue to walk forward? Those are seriously disciplined pikemen.  Screw Pickett’s Charge these guys walk through fireballs!

Where is the unit fatigue meter? Can my guys just run full speed the whole time?

If you come into KA2 from Shogun 2 you’re going to really miss these things when fighting the bad guys. Sure, KA2 has lightning bolts and giants and shapeshifters, which are admittedly really cool, but why abandon the basic tenants of tactical wargaming? I mean it’s in the title of the game, right? Why not have both? If I take my Camelot Cavalry and smash into the side of some weary swordsmen, they should turn tail and run. Right?

As I said in my initial KA2 post (http://nohighscores.com/2012/01/31/king-arthur-ii-the-role-playing-wargame-chug-chug/) I think the reason for this is that each fight needs to be a battle to the death to continue the RPG part of the story. You shouldn’t look at the screenshots and assume that this is some open world strategy game like a Total War product. It’s not that. You have specific quests that you need to do and specific battles that you need to fight in order to advance the story.

And KA2 rigidly tells that story – at least so far. I am about to start Chapter 3 of the campaign, which looks like a rather huge chapter but thus far I cannot even split my army. I have been running around southern Britannia for 10 hours with one mega-stack. I have other leaders in my army and reserves but it’s a mystery as to how to branch off and form another army. If that option is there I can’t find it.

You can technically go where you want, but the enemy AI units aren’t too keen on taking the initiative. I have watched the same enemy giant unit just wander around its territory for about 12 years now. Poor guy has to be bored out of his mind.

So I need to stress: This isn’t Shogun 2 with spells.

And really that’s ok. I don’t need it to be that, but I do need some basic interface design to show up and not to feel overwhelmed by “stuff” as I am right now. Your units, not just your heroes, level up by gaining XP. So your lowly pikemen can one day turn into bad ass pikemen. The issue here is that you can also assign skill points to these units and even give them new skills once they reach a certain level. You can boost HP, attack, defense, etc. All of which sounds great. But the game likes to hide this info when a battle starts.
Which archer unit did I give higher accuracy? Which has a stronger attack? Now, which heavy infantry did I want to make my front line tank units?  Ah screw it just throw ‘em all in the soup and attack. Unless you level up your units the same, it’s hard to know who is doing what.

The amount of skill and item juggling isn’t helped by the vast number of artifacts that you find. You get some new trinket after you complete a mission and I’m at the point now where I have more stuff than I can keep up with. Another ring that reduces spell cooldown? Um, ok. Throw it in the forge and give me some XP.

The “rpg” stuff is actually pretty neat. Much like the first game it’s like reading a choose your own adventure book. The writing is pretty good and it’s easy to get sucked into the story. But it all feels very much under the thumb of the developer and the game needs a bit more room to breathe. As I said, I’m only starting chapter 3 and that chapter looks like it’s a lot bigger than the first two so perhaps these criticisms will melt away as the story opens up a bit.

Oh, and I’m now running at a blistering 12 FPS on the overland map and turning off every sliver of game detail has me at 17-24 FPS during battles. Playable. Not ideal.