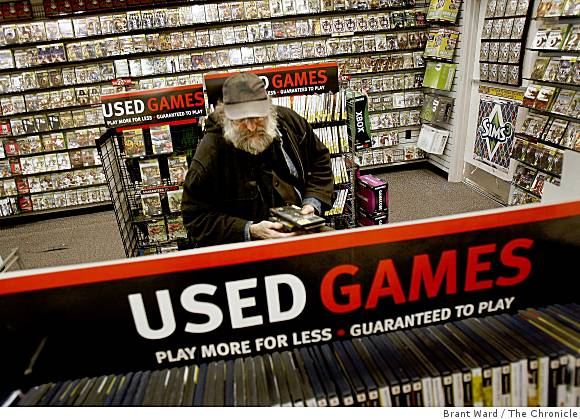 We love to pound on tables and shake our collective fists when a DRM story pops up online. Usually a big company says that it needs DRM to protect its IP from thieves, and we counter with “Wow, that’s some Grade A bullshit!” or something equally witty. Pirating is bad. DRM isn’t the answer. That’s my position, anyway.

The other push button issue is the idea that used games are killing the game industry. Between used games and DRM it’s a wonder we have any games to play at all.

“Most Game Developers will agree that the Used Games market is significantly impacting the revenue we receive.   I think what most consumers don’t realize is that every time they buy a used game, there is ZERO money making it back to the Game Developers.  All of those profits are going directly to the re-seller and making it more and more difficult for us to continue making higher quality products.”

I think most consumers very much understand that. We’re not idiots. We just don’t care.  I think that’s also secondary to the fact that most new games cost $59.99 and people are looking to save a little cash whenever they can. Does Durall actually think that the number of people buying used games give a damn about anything else other than saving 10 bucks on a game–one that if it’s buggy or just plain sucks cannot be returned for a refund? $59.99 for Homefront is some bullshit, no? We’re just supposed to take a company’s word that a game is super special?

READ ALSO:  Why I Think Borderlands 2 Sucks (But I Like It Anyway!)

Here’s where things really go off the rails:

“There’s another big rumor about the next Xbox console that could really start to shake things up…it won’t play used games at all!  Personally I think this would be a fantastic change for our business and even though the consumers would be up in arms about it at first…they will grow to understand why and that it won’t kill them.”

It won’t kill them? Well, no, it won’t do that. But it will piss off a legion of gamers and I was always taught that riling up your retail base was never a terribly good idea. Those same gamers who are selling games used are also buying games new.  How about this? How about instead of trying to figure out a way to screw a gamer out of saving 5 or 10 bucks – why not stop spending a gabillion dollars advertising shitty games and trying to pawn them off to the public as being more than what they really are? How about lowering the price of these 60 dollar time wasters?

“In the end, I fully believe that we have to do something about these issues or our industry is going to fall apart.  People often don’t understand the cost that goes into creating these huge experiences that we put on the shelves for only $60.”

Only $60. Yeah, ok. Must be nice living in that world – a world where rolling the dice on a $60 piece of software is no big deal. Let’s call that “Durall World”. The game industry is not dying due to used games. There are companies dying due to bad business decisions and sinking crazy development money into bad projects and advertising gaffes.

It’s not the guy buying Madden for $45 at GameStop.

Anyway, why should games be held to a different standard than any other industry? Used cars?  Ford didn’t get jack squat when I sold my old Tempo. Books? Music? Movies? What makes Saints Row special? If I buy a game for $60 (or $20 or whatever) I should be able to sell that game to whomever I wish – and developers should stay the hell out of my business. Speaking of that — didn’t GameStop also buy those copies from THQ?

At that point, isn’t it sort of fair game?

53 thoughts to “Are Used Games Really Killing the Game Industry?”