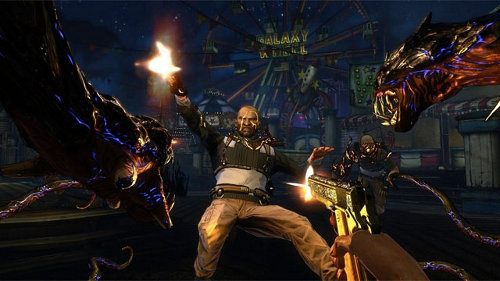 Honestly, I don’t know why I’m complaining about a lack of new games. I mean, I still have a ton of stuff to do in Skyrim and Assassins Creed: Revelations is sitting there, unplayed, staring at me all mopey-eyed. What do I care if there’s nothing new to play?

Oh right, because I have to write something every week telling you about the new games coming out this week. This week has supernatural shooting in two flavors, courtesy of Darkness II and Resident Evil: Revelations as well as some open-world RPGing courtesy of Amalur. There are some other nuggets in there too, so let’s get to it…

New Releases
First up is The Darkness II (360, PS3, PC), a game I’ve been playing since last week. The embargo is still in effect so I don’t know how much I can go into it, but I can tell you that I am enjoying my time with it immensely.  I have to figure out how much of that is due to it being a good game and not the general enjoyment that comes from rending a man asunder but that’s not something I have to worry about until I go to write the review. Speaking of which, I probably should do that.

Kingdoms of Amalur: Reckoning (360, PS3, PC) is a game that intrigues me, even if my interest in it doesn’t extend to getting off of my fat ass and playing the demo. I’m interested to see how it reviews. New IPs are a hard sell in this business, especially something as generically named as Amalur and folks seem to be evenly split on the demo.

READ ALSO:  Blasts from the Past

Resident Evil: Revelations provides a reason to play my 3DS but that would also require me to play a Resident Evil game and that’s not going to happen. There are too many RE-specific conventions that I just don’t like and I’ve played enough RE games to know it. I did play this one at E3 last year and it was pretty, but it’s also Resident Evil which, as I understand it, is kind of the point. I can’t blame a game for being what it’s supposed to be. I can just choose not to play it.

The Jak & Daxter Collection comes out this week, continuing the tradition of remastering popular PS2 games, bundling them up and selling them for a steal. I’d love to see how Naughty Dog made games in the pre-Uncharted era so I’ll definitely keep this game on the list of games to grab when I hit the summer doldrums. The Sly collection filled that gap nicely last year.

Finally, the Fallout: New Vegas Ultimate Edition is out (360, PS3, PC), brimming with all of the various DLC bits and bobs. I tried playing this game, put in about 8 hours and then quit because it was boring and I didn’t care about who shot my character. I assuming he’s still wandering the desert, searching for a courier or a can of beans or whatever stupid quest I left him on.

READ ALSO:  How Far Can the Assassin's Creed Train Keep a Rollin?