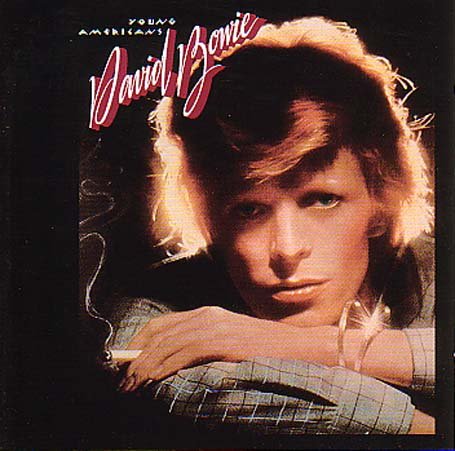 In 1974 David Bowie released an album called “Young Americans”, a top ten hit in the United States with a  number one single in “Fame”. After almost single-handedly defining glam rock with his outrageous, polysexual Ziggy Stardust character, Bowie completely changed his image and direction. Always a consummate artist aware of the importance of concept and execution, Bowie recrafted himself as a willfully phony Philadelphia soul man. The record is a meticulously crafted collection of R&B songs rife with the irony of a white Englishman earnestly performing music generally regarded as the province of African-Americans. It’s soul music without any soul at all, and that’s exactly the point.

He called it “plastic soul”. The record’s artifice is brilliant; its superficial, textbook genre survey of a highly organic music that thrives on authenticity is a statement in itself. From the Luther Vandross background vocals to “blushing at all the Afro-sheen”, it’s carefully poised and manufactured to spec.

So what does this all have to do with Kingdoms of Amalur: The Reckoning?

Kingdoms of Amalur also features this sense of manufactured artifice, a sense of bulletpoint design that comes from studying success rather than creating it on its own terms. I’m only around six hours into the game, but there is definitely a pervading sense that this particular supergroup development team has managed to come up with a supremely competent, expensive-looking, well-made and in some areas possibly great game that feels far too studied and much too designed to spec to come to life.  It has a plastic soul.

Like “Young Americans”, the game is a veritable checklist of genre qualities and elements that have worked in the past. Crafting, flexible classes, cooldown abilities, sidequests by the dozens, NPCs that prattle on and on about any topic you care to discuss (out of five provided), big swords, an open world that’s really a corridor world…the list goes on and on. It’s a catalog of modern RPG design tropes. This isn’t necessarily bad if there’s that sense of a living soul binding it all together. It doesn’t feel alive or immersive at all. You’re constantly aware of the design as a feature list.

The difference with “Young Americans” is that the record is artful and purposefully designed to be plastic, going through the motions of meeting genre qualifiers while simultaneously satirizing, mocking, and celebrating them. Kingdoms of Amalur has no such pretense. It’s simply trying to appease the most people most of the time. It feels almost cynical in its refusal to innovate, take risks, or challenge expectations.

It’s one of the most clinical, cold games I’ve ever played despite the warmth of the color palette and the Blizzardian mix of Warhammer brawn and cartoonish whimsy. Every single element is unsurprising, accommodating, and expected. Even the nomenclature is incredibly generic despite the clash of consonants and syllable-riffic place names. I’m thrilled to see Barghests and Kobolds in a Dungeons and Dragons game, but in a supposedly  all-new fantasy world- not so much. Also, somebody get a memo over to these guys. Kobolds don’t look like Gnolls.

The only thing that’s really surprising is how the assembly of this game feels so inexperienced and cluttered, as if it were from a first-time developer eager to please and finding its legs. The constituent parts are immaculate, professional, and evidence veterancy. But in gestalt they seem more like a kitchen sink than a focused game design.

I can see why some folks really like Kingdoms of Amalur. It’s definitely not an awful game at all, but every time I think about it, I feel like I’m hard pressed to come up with something remarkable about it. The combat is fun, fluid, and definitely more interesting than the kludgy tank battles of Skyrim, but frankly Soul Calibur V has an even better fighting system. But the benefit there is that you don’t have to sit through some gnome rambling on about some bullshit sidequest he wants you, some fateless shmoe, to do for a couple of ducats or a treasure you likely don’t need or want. Nor do you have to wander along until you find a bunch of robbers hanging out for you to beat up.

I don’t know how much longer I’ll stick with the game because it’s just not drawing me in. I loved the demo, but I almost feel like an hour was about all I needed out of this game. I could care less about the inscrutable and completely lifeless stories the game wants to tell me about Tuatha Bobatha and I’m still not clear how they’re going to tie Indiana Jones into the whole Well of Souls thing. If the game were more focused on core competencies- like Torchlight, for example- instead of trying to do it all, I’d probably be more interested. I can’t imagine spending 25 hours of mediocrity with it, let alone the 200 claimed by the developers. It’s almost certainly 200 hours of heartless, autopilot filler.

If the game were some kind of sly comment on the state of modern RPG design or subversive like “Young Americans”, I’d probably adore it. But it isn’t. It feels like product engineering more than game design, and its spiritual plasticity sets it quite far apart from games like Planescape: Torment, The Witcher, Baldur’s Gate, or other classic roleplaying games.