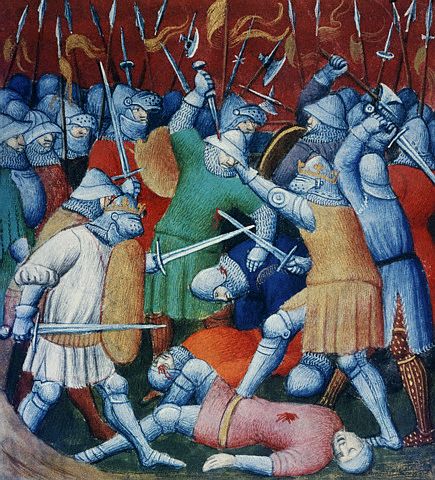 When we last left Malcom III, King of Scotland, he was contemplating whether to help King Harald, his Viking Father in Law in a war of independence in Norway. Malcom thought about it. Mulled it over in his keep. Raised a paltry army and …went hunting with his boys.

His scheming wife, the daughter of Harald, is still trying to have every low level potential heir to the throne killed in the most gruesome way imaginable. Good thing she’s a fertile lass. She’s power hungry and I am convinced totally nuts.

The immediate issue is that Moray has launched a Ducal War in Buchan. These Scottish nobles are bickering over scraps and Malcom isn’t powerful enough of a king to stop it. Scotland at this time has a king, sure, but the vassals can do basically what they want. If a Scottish Duke thinks he has a claim to another title he may just attack that noble without even telling Malcom what he’s up to. Malcom is loved at this point but not totally trusted and definitely not thought highly enough to be asked whether or not a noble can go to war. Independent buggers.

So it was quite a shock to see a quiet Scotland in 1077 and all of a sudden these armies just pop up and start duking it out.

After Moray kills Buchan and basically takes his land and titles, Moray then launches another attack on a claim in Argyll – which is under the thumb of the Duchy of the Isles, an area in western Scotland that I have wanted a piece of since I started the game.

Crusader Kings II is all about picking your spots when it comes to alliances. You don’t need to know the history to enjoy this game (it helps) but you do need to understand that picking your allies is crucial. Ever watch the show The Tudors? Or in a way A Game of Thrones? That’s what this game is like.

Moray, for example, is tight with Malcom. And even though he took Buchan I decide to support his claim to Argyll – this allows me to go to war and what do you know – but Moray DIES in the battle and his 10 year old son takes over control of his realm. Actually his regent takes over but seeing that I have a 12 year old daughter who thinks the kid is as cute as a button…and as luck would have it Little Moray has the traits “Weak” and “Ill” I REALLY don’t see that little rascal living past 20. And if he does I always have my lunatic wife I can call on in a pinch. So a marriage is in order and I wonder who is gonna get all this land when he dies?  I wonder….

Anyway after a tough fight Moray and Malcom combine to take Argyll and Scotland enters a time of peace. For four years very little happens in the highlands. Sure some nobles die and I switch up my council a bit. The local mayor dies. He was a dick though. A few kids come of age and get tutors. Oh, yeah, and Malcom decides to TOTALLY change the inheritance laws of the realm, issuing Gavelkind which makes my oldest son and his wife LOSE THEIR MIND.

READ ALSO:  NFS:MW, You Are No Burnout and That’s OK (I Guess)

Read this and you’ll see why. https://en.wikipedia.org/wiki/Gavelkind

In short, my eldest son isn’t going to get everything. This takes his opinion of me into the toilet but every other child I have now LOVES them some Malcom. They feel like they have a chance. Not that they’d …kill each other over this or anything.
Other than that not much happens for several years. I upgrade my keep…which in this era basically means adding a small wall and another market stall. Easy to forget 1080 Scotland is a pretty rough place even for the nobility.

And out of the blue The Pope Phone rings. This is rarely, if ever, good news.

The Pope, who is known to be incompetent,  has issued a Crusade in Ascalon. Sweet Jesus – in Ascalon? That requires taking a series of galleys from Scotland, sailing AROUND Spain, past Italy and waving at the Parthenon and landing in what is now modern Jordan. If I don’t do this the Pope – who remember doesn’t like me to begin with – could excommunicate me. That’s bad.

I’d call King Harald to help but he died in 1081. Norway is now almost totally in control of what was England with only a few pockets of resistance left. It’s just flat out cool to watch what would have been a world history changing event take place in a game.

So. 1080’s sailing tech, in Scotland (these are not Viking boats we have here) sailing all around the Mediterranean to land in a faraway land where we have NO idea how many pissed of Ascalonians will be waiting…

READ ALSO:  Mordin Solus: Where Mass Effect 3 Gets Everything Right

What could possibly go wrong?