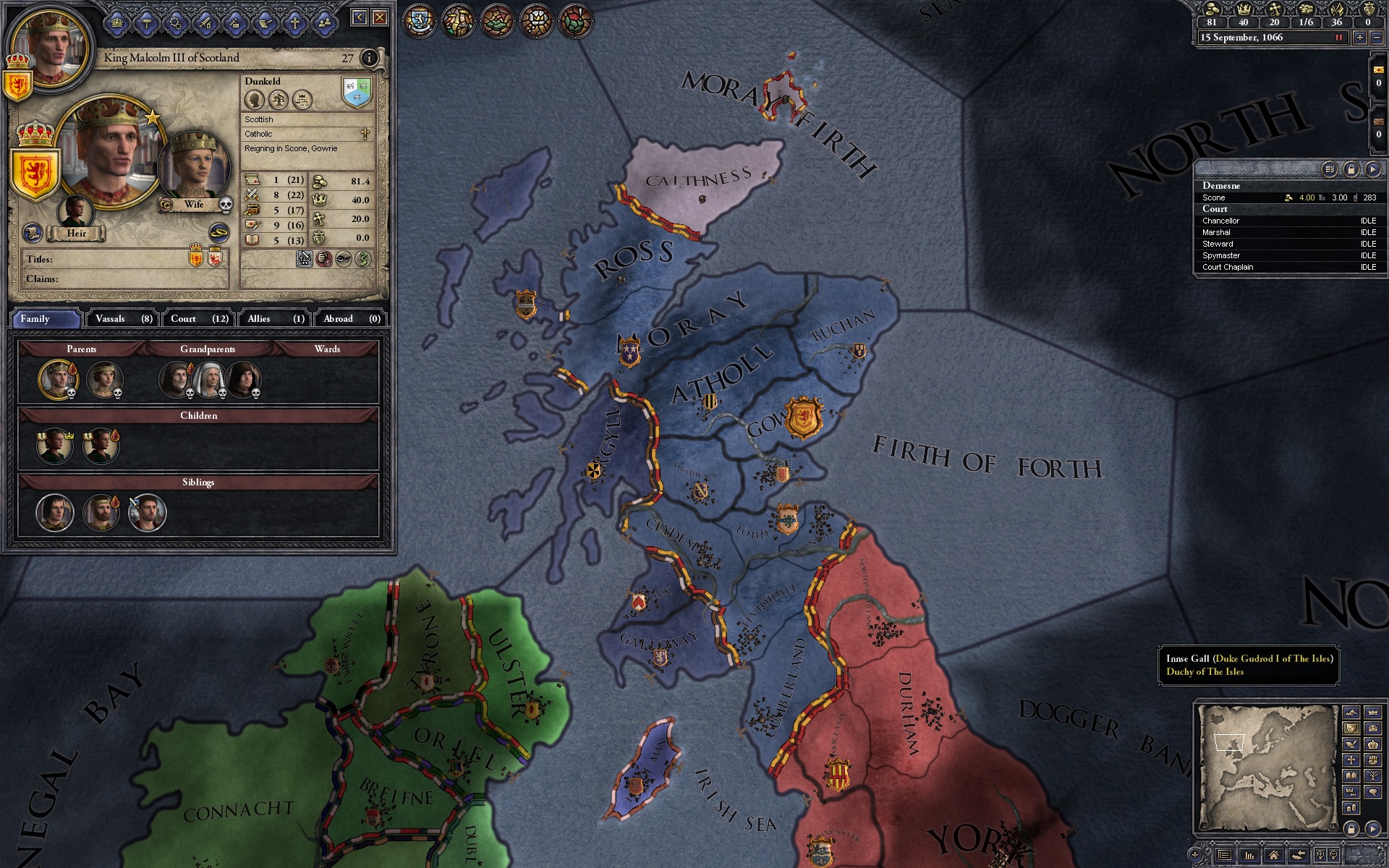 In real life, Malcolm III, King of Scotland, ruled from 1058 to 1093. He died marching back to Scotland and was ambushed by the Earl of Northumbria. He was succeeded by his younger brother, Donald III.

In Crusader Kings II…history had a different path for Malcolm…

The invasion of England by Norway was a success and England was basically removed from the map for a time, as only a few pockets of resistance held on. Instead of marrying Margaret of Wessex (later known as Saint Margaret) Malcolm married the daughter of King Harald of Norway. They would stay married for years – into their 60s. So what if she was insane? She loved Malcolm. She was just nuts. They would even receive the “Deeply in love” trait.

Malcolm’s sons, Duncan (the heir) and Domnall, start the game in 1066 as children: ages 9 and 8 respectively. Malcolm would have two children with the crazy Norwegian princess: a daughter named Elsa (who died at age 13) and a son named Gregory. Gregory would grow up to be a master theologian and serve on his father’s council.  He would later be cast out of the kingdom for being a homosexual heretic who demanded more land from his father.

Duncan, Malcom’s son, in real life ruled Scotland for a VERY brief time (1094) before being murdered. In Crusader Kings II Malcolm would outlive him. Duncan would die of illness at the age of 51 before ever taking the crown. Malcolm would reign into his 67th year on Earth – now old and gray, his lunatic wife still by his side, all of the crazy plots and demands to be made spymaster long forgotten.

Scotland, during the reign of Malcolm III would retake Caithness from Norway (King Harald was long dead and Norway’s queen had been excommunicated by The Pope so all was fair game and Caithness was Scotland’s to own.)  The Duke or Moray, vassal to Malcolm and lifelong loyalist to him, would embark on a mini crusade to take over Ireland in the name of Scotland. When Malcolm’s reign ended half of Ireland was flying Moray’s colors.

Malcolm would gain titles, win wars, and expand Scotland’s borders. The Isle of Man, Argyll, Galloway and Carrick would all submit to Malcolm’s authority. He would expand crown authority in Scotland, adding more and more money to the coffers.

Norway would slowly lose ground in what was southern England and the country of Lancaster would be founded in its place. France would take over much of Spain and Poland would dominate Eastern Europe.

As Malcolm’s reign neared its end, his grandson, John, the son of his dead father Duncan, would claim heir rights and was next in line to take Malcolm’s crown. John would make claims on lands owned by Malcolm while he was still King. Malcolm was a warrior king and was planning to confront his grandson, who was clearly power hungry and couldn’t wait his turn…

…when a giant meteor slammed into the planet in the year 1109 and killed every living thing on it. In other words, I added the latest patch and it killed my save game file, losing Malcolm’s journey forever to the sands of time.

Oh well. Time to try out the Hundred Years’ War …

14 thoughts to “Crusader Kings II: Haggis for Everyone!”