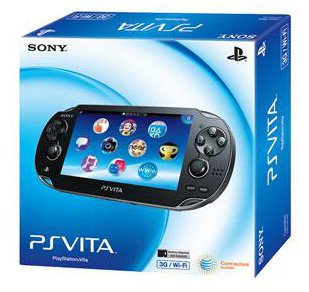 On the plus side, you no longer need to have the system fully charged, plugged in and surrounded by a HAZMAT team in order to apply an update. Whatever catastrophic event that would unfold should your PSP lose power during a system update has either been fixed or Sony no longer cares about the apocalypse coming about because someone can’t be bothered to go find their power cord.

Knock Two Times on the Screen if You Love Me
Using the Vita is an exercise in tapping and holding and button manipulation like no other device. When my daughter has to do her OT for her fine motor control we always have to remind her to use her “good guys”: her index finger and thumb. Any other fingers are bad guys. Bad, horrible guys. Villains, really. I say this because your good guys will get a hell of a workout with this device.

For one, you can’t just press the power button to turn it on. You have to PRESS the power button. Seriously. You have to hold it down for five seconds. That doesn’t seem like a lot, until the first time you turn it on and you’re all like “What the hell, this thing won’t turn on.” I don’t know why you have to hold down the button for so long. It’s not like you would carry this thing around in your pocket and accidentally turn it on. It’s huge and not at all pocket friendly and subjecting the screen to possible key scratches or other dings sounds like a recipe for disaster. Most likely you have a case for it, or an armored car, so accidentally turning it on shouldn’t be an issue.

Once the system is on, you have to peel back the layer to get to the UI, because why would you want to just go right to it? Then, when you want to launch something from the jolly, candy-like buttons, you have to press once to open the button and then press again to say you want to launch whatever you just said you wanted to launch. Oh, you want to play Lumines? Are you sure? Ok, here’s Lumines. Part of this is because the games no longer come with manuals because we all live in the future and paper has been extinct for years, purged during the Machine Wars. When you launch the games, the launched but not launched screen has a place where you can launch the manual and find out how to best stroke Nathan Drake. This also allows you to launch any other Vita frippery like Near or Far or I Don’t Give A Shit If My Friends Know That I’m Playing Hot Shots. See, the system isn’t keeping you from playing your game, it’s allowing you more options to play it the right way. Silly you! You thought you just wanted to race some cyber cars! Idiot.

Background Downloading is A Thing, Except for When It Isn’t
The Vita has the ability to queue up items from the PSN store and let them happily download in the background, however in true Sony fashion, it can be a bit tough to wrangle. Let’s say you go to the PSN store and grab the free Vita games that let you use the AR cards that come with the system, or maybe you want to give the Unit 13 demo a try. It’s pretty easy to queue them up and it’s also pretty easy to tap the upper right corner of the main screen and see the downloading progress.

Let’s say you don’t want to wait for the awesome cliff diving game and you want to play some Uncharted. Cool. Once you start the game, you’re told that NETWORKING FEATURES HAVE BEEN DISABLED. Uh, ok. Not sure why you have to yell at me, or why the network has to be disabled for a game with no co-op or multiplayer, but I guess you need to keep the pipe open in case I want to use Near and trade useless in-game treasure items for other useless in-game treasure items. Whatever. When you’re done plundering indigenous peoples, exit the game and check the status of your downloads, they’ll all have error codes. OH NOES! WHAT HAPPENED?!?!?!?! What happened was that the networking features were disabled. Of course, the error code doesn’t tell you this, nor is there any way to find out what the error code is without sprinkling some Google dust on it. I would argue that wasn’t an error, it happened by design. Simply pausing the download and letting you manually restart it, or, better yet starting it automatically, Xbox 360 style, would have been the better idea. But, what do I know? Why not scare the consumer unnecessarily? Where’s the fun in that?

Similarly, if you let the system naturally drift off into sleep, the background downloading will continue. If you press the button to make it go to sleep, it won’t. Take that Mr. Bossypants! Your Vita won’t be told by anyone when it can and can not go to sleep. You’re not the boss of it! I hope you like waiting longer for that fireworks game that you’re going to delete after playing once. No one puts Vita in the corner!

You Love Motion, Seriously
Cast your memory back to when the PS3 first came out and Sony was all like “Rumble can eat our dust! SIXAXIS is where it’s at!” Remember how shitty it was to have to tilt the controller to throw a grenade in Uncharted, or tilt the controller to keep Nathan from falling off a log, or all of Lair? Yeah, well all of that shit, and more, is back for the Vita. Some games are understated, like Lumines and Rayman Origins. Others, like Uncharted, are not. Luckily Uncharted gives you other options, most of the time, but you’ll still have to swipe your finger to dodge melee blows, or cut down tarps or clean off dirty, old helmets. That last one has an extra dose of touching as you use the back touchscreen to rotate your dirty helmet. Yeah, that’s right, spin it all over. Oh no, it’s not clean yet. Pervert.

Some of the motion/touch stuff in Uncharted is actually well done. Using auto-aim to snap to an enemy’s chest and then slightly tilting the Vita to adjust your aim for headshots is well done. Tracing your finger along a line of ledges for Nate to traverse is also well done, as is tilting the system for him to stretch out his arm to the next ledge. On the other hand, tilting the system to keep him from losing his balance is way too touchy, not to mention how stupid it is for him to die from falling ten feet on to a walkway. The back touchpad stuff is pretty silly and I ignore it whenever I can. Never mind that it makes no sense, having you stroke down to climb up a vine and vice verse, it’s just not comfortable to play so that your fingers can be ready at a moment’s notice to stroke the obstacle du jour.

I’m sure that someone has some good ideas for the back touchscreen but if it’s in the four games I have, I’ve yet to see it.

Be Happy With What You Have
The best piece of advice I can give you is to not worry about all of the things that the Vita doesn’t do well, like Twitter and Facebook shenanigans and instead focus on what it does well, which is provide some console level graphics and control in a portable package. The reality is that the battery is taxed so much as it is, I think expecting this thing to do everything is more trouble than it’s worth. I have a phone for phone type things and I’m not going to bust out my Vita to use Google Maps. I want the Vita to play games and everything else just takes precious minutes away from the battery.

I have a phone, a Vita, a 3DS and an iPad and I’m happy to keep them all in their own little worlds and let them shine at what they do best. I don’t want to play Fairway Solitaire on the Vita because, most likely, it will cost a hell of a lot more than three bucks and it shines on that big iPad screen. I don’t want to play an Uncharted port on the iPad (not that there is one) because virtual controls suck. I want the things I buy to do the things they’re best suited to do, and right now, for the Vita that’s playing games. I’m ok with that, and if you keep that in mind, I think you will be too.

If these tips weren’t enough, the