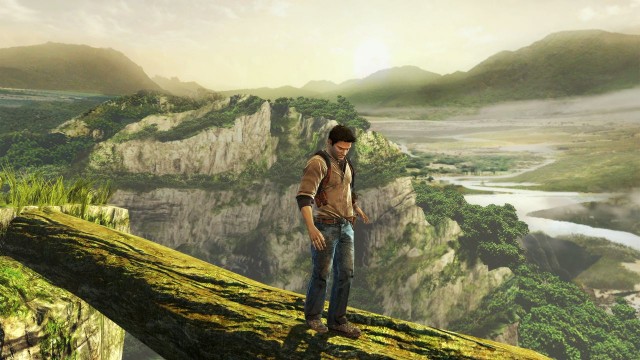 Launch games are a tough sell for any console, especially consoles brimming with features other than the customary jump in graphical fidelity. Launch games typically don’t have the benefit of years of familiarity with the hardware and they bear the brunt of increased scrutiny compared to games later in the console’s life cycle. One of the best ways to combat this is to come out with a game from an extremely popular franchise and hope that the combination of quality and nostalgia are enough to overcome any shortcomings. So is the case with Uncharted: Golden Abyss, one of the launch games for Sony’s new hi-tech handheld, the PS Vita. As a game to show off the Vita’s technology, it does a great job of showing the possibilities of the platform. As an Uncharted game it doesn’t fare as well, unable to reach the same heights as previous games in the series. Somehow it all averages out though, giving fans of handheld gaming the thrill of navigating collapsing jungle temples during their daily commute.

Set prior to the events in the first Uncharted, Golden Abyss picks up mid-story, as Uncharted games are wont to do, with treasure seeker Nathan Drake scaling a temple in a Central American jungle while trying to evade a small army of goons. Between the way the story starts at the mid-point before jumping back to the beginning, the move set of Drake when scaling heights and meleeing enemies, and the familiar sounds of Nolan North’s voice acting, it’s clear that this is Uncharted. Not a stripped down port, or a featureless representation of Uncharted, but Uncharted, warts in all, just in handheld form.

As a game used to show off the increased graphical power of the Vita, you’d be hard pressed to come up with a better choice. The lush colorful Central American jungle pops in beautiful detail, as does the temples and dig sites found therein. Drake moves the way we expect him to move, with the same motion captured fluidity of the PS3 versions. Moving Drake around works well, whichever of the various controls schemes you choose to use. Purists can stick with buttons and the control sticks however using your finger to trace a ledge path for Nathan provides a satisfying and oddly futuristic take on platforming. Using the Vita’s back panel for traversing temples isn’t as sure of a thing, in part due to a strange reversal of actions that have you stroking downwards to climb up ropes and vice verse, and in part due to using the same fingers for support as for movement. 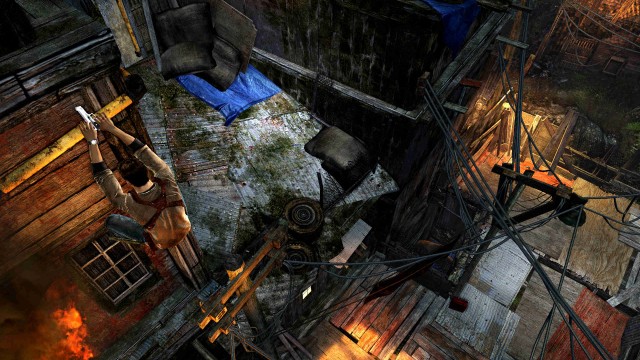 There’s a fair amount of touchscreen swiping to be done, even if you forego it when platforming. The QTE’s used in other Uncharted games for counters during melee bouts have been replaced with touchscreen swiping. Similar events pop up when you’re making your way across ledges, requiring you to pay attention or plummet to your death. The same thing happens with the occasional balance beam section, where you have to tilt the Vita to regain Drake’s footing. The swiping is fine, however the balance stuff feels tacked on and worse, sometimes Drake will fall ten feet to his death, a drop much smaller than one experienced by a side character later in the game without death as a result. Even if you don’t do much melee killing, expect a whole bunch of swipe fighting towards the end, as two extended bouts of fisticuffs require you to make with the touching. It’s interesting to see how the swipe motions correspond to Drake’s actions, but these fights go on a bit too long for when they occur.

This being a prequel, not all of the familiar faces of the Uncharted universe are present, replaced with new characters: Drake’s slick and ultimately untrustworthy employer Dante and Marisa Chase, a female archaeologist looking for her missing grandfather and a link between a Spanish friar and a city of gold. The game eschews the global catastrophe and supernatural trappings of the previous games, attempting a more personal tale in the process however time and time again Drake is reminded that this is just a job for him, it’s not his concern, and after a while, you start to believe it. Throw in a general funding a small war via the sale of drugs and looted artifacts, hardly the stuff of the scope of previous Uncharted games, and you have a conflict that seems decidedly lightweight. 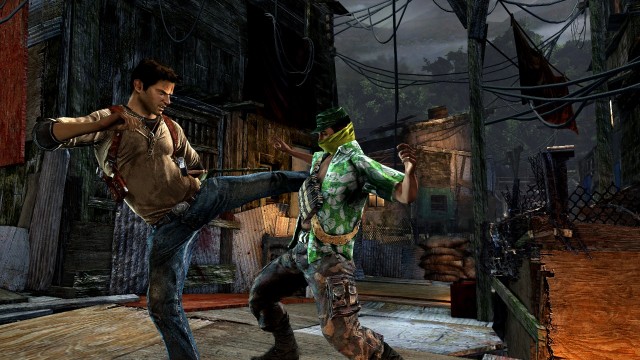 Regardless of the motivations behind the gunplay, Drake does get shot at, a lot, and it’s here that the Vita really shines as a platform. No longer constrained to a set of face buttons for moving or aiming, the dual thumbsticks allows you to pull off head shots with the same precision as a standard controller. Better yet, the Vita’s gyroscope allows you to fine tune aiming, providing one of the best uses of the technology I’ve seen on a handheld. Enemy AI ramps up fairly well, with light enemies moving between cover and peeking out from the side of a box, usually when you have your sights trained at the top of their cover. Once the armored enemies show up, they rush with impunity, requiring you to prioritize targets lest you see the familiar black and white screen of Drake’s demise, the sound of Drake’s screamed name echoing in your ears.

Multiplayer doesn’t exist in any form, neither competetive nor cooperative, however Bend Studios gives you plenty of reasons to keep playing once the story has ended, with hundreds of collectibles strewn about the jungle. There are trinkets to find, little stone deities, jade glyphs, pieces of the missing archaeologist’s equipment, charcoal rubbings to be made by rubbing the touchscreen, photos to take using the system’s gyroscope as well as other bits and bobs that help illuminate the game’s story. You won’t get anything for finding all of these, other than trophies and greater narrative insight, but if you have a collectible itch, this is definitely the game to scratch it. 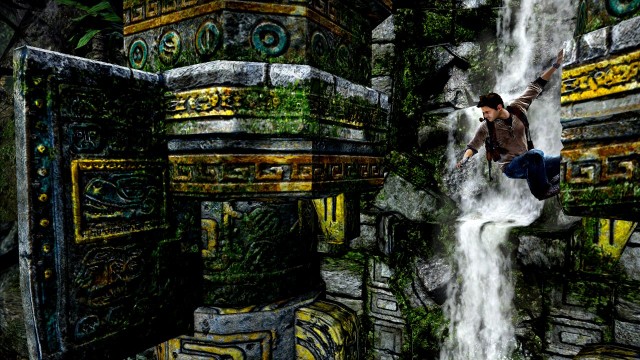 Once the Vita has been on the market for a couple of years and there are plenty of games that match Uncharted’s visual fidelity only without all of the Sony mandated motion stuff, it’s hard to say where this game will fare against them.We’re not there however and despite the narrative failings and occasional technologically mandated frippery, Uncharted: Golden Abyss lets you bring Nathan Drake on to the train, half-tuck and rapier wit in tow. As launch games go, you could do a whole heck of a lot worse.