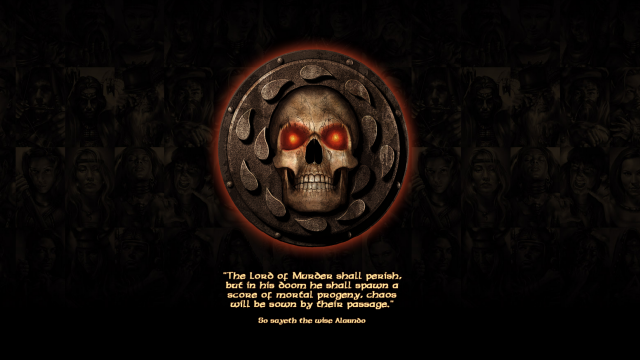 I was going to ignore this story because there’s nothing that bores me more in this industry than rumor mongering, but when the name Baldur’s Gate is attached it’s hard not to sit up and pay attention. Then GameBanshee did a little legwork and it got a little more interesting. First, if you head over to BaldursGate.com and inspect the code behind the page you’ll find the following…

The code was updated again a day later, with this:

First: Yay, Boo! I live for references to Boo! Miniature Giant Space Hamsters For The Win!

Yes, I know. I have a problem.

Now, when I first read the original snippet at another site, entirely out of context, I thought that could more less mean anything, but that was because the original story I saw neglected to indicate the updated date at the top nor that the webpage itself was new. Then Game Banshee spoke to former BG designer Trent Oster, now of Beamdog (oddly, a digital distribution platform), and confirmed (for those willing to read between the lines) there’s something up and it’s nothing to do with the games coming to Steam.

So, it could be a new game. It could be a refresh of the Infinity Engine. Could be an iOS port. Could be they’re all just jerking us around. I dunno. I’m not totally sure it’s not just Bill playing an extremely well-planned and orchestrated prank specifically on me. He’s been known to do that… from time to time.

Although I am no super-sleuth about this stuff –who has the time?– it’s impossible not to notice the last line in the code invites users to check out the tapestry for clues. Said tapestry (which I assume is the background on the webpage) consists solely of character portraits from the original Baldur’s Gate. I’m firmly in the camp that thinks this will be some kind of remake of the original or new platform (iOS) release.

So the question is, does the world need either of these things?

I can tell you, for my money, it’s an easy “yes.” You put the original game on iOS. Sold. You remake the game from scratch. So long as it doesn’t look like it’s going to suck, I’m gonna play it. Take the Infinity Engine and HD-ify it some way. Yeah, I’d probably play that too. It’s Baldur’s frigg’n Gate. You had me at “hello.” I’m not the rest of the world, though.

What you can bet is that we’ll have a good indication of what faith whichever publisher is actually attached to this has based on what it turns out to be. An iOS port just means, “Hey, we think we can get a few bucks out of this.” So does an quickie up-res’d remake of the original game. A from scratch remake says there’s a lot of faith in what the Baldur’s Gate name represents and what can be wrung out of it. There’s also publishing rights to consider. I don’t know who owns the ability to do what with this franchise anymore. As far as I know, and according to RPS, Atari still holds the rights to Baldur’s Gate. I did a quick Google search to see if I could confirm just what Atari really owns here: The rights to everything D&D? The rights to the original game code? The right to specifically publish anything with the BG name? I came up snake-eyes on anything specific, but the Baldur’s Gate series wiki does have the following:

On February 7, 2010, in an interview about Mass Effect 2, IGN asked Ray Muzyka of BioWare about the future of Baldur’s Gate, noting the sighting of Boo in the Citadel souvenir shop. He replied, ‘Hey, that’s just a space hamster. Boo’s brother. And again, you’ll have to talk to Atari about that, they’ve got the license.’[7]

If Atari is at the helm of this thing you almost immediately have to look at it with a skeptical eye. Sorry, but it is what it is.

For what it’s worth, I think these games could work really well on an iOS format. You’ve got very little voicing necessary, mostly just the engine and heaps and heaps of text. Touch and dragging on the screen ought to work with the pausable real-time combat model, although precision might be an issue, and certainly character and inventory management shouldn’t be particularly challenging to implement. Certainly nostalgia alone would drive a lot of people to try the game out on their iPads if the price were reasonably fair. I know I would, though I wouldn’t place odds on my finishing the game.

That said, would there be quite so much teasing going on for a port or “HD” remake? This has the smell of something a bit bigger. I hate getting caught up in hype that’s obviously crafted specifically to play on people’s warm fuzzies for a much beloved franchise, but dammit, it’s working on me.