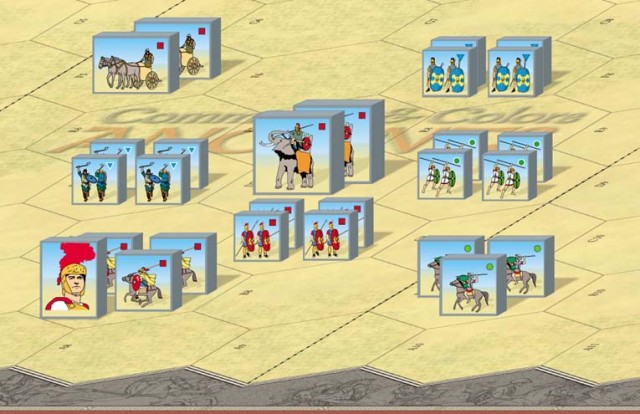 Playdek is quickly becoming one of my favorite companies. Ascension, the upcoming Nightfall, Summoner Wars, hell even Agricola, a game I don’t even like. Taking these games to iOS is great for the hobby I love.

But today? Today Playdek leaped to hugs and kisses status as the company has inked a deal with GMT Games to bring forth one of the best 2-player wargames of all time to an iPad near you.

Time to get your Hannibal on as Commands & Colors: Ancients will be ported to the iPad, iPhone and “other devices”. Finally, it appears that boardgame companies are waking up to the fact that there’s this technology out there that could help them sell more games.

And this one? This one’s a keeper. Someone wake up Barnes. I’m sure he just passed out. PR Ahead.

Playdek, a leading mobile video game publisher, today announced it has partnered with GMT Games, a leading developer of multiple award-winning wargames and strategy board games, to bring the company’s popular Commands & Colors franchise to the digital platform. The first game released will be based on the wildly successful Commands & Colors: Ancients and will allow mobile gamers to experience the intensity of ancient warfare virtually anywhere via smart phone or tablet device.

The Commands & Colors: Ancients game allows players to experience the rush of ancient battle and gain insights into the tactics of the great Greek and Roman military leaders. The game is fast-playing yet historically detailed and its faithful audience has clamored for multiple printings and expansion packs. Based on the success of this series, GMT released Commands & Colors: Napoleonics allowing players to relive the intense strategic world of the Napoleonic battlefield.

“GMT’s wargames series are phenomenally detailed and historically accurate. The games translate well into the digital realm and will make amazing mobile games,” said, Joel Goodman, CEO, Playdek. “We respect GMT’s great game design and are honored to bring these to life in a new format to reach all new audiences.”

“We are thrilled to be working with the outstanding professional team at Playdek. They have a passion for games and they pay extreme attention to detail,” said Gene Billingsley, founder, GMT Games. “When the opportunity came to work with such a talented group with a track record of creating immersive, well-designed, and thoroughly-tested games, we jumped at the chance.”

Look for the first games from the Playdek and GMT Games partnership to arrive later in 2012. For more information, please go to www.playdekgames.com.

15 thoughts to “Playdek to Bring Commands & Colors: Ancients to iOS”