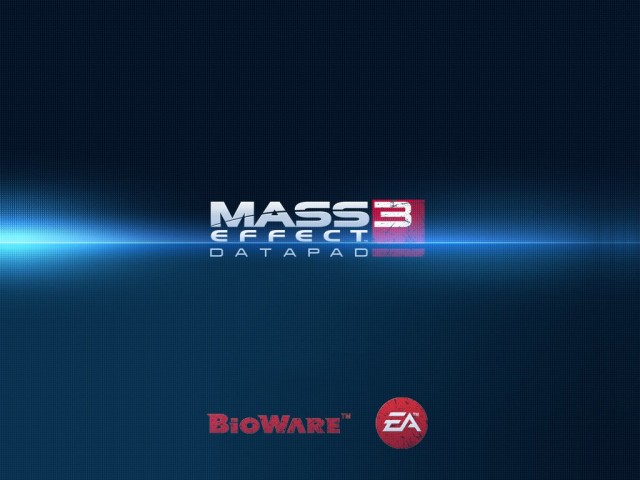 The Mass Effect 3 Datapad was released yesterday for the iPad and iPhone and me being a good little iOS gamer and Mass Effect aficionado, I picked it up. Before we get too far into things, here are the important things to keep in mind.

Two, it does not suck.

I call that a winner on all fronts. 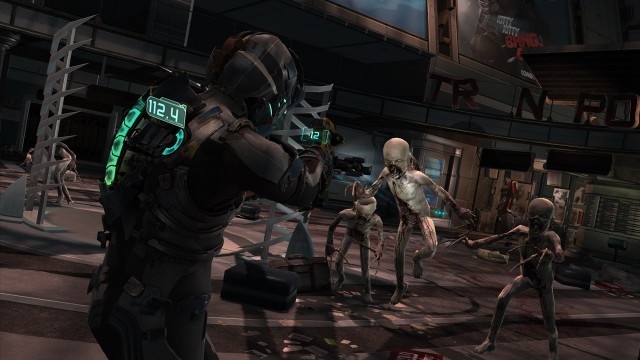 As transmedia products go, this is by far the least intrusive and most unnecessary product of the Mass Effect 3 tie-ins, which is probably why it’s free. More on that later, though.

As a rule, I don’t have a problem with transmedia and companion apps and stuff, mostly because I safely ignore all of it. In some cases, like Dead Space 2, ignoring the books and comics and gourmet cake decorations was difficult as it made the game’s narrative nigh incomprehensible, however it didn’t make me want to go out and experience these things. It just made me never want to play a Dead Space game again.

I can understand the feeling though that all of this extra stuff is designed to make the consumer feel like they’re not getting the complete experience, and when viewed in that light, it’s insidious. I’m all for creators getting paid, but there comes a point where you have to think of the consumer and the type of experience you’re providing for them. Luckily I’m immune to most of this crap. Sure, I bought all of the Mass Effect DLC, including the terrible ME1 DLC, but not because I was afraid that I’d miss out on anything. I genuinely like playing Mass Effect. If I was afraid of missing out on things, I would have read the comics and the books and bought the lunch pail, none of which happened. Hell, I didn’t even notice that at the beginning of ME3, Shepard references stuff that happened in Arrival, a piece of ME2 DLC that I bought and played. The truth of the matter is that I have too many options for entertaining myself to waste time and money on properties that aren’t interested in providing a complete experience for my entertainment dollar. 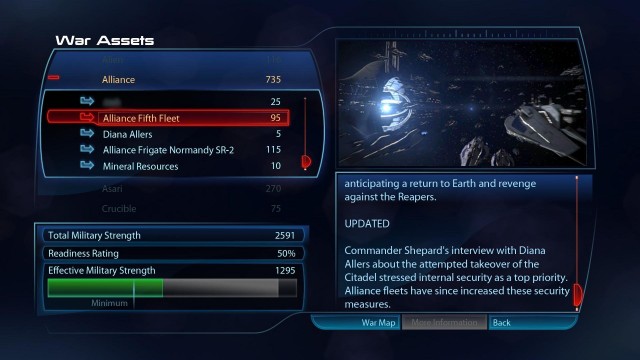 What I do have a weakness for though, is collecting stuff and filling up bars.

Mass Effect 3 is filled with bars, all of which come together to tell you how badly you’re going to get your ass kicked should you decide to pick a fight with the Reapers at this very moment. One of the bars is filled by finding stuff in ME3, a task I am dutifully committed to for no other reason than making the number associated with that bar as large as possible. The second bar is Galactic Readiness, the statistic raised by the companion apps and the multiplayer modes. That bar x the first bar makes a third bar.

I know that these bars have a narrative purpose, but for me, they’re bars and I need to fill them.

The Datapad app lets me fill my Galactic Readiness bar via a fleet deployment mini-game. For those of you that scoff at how this ties into the game proper, rest assured, the datapad is designed as if you were Shepard him/herself. As you complete story beats in the game and interact with different characters, you can get emails from those characters, emails that reference things you’ve done. It’s hokey, but it works. They’re mostly one liners, but they do a good job of making you feel like your crew isn’t just sitting around waiting for you to come up and talk to them about weapon load-outs and how much they want to kick the Reapers in the teeth. One of the lines made me laugh out loud, for what it’s worth. 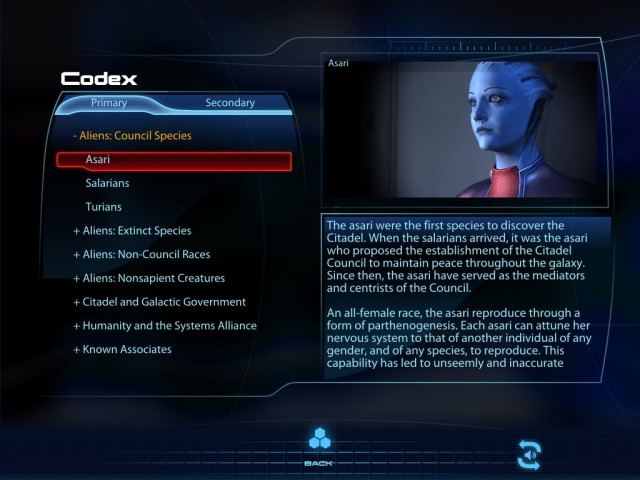 The datapad also contains the game’s codex, something I very much appreciate. On any given day, I don’t have but an hour or two to play ME3 and I’m sure as hell not going to spend that time reading the codex. Don’t get me wrong, I want to read the codex, especially because every time a Hanar burps within earshot, it unlocks a codex entry on the Hanarian digestive process and I’d hate to think that the intern who had to consult or write the Hanarian intestine entry in BioWare’s Mass Effect Bible feels like their work has gone unnoticed. It’s just that I don’t have the time to sit there and read anything, not when the clock’s a’ tickin’. I do, however, have the time to scroll through the codex while watching an episode of The Mentalist. 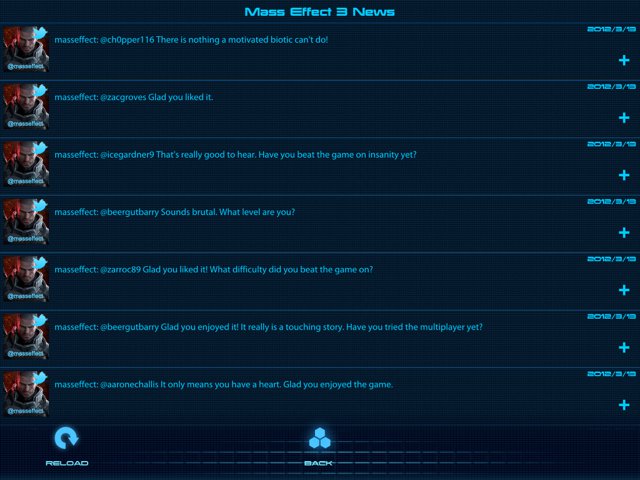 The Mass Effect information tab, consisting solely of tweets from the Mass Effect Twitter feed about how much people love Mass Effect, is less effective in making you feel like you’re Commander Shepard. In light of the various fan problems with Mass Effect, it does come across as if they’re trying to say “SEE, PEOPLE LOVE US” as loudly as humanly possible, but whatever. Maybe there will be news at some point but probably not. The media section has movies and screen shots of the game, for what purpose I have no idea. 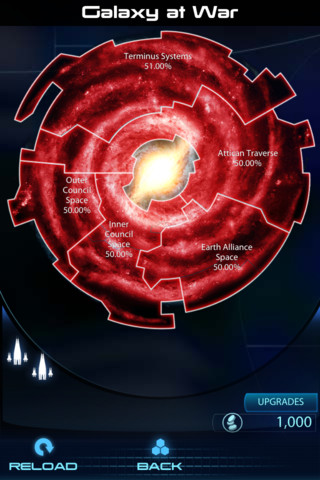 For me and my bar filling compulsion though, the fleet deployment mini-game is where it’s at. It feels like a freemium Facebook game in that the game limits you from abusing the game to get too galactically ready, however it doesn’t allow you to pay your way out of said limitations, unlike a freemium Facebook game. In every sector of the Galactic Readiness map, there are three conflicts you can send your fleets to. One usually takes about an hour to complete, but has a very low readiness and monetary payout. The middle one offers more, but usually takes three hours. The biggest one offers even more, but takes about six hours. You can buy upgrades to get more fleets or increase your readiness or decrease the time it takes to complete missions, but even with the bonuses, you won’t be getting to 100% readiness in a day or so, if that’s your plan. Once the mission time has expired, your fleet can be redeployed, provided they’re not crippled, a state that takes about an hour to get out of, somewhat lessening the meaning of the word “crippled” in the process. It reminds me a lot of the assassin deployment minigame within AC: Brotherhood.

The key seems to be maximizing your fleet deployment to coincide with your availability. For example, when I got up this morning, I deployed my fleets to an hour long skirmish with the thinking that by the time I worked out and got ready for work, the mission would be complete before I had to leave. They were, so I queued up a six hour mission while I’m at work. When I get home, I’ll queue up some three hour missions. Those should be done right around when I’d be sitting down to watch some TV, so I’ll do a couple of one hours until bedtime, at which point I’ll queue up three more six hour missions. Tomorrow, I’ll do it all over again. 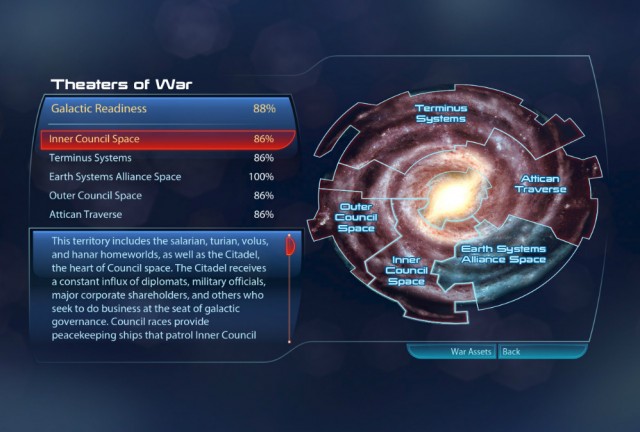 I honestly don’t care how much galactic readiness I get, as I don’t think I’ll get too much more than what is needed to keep the level from decreasing daily, but the appeal of filling that bar is a strong one. Let’s not forget that I spend months upon months getting every Pokemon out of the Pokewalker and once I did, I did fuck all with them. They’re still sitting in my SoulSilver cart, collecting dust and wondering why the Bad Man took them away from their home.

As a companion app, the less is more approach and utility of the Datapad makes it a far better choice than the Infiltrator app, as does the price: zero dollars and zero sense. If you’re interested in nothing but getting increased Galactic Readiness, I have a feeling that Infiltrator will be better as I increased my GR by 10% by the end of that game. I wish I had known that GR decreases every day and not traded in all of my intel for a GR bump until I was ready for the point of no return in ME3 but them’s the breaks.

The best thing about the Datapad app though is that it is completely unnecessary to Mass Effect 3. It exists as nothing more than a fun way to see events that you’ve already experienced in the game. I know that seems like an odd thing to compliment the game on, but with the way that all of these companion experiences have been designed, I think it’s warranted.