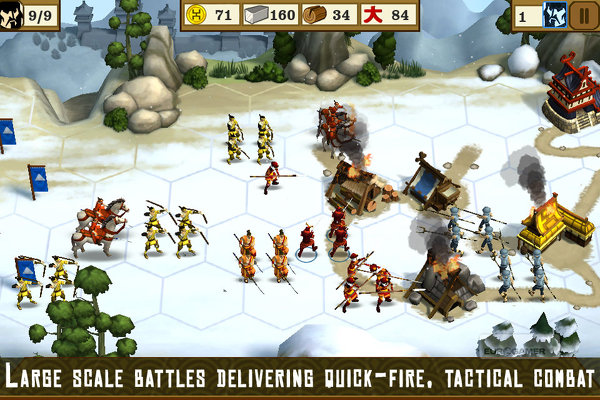 Sega and The Creative Assembly released some info and screenshots for the upcoming iOS version of Shogun Total War dubbed Total War Battles: Shogun. (Confused?) This entire idea sounds a bit ludicrous but I said the same thing about Snuggie and look how that turned out. In fact, the screens look pretty good and this sounds, on paper, like a neat implementation.It supports 2-player multiplayer on the same tablet and also packs a full 10 hour campaign mode as well. Being a sucker for Shogun Total War I’m going to have to check this out.

PR time and screens ahead:

SEGA of America Inc. and SEGA Europe Ltd. announced that The Creative Assembly one of the largest and fastest-growing development studios in Europe, is expanding even further to explore new platforms in the mobile sphere. The new Total War Digital team is tasked with creating compelling new gaming experiences for handheld devices using the Unity development platform, and bringing the award-winning Total War series to an even wider audience.

“Total War Battles is a distinct new direction,” said Rob Bartholomew, Brand Director at The Creative Assembly. “For the last 12 months our Digital team has been extensively prototyping technology and making sense of exactly what a Total War game on mobile would look and feel like.”

Renaud Charpentier, the Lead Designer on the new Total War Digital team, said “This isn’t the traditional Total War you might expect. We are working on a title that is specifically tailored to the play styles and control methods of mobile platforms. We want to deliver a game that plays to the strengths of handheld RTS mechanics, and perfectly adapts to a host of different platforms. We’re developing in Unity to help us achieve stunning visuals, gameplay and audio on all our target devices.”

David Helgason, CEO of Unity Technologies said, “We are incredibly excited to have a great development house such as The Creative Assembly working on Unity. Author once, deploy anywhere is Unity’s mission statement and it’s fantastic to deliver that to such an acclaimed and loved brand.”