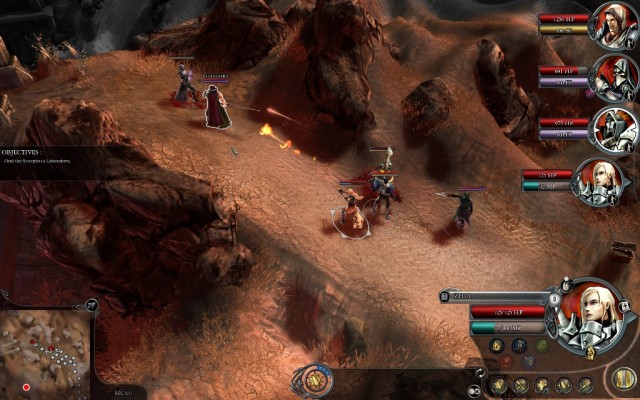 French developer Cyanide Studio continues to snatch up fantasy licenses. Blood Bowl, two games based on A Game of Thrones, and now the company is readying the release Confrontation, a lesser known license in the United States based on the tabletop fantasy miniatures game from Rackham.

I’m a diehard Blood Bowl fan and know The Song of Ice and Fire fairly well (I’m through three books) but I admit I know next to nothing about Confrontation other than what I’ve read and what Barnes has told me. So I come into this one with no personal baggage. This baggage caused me to look at Blood Bowl with a terribly critical eye simply because I know that game so well. That and the fact that the single player AI was abysmal; baggage or no baggage Cyanide never did figure out how to get the Blood Bowl AI to work and it ended up ruining the game if you didn’t want to focus on the multiplayer options.

This is my problem with Cyanide. It appears to be an outfit filled with good intentions and the company is clearly littered with hobby game fans. I’d like to hang out with these people and talk games.

Thing is, as much as Cyanide is focusing on genres and licenses that I like, this has yet to translate into a great game. Still, Cyanide has a lot of brands in the fire with Confrontation, A Game of Thrones role-playing game, and another upcoming role-playing game called Of Orcs and Men. The company is staying busy if nothing else. I was supplied a preview build for Confrontation (PC), which showed a couple of missions in order to get a feel for what the game is all about.

In the campaign you play the Griffin Faction. That means absolutely nothing to me but after doing a little reading these guys sound like human religious fanatics. Other factions in the game include the Scorpion (evil guys), The Wolf (werewolf –like creatures that use weapons and cast spells), and The Jackal (orcs, basically). These are generalities but I think that’s the basic idea. The campaign places you in the role of heroes of the Griffin army and it starts out with you going behind enemy lines to take the war to the Scorpion.

Mechanically, this is reminiscent of Dawn of War II albeit with lower production values and significantly fewer Space Marines. Cyanide simply doesn’t have the resources of a THQ/Relic. The animations are a bit stiff and the overall presentation a tick on the drab side. The voice acting doesn’t help.

Quick tangent: did you ever play the old tactical RTS Myth from Bungie? Yes, Bungie — before they went all Halo on everyone. Remember how awesome both the in-mission sounds were (‘Make a hole!’) and the voice actor who told the story in between missions? It actually enhanced the entire experience. Why can’t more games do that?

Anyway, there are some pathfinding issues that need worked out and it played a bit like unfinished code so it’s a bit unfair to dig too deeply into specific criticisms at this point. The preview was meant to provide an overview of the mechanics. 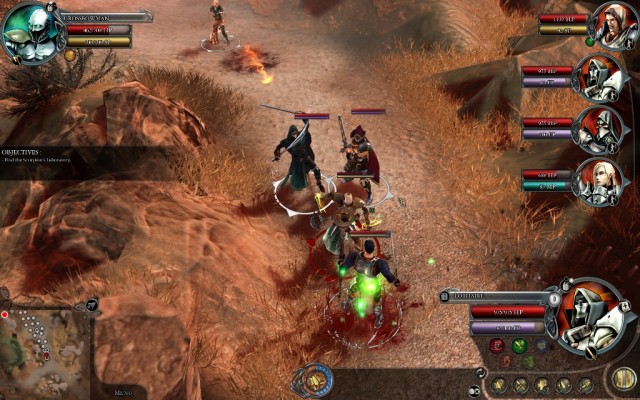 Like Dawn of War II this is a real-time tactical strategy/rpg hybrid with the option to pause and issue commands by pressing the spacebar. This is important as each character has a skill path with various abilities that need to be activated. From area effect “spells” that continually increase hit points to targeted spells that do direct damage to enemies, there’s a lot of buttons to press and a lot of triggers to activate and being able to pause the action is something I took great advantage of through my time with the preview build. The fighting is tactical enough so that if you simply lasso your heroes and send them into the fray they’re going to get roughed up. You need to use your skills and abilities (all of which come complete with cooldowns so you can’t just spam them.)

After a brief into to how it works, I had four Griffin heroes under my command which all follow basic archetypes: a tank, a ranged DPS, healer/buff guy and so on. Each hero had a clear role to perform – the fire mage was dead meat if she engaged in hand to hand fighting but was aces when asked to stand back and either shoot fireballs or fire-bind enemies, immobilizing them while the melee fighter went to work.

Also like Dawn of War II the preview build missions were designed so that I simply went from set piece to set piece, fighting bad guys as they waited on me to arrive. I’m hoping the campaign missions mix things up a bit because as much as I enjoyed DoW2, the “lead by the nose” mission design grew stale after a while. I’m hoping that Confrontation will allow for a bit more tactical creativity down the road.

Your heroes are customizable—to a point. You’re able to assign attribute points when leveling up (strength, intelligence, etc.) but the skills appear to be automated depending on your archetype. I didn’t see a specific skill tree, per say, I was just assigned a new skill when I reached a certain level. I’m hoping these skills branch out after a while but we’ll have to see how the final build looks. You do have options when upgrading weapons and armor, however. You earn armor and weapon “points” which can then be assigned to various trees – I had a choice when upgrading armor to boost physical or magical protection, for example. The game eschews the paper doll model.

The preview build was brief – only a little over an hour’s worth of campaign time (multiplayer support was not available in the beta), but I do want to see more. If the campaign missions stay in the comfort zone of “go here, fight small band of bad guys” and then “go here, fight new small band of bad guys” it’s going to grow tiresome, but I’m hoping Cyanide spices this up a bit as the campaign continues.

2 thoughts to “Confrontation Hands on Preview”