Last night I played through thatgamecompany’s Journey, now available on PSN. I played it from start to finish, which took about two hours. It may be two of the most important hours of video gaming I’ve ever done. I don’t know that I’ve ever sat through the end credits of a game feeling as if what I had just played was as much inside me as it was on the screen, and that something had changed in myself and also in the video game ether. I do know that I don’t think I’ve ever played a video game as eloquent in expressing an abstract concept of humanity and the rich fabric of emotion, experience, and relationships that define us.

Journey is both a critical dream come true and the game writer’s worst nightmare. It’s exactly the kind of argument for “games can be art” that I’m always looking for, a sophisticated and transcendental usage of video game grammar, metaphor, and structure rather unlike anything else before it. But it’s also hard to discuss without veering into the kind of soft-headed, doe-eyed hyperbole that undermines rigid analysis. And then there’s the issue of how magnificently subjective the entire experience of playing the game is. I’ve read several reviews, and although all have given the game high praise, most feel futile in the wake of this game’s passing. I’m sure mine will too.

How do you write about a game that is more about meditation, introspection, and self-discovery than shooting the core or saving the world? How do you quantify a game that describes- with stunning minimalism- concepts like the development of language and the ascension of matter into spirit? Why do terms like “replayability” and “linearity” matter at all in a game that touches on love, loss, elation, discovery, curiosity, creativity, fear, compassion, competition, loss of faith, loneliness, courage, and death?

The usual game criticism vocabulary falls apart. The grammar fails. Because this game, although it is a video game, is something else.

There is a story. You control a nameless pilgrim travelling across a desert to reach a pillar of light emanating from a mountain. That’s really all you need to know, and arguably it’s all you should know. In case you’re worried, there is a jump button. 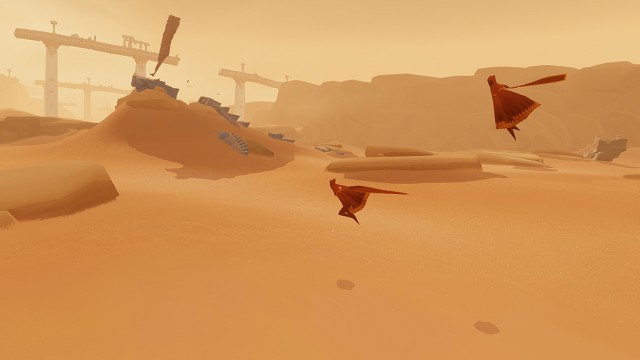 There is also a button for speaking. Or singing. Or laughing. Or screaming. It’s your choice. The reason it’s there is because eventually, you will come across another pilgrim that will accompany you. It’s another player, although you don’t know who they really are. And you can’t speak to them except through this one button and what you do in the game.

On my journey, I went through an amazing range of emotions, many tied to my companion. When he (or she) would be away, I would feel sad and look for them, pressing the button to see if they’d respond. When they did, it was a huge relief. We worked on some of the game’s cryptic, simple puzzles together. We celebrated when we made it through an area. We laughed as we slid through the desert through crumbling gates left behind by unknown builders. We hid together from a giant dragon made of cloth.

But his scarf was longer than mine, and I wasn’t quite sure why. I wanted mine to be like his. When we were close, we replenished each other’s energy. I can’t help but think that maybe the other felt like they were taking care of me, sharing his wealth, knowledge, experience, and energy.

Eventually, at the very end, I lost my companion during a dizzyingly ecstatic sequence that’s best left for you to discover. Walking into the final section of the game, I was alone. I felt guilty about going on without my companion. Was I so caught up in my ecstasy that I neglected the person who walked with me all of this time? I stood on a cliff, pressing that button to see if they would answer back. They didn’t. I moved on.

That a video game- particularly an extremely simple, abstract, and threadbare design- is able to evidence such meaningful emotion and such internal dialogue is astonishing. This is not about facile, immature emotional beats like the death of Aeris or a Call of Duty nuke. These are instances of almost complete emotional surrender and reflection that resonate deep within the soul, catalyzed by a very, very special video game that absolutely deserves the praise it’s receiving.

The few complaints that are out there- too short, too linear, too simple, too expensive- are pointless bleatings from people who may be expecting the wrong things out of Journey. In my opinion, they’re not expecting enough. Because this game is one of the few that can totally deliver on the premise of games as art and the potential of the medium to reach far beyond pulp narratives and macho, blockbuster posturing. It’s like a masterpiece in a gallery full of teenage notebook art. 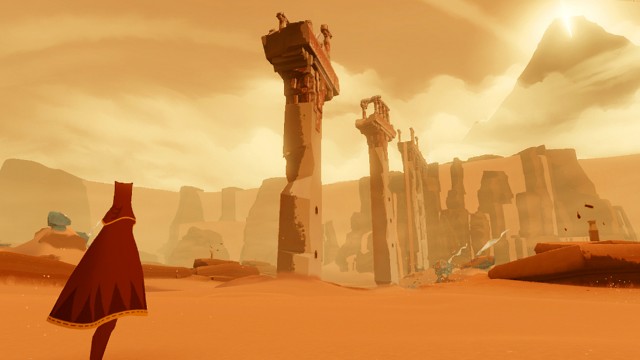 But there is one tremendous variable in this game’s success or failure as a work. You. What you bring into this game, what you expect it to do as a video game, and how you receive its cues will determine what it means for you- if it means anything at all. Some will not like it, citing a dearth of gameplay or choices. But there is a game here, complete with trophies, secrets, challenges, and even fail states. Others will call it pretentious or boring. They’d be dead wrong.

Journey is an important game to me because it validates almost everything I’ve ever believed about video games as a creative medium. But more than that, for two hours of my life I don’t know that I’ve ever felt so emotionally and spiritually connected to a game. It’s demanding, in a way. I felt exhausted afterwards. When it was over I had intended to play a few levels of Sine Mora for the review next week, but instead I just went to bed and thought about what I had just experienced. It haunts me today, and I think it may very well haunt me forever.

I’m asking myself repeatedly if I’ll ever play it again. I don’t know. The first time was so powerful that I’m afraid of hyper-analyzing its mysteries and internal logic too much. But I want to see what happens with another companion. I want to feel that sense of discovering another on the same quest that I’m pursuing. Maybe I can take on the role of a mentor or guide for a player that hasn’t been through the game yet. Maybe my scarf will be the longer one between us.

45 thoughts to “Journey in Review”