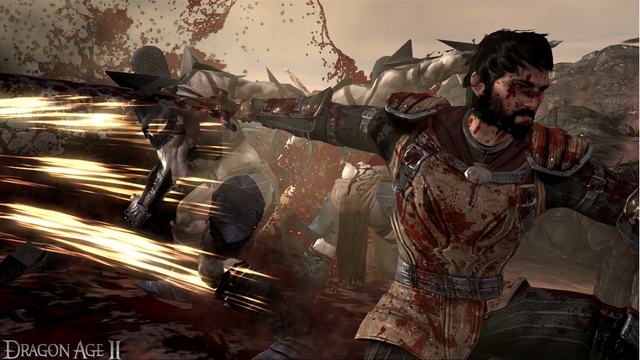 Ah, Dragon Age, the series that we here at NHS love to hate and hate to love.

Dragon Age was a modern return to an older school of BioWare design. We all loved it.

Barnes loved it. Truly loved it. I still have no idea why. Todd and Brandon both were lukewarm but for different reasons.

I despised it — to the point where after reaching roughly the halfway point I was done with it forever. I cannot remember the last BioWare game that, even if I wasn’t loving it, I had no desire to finish it. (The Star Wars MMO doesn’t count.) Dragon Age II was that game. Even today it remains a terribly polarizing title.

Mark Darrah, Executive Producer of Dragon Age II, posted this on the BioWare forum about the future of the series (well, sort of) and while the post I found somewhat bland the responses to it on the forum were fascinating.

With last week marking the one year anniversary of the release of Dragon Age II, I wanted to take the time to share some news and some great milestones we’ve had lately with Dragon Age. And though I can’t say too much, I also want to briefly address what is coming in the future.

First, I was delighted to hear that the Dragon Age brand has passed one million “Likes” on Facebook! This was an incredible reminder for me, and our entire team, that there are a lot of you out there who are invested in the franchise and who want to explore the world more. From all of us, I want to send a massive thank you!

Next, the latest and greatest patch for DAII is out, addressing a number of the issues you have helped us track on our tech support forums. Thank you again to those of you who took the time to submit feedback in order to help us make the game better.

And finally, while we will still be keeping an eye out for any issues that might crop up in DAII and supporting the community should any emergencies should arise, we’re moving the entire team’s focus to the next phase of Dragon Age’s future.

You’ve most certainly heard the rumors floating around, and unfortunately I can’t really comment on them. However, what I can say is that we’ve been thinking a lot about Dragon Age – what it means, and where it could go. This past year, we’ve spent a lot of time both going back to the “BioWare vault” of games and re-examining them, and looking at some new possibilities that today’s industry allows.

With that, the next thing for the Dragon Age team members and I to do is hear from you, and not just on the forums, or Facebook, or Twitter. We’ll be attending a number of conventions and gatherings, including PAX East in April. The most valuable thing we can get out of those meetings is to hear from you on those same topics – what does Dragon Age mean to you, and where would you like to see it go? We’re excited to hear what you have to say!

On behalf of the entire team, we are incredibly eager to reach the moment when we can tell you more and show you where we are taking Dragon Age. But for now, thank you for your continued support, and we will be back here with more as soon as we can.

That’s a fairly nondescript way of saying: We’re done with DA2 DLC and we’re move on to Dragon Age III. Scan the replies of that post and you see a lot of people thrilled with how the sequel turned out and a lot of others who say things like this:

If you want to know where to take the series, it’s simple: Do another Dragon Age: Origins. Pretend Dragon Age II never happened. All else aside, the sales figures make this perfectly clear.

What I find amazing about the replies to that post is that people who seemingly hate Dragon Age 2 are still posting on the Dragon Age forum a year after the release of the game. There are things that people do on the internet that I will never, ever understand.

Dragon Age III (or whatever it’s called) is going to be an extremely important release for BioWare at least so far as fantasy rpgs are concerned. I hope they can get the series back on track and far away from whatever they were trying to do with DA2.

There will be sex.

And there will be blood.

45 thoughts to “The Future of Dragon Age”