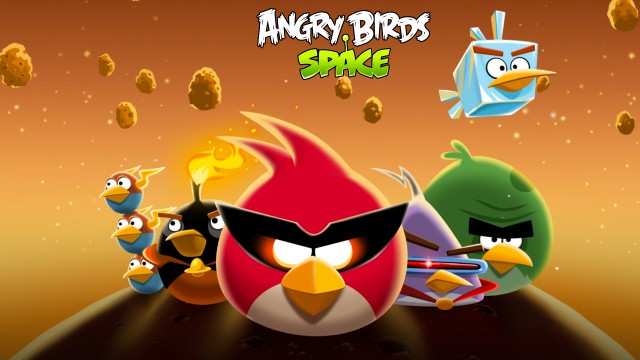 I don’t talk very much about my love of the Angry Birds around here, but hey, it’s Friday. Let’s do some confessing.

When I bought my HTC EVO last year, the thing I was most excited to do with it was play Angry Birds. By that time, everyone and their mother seemed to be playing the game and I wanted in on the action. Most of the time, I ignore mobile phone games due to the fact that they’re too simple, too interested in getting me to buy gems or stars or star-gems, or they involve spamming my friends with requests to by garbage cans or Werewolf spray or whatever. Note that I said “mobile phone” and not “mobile” as I don’t want to disparage my beloved iPad.

Angry Birds was different, though. It was simple yet it ramped up to fiendish levels of difficulty very quickly. It had a great sense of humor and an increasing stable of birds that allowed them to tweak the levels to increase the challenge without seeming cheap. Many the stages did I clear with three stars, often times repeating the same efforts on my wife’s phone.

So I played a ton of Angry Birds. When Angry Birds Seasons came out, I played a ton of it, going so far as to spend every working moment of the time between Christmas of 2010 and New Year’s of 2011 three starring all of the Halloween levels. I’m not going to say I was unproductive those days, but well, let’s just say it was good that nothing was expected of me. When Rio came out, I played it for like, one level, but I hear my daughter liked it more because it was easier. I wouldn’t know as I rarely let my kids touch my stuff on account of me being a horrible, selfish father.

Eventually though, flinging pigs lost it’s allure. It’s not that the game got bad, it just got vast and I was ready to move on to something else. Thankfully, Rovio was too and their move from the surly bonds of Earth to the glorious vastness of space was just enough to get me back into the pork destroying business. 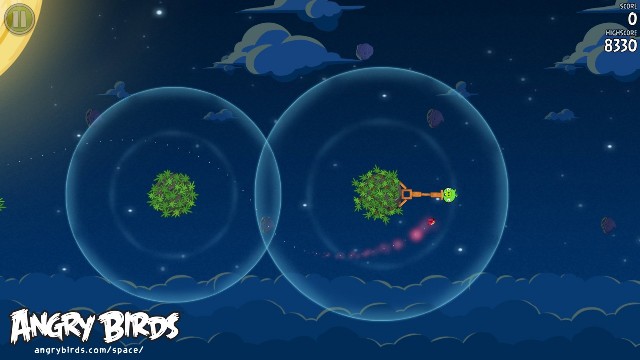 Don’t get me wrong, you’re still flinging birds at pigs in Angry Birds Space, but as that’s the core gameplay element, that’s to be expected. If you boil it down, in Gears of War 3, you’re still shooting dudes from cover, but you’re supposed to. That’s kind of the point. Here, the point is to destroy pigs in a flurry of feathered destruction.

On the face of things, moving to space doesn’t seem like that much of a big deal, and at first, as you’re lobbing birds into the gravitational fields of planetoids and using said gravity to curve the arc of your bird, it doesn’t seem much different. It’s when gravity isn’t there that you notice. What, I can’t dive bomb birds any more? No sir, you can’t. In space, not only is there no one to hear you scream, but there’s nothing to keep you from moving in a straight line for all of eternity. After taking gravity for granted for so long, its absence is sorely felt. 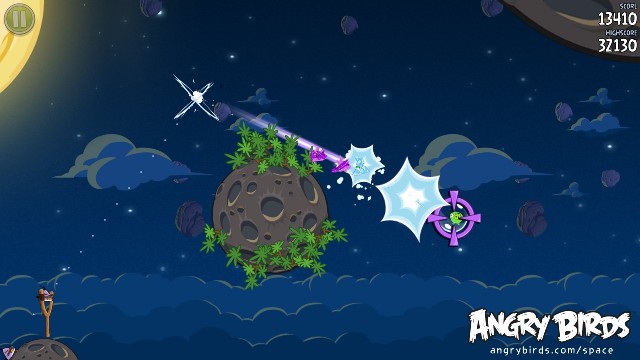 Before long though, you start seeing gravity as a tool in your arsenal, same as your birds and the geometry of the level. Strategically placed planetoids may offer what appears to be shelter for those dirty pigs, but the gravity surrounding those planetoids can be used to sling shot birds, or suck in debris, spelling porcine doom in the process. The addition of an aiming arc is a godsend, as is playing the game on the iPad’s huge screen, even if I have to pay three bucks for the privilege.

The same basic advancement structure is in place, meaning that a one star score is enough to progress, but those extra two stars will mock you mercilessly until you claim them. The mighty eagle returns, this time in the form of a black hole dropping ornithological avenger. Occasionally as you work toward exterminating pigs, a golden egg will catch your eye. Destroying it will suck you into an alternate level based on classic video games such as Mario Bros and Space Invaders. It’s a nice touch, and gives the level designers something extra to play with. 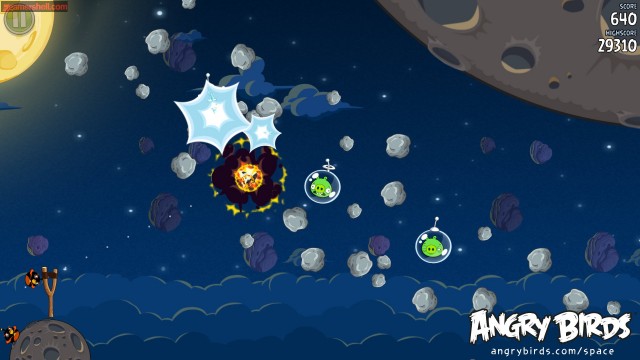 Pricing on this one is all over the place, with the iPhone version going for 99 cents, the iPad HD version going for $2.99 with no sharing between the two, a free, ad supported Android version, a 99 cent Android version and probably something else that I’m missing. At least on the iPad version there’s an extra set of levels that can be purchased for another buck or two, but based on Rovio’s track record of releasing more levels for these games faster than I can three star them, I’m confident that I can leave those extra levels unpurchased and never miss them.

A lot has been said in the past year regarding Angry Birds and what it means for traditional video games, much of which is outright hyperbole, and as much as I disagree with Rovio on that particular subject, these people are squarely in the know when it comes to the business of making bird flinging games. Moving to space is just the shot in the wing this game needed and I’m happy to be along for the ride.