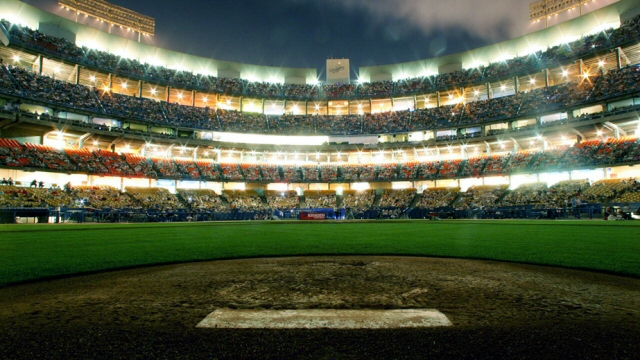 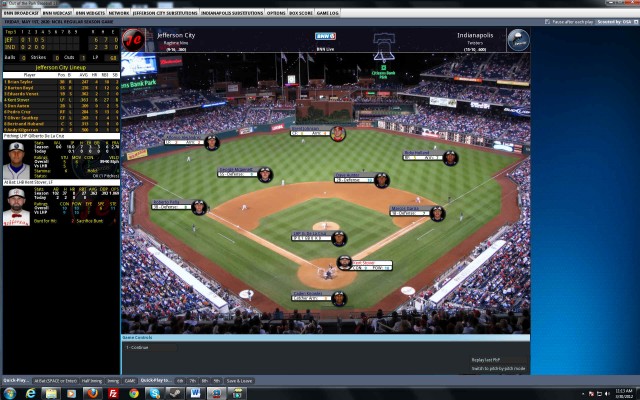 When I sit back and think about it, I have probably spent more time over the years playing Out of the Park Baseball than any other game. That might sound odd, and honestly it surprises me, too – the fact that I have spent so much time playing a text based statistical spreadsheet baseball game more than any other piece of software.

I got hooked on OOTP years ago with the release of version 4. Since then I have organized and played the “commissioner” role in a couple of online leagues, the most recent started with the release of OOTP 10 and has continued through versions 11 and 12. We have played over a decade’s worth of baseball in our league, forming our own rivalries, dynasties, cellar dwellers, player and owner personalities, and creating our own sense of baseball history. It’s fascinating stuff.

I spend nearly every single day, in some capacity, playing OOTP. That can be either simulating a week’s worth of games, talking to other owners about trades, tweaking my own team’s lineup or pitching rotation, scouting the free agent pool for overlooked youngsters, or just chatting with other owners over Google Chat.

Some days I will spend 15 minutes with the game, on other days I’ll spend over an hour. Fact is, I know OOTP like my old, oiled up baseball glove and I still contend that in this sort of format OOTP takes games like The Show and MLB 2K and whacks them on the noggin’ like a Goose Gossage fastball.

But OOTP is also starting to suffer a bit from what big name publishers deal with: namely, justifying a yearly purchase of a new game that is essentially a modest upgrade over what they already own; there’s also the issue that most OOTP releases don’t hit their stride until months after release when the patches are issued and the kinks are ironed out.

My online league owners, for example, are pretty much split on whether to switch to OOTP 13 when it drops in April. In fact, I’m almost certain that we won’t switch until we’re all sure the game works as intended and is really ready for league play. We switched to OOTP 12 almost immediately after release and that didn’t go over too well. So we’re going to play the waiting game this time. 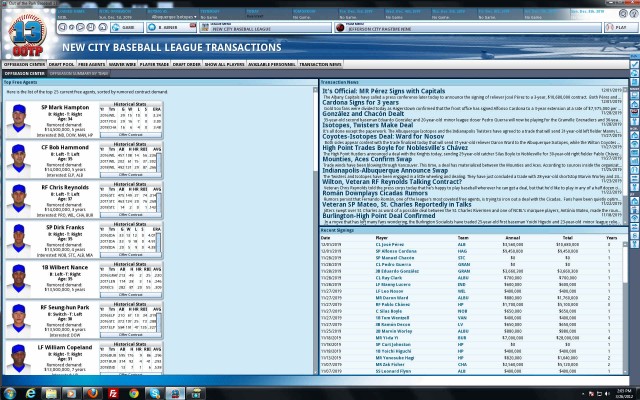 My hope is that there are no immediate issues when OOTP 13 drops next month as I have been playing a beta of the new game and I like a lot of what developer Markus Heinsohn has done with this version – even if most of the initial features are more focused on solo leagues rather than online play. That said, I converted our OOTP 12 online league into OOTP 13 without a hitch; a good sign to be sure.

The first thing I noticed, obviously, was the new interface. OOTP changes interfaces like I change shirts. However, this time the UI seems more functional and design savvy than in the past. I have grown so accustomed to the game’s UI that I tend to overlook its issues. Show the UI of OOTP 12 to a new player and they cringe in fear – and I’m talking about game developers who have an idea about how to design an interface. It can be an unwieldy beast.

Version 13 makes some simple yet effective changes to the interface, even small things like combining the potential player ratings and the current ratings into one screen. The interface is less cluttered looks cleaner, and is easier to navigate. There are still menus and sub menus and reams of data that you have to sort through but at least it’s all easier to find now. There’s also a new team home page with a lot of great info packed into one easy to read screen.

One of the biggest additions to this year’s game is Real Time Sim mode. Currently this is just a solo play feature although online leagues should get a taste of this in a future update. The idea is that when you activate RTS mode you see the day’s games play out on one screen in real time. As painful as that may sound (baseball is a somewhat measured pace sport) you can increase the game speed up to 300x to get things moving. The thinking here is that you can see important games play out in front of you, which adds a level of tension when an important game in Boston takes place the same time as your game in Cleveland and you need Boston to lose to get a leg up in the race.

Is this something that many will use when it’s the middle of July and their team is 12 games out of first? Not likely. However, the final week of the season when you are battling for a playoff spot – RTS mode can add a ton of drama to a race. It may not be something I use every week but it’s a welcome addition nonetheless. I really hope this gets added for online play as we’ll certainly use it.

Trade AI has always been a sticking point with a lot of OOTP solo players and 13 is trying to make one-sided deals a lot more difficult to pull off. Trade AI has been an issue in every sports game ever made and so far version 13 looks to do a pretty good job of making your life as GM a little tougher. Even one for one deals are tough. CPU GMs want stuff in return, imagine that.

I am, however, still concerned with some of the AI front office moves. After converting our league over to the new version and turning every team to AI control, I saw a lot of BIG name players in our league turn into free agents rather than be re-signed by teams with ample funds and a reputation for winning. Sure, that can happen in real life (Albert Pujols) but I saw a lot of 4 and 5 star free agents available which was a bit of a surprise. Maybe those players simply wanted to be frees agents? Certainly possible. Maybe I was just upset to see great players on my own team leave for pastures that couldn’t possibly be as green – we breed champions in Jefferson City, damn it.

There are other tweaks to the OOTP formula that might sound small but in fact are huge to those who play regularly.

Player generation is vastly improved both for the rookie draft as well as general player creation. In the past OOTP would generate some players that could only exist in a videogame. Specifically players who could run like Hayes, hit like Mays, but had no “Gap Power” so you’d see guys with blazing speed, vicious home run power, and a lack of Gap Power so they’d hit 10 doubles a year, steal 50 bases and hit 40 homers. Those players simply do not exist in the real world and now they do not exist in OOTP. 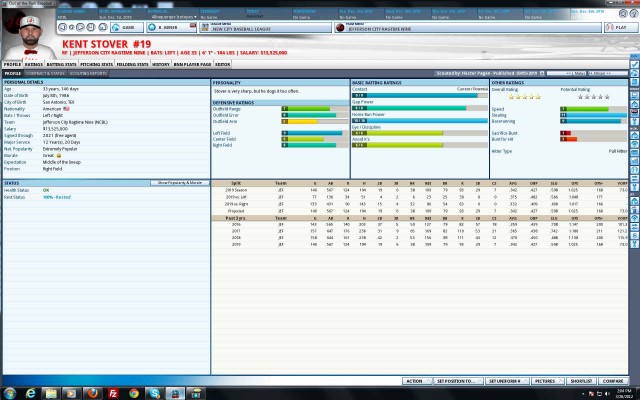 The rookie draft is no longer plagued with an overabundance of Middle Relief pitchers, much to the delight of everyone in my league. Now most pitchers enter as Starting Pitchers, and you’ll have to decide where they belong. In addition, in the rookie drafts that I saw when testing version 13 there are more highly rated players which leads to more early round busts, something with which OOTP has always struggled. In our 2020 draft, for example, my scout saw 64 players rated at least 3 out of 5 stars. That was unheard of in the old games as by the end of the first round we’d all be drafting 2 star projects.

New CBA rules are in place which allow for additional playoff structures and the removal of certain types of Type A/B free agents. A small addition, sure, but one that is welcome nevertheless.

The new storyline feature is worth mentioning as in the old games the storylines were sort of goofy. “John Smith hurt his hand mowing the lawn” and stuff like that. Cute, but pointless. The idea was to add some flavor to a league, which was nice and all but it had very little actual impact – an injured player is an injured player. Now, the storylines are interactive. John Smith is now a team cancer, throwing water coolers around in the dugout and calling teammates out for making errors and generally acting like a jackass.

Now OOTP asks: what do you DO with John Smith? Ignore him? Fine him? Suspend him? Trade him? This adds actual gameplay to the storyline idea and gives players more personality in the process which is something that is overdue; it asks you to make tougher decisions that may not be solely baseball stat related.

Finally, something I have always wanted to see in a baseball game is the Random Historical Player Debut feature . I love old time baseball, and just like in earlier versions you can play OOTP as an historical sim, importing any year in baseball history and starting from there. That’s nothing new. However, having Ty Cobb randomly show up in your league in 1975? Sign me up for that. You can even use these players in other league formats. I love, love this idea.

There’s actually a lot of new stuff in OOTP 13 and much of it a tweak here or a fine tune there. The big question, and what really is the essential question, is how will the release go? If OOTP 13 ships without a hitch and only a smattering of issues pop up then both solo players and online league owners should jump at it. It’s clearly a better game than version 12. If not, it’s going to be best to wait until it’s humming along as intended.

So far so good…

9 thoughts to “Out of the Park Baseball 13 Preview”