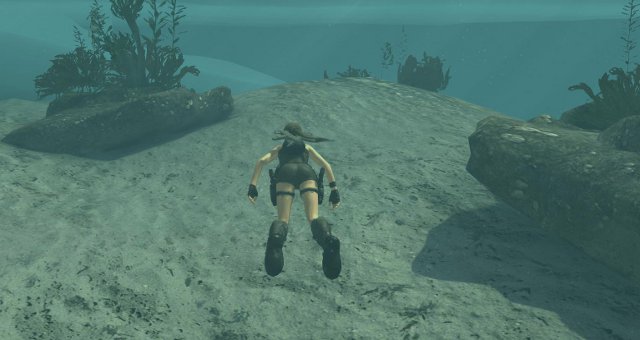 When Tomb Raider came out, it seemed as though wherever I went, I’d find friends playing Tomb Raider. People even used to play it in little groups, gathering round the screen to discuss plans of action and taking turns trying to execute particularly difficult jumps. This perplexed me, because I hated Tomb Raider with every fibre of my being.

What, may I ask, is the point of playing a game which largely seems to involve hurling yourself at blank walls and desperately stabbing at buttons in the hope that there’s going to be a handhold to grab on to? In a nutshell, the problem I had with Tomb Raider is that it encouraged you to experiment with the game environment but gave you very few clues as to how you should shape that interaction in order to progress. I’ve always loathed that aspect of game design – it seems supremely lazy to me and hateful to play through. It made it’s first appearance in early adventure and interactive fiction games where the “puzzles” seemed to consist of you just trying different inventory objects in different locales until one worked, with precious little rhyme or reason as to what combined properly with what to achieve the desired effect. It was bad enough in adventure games which at least gave you time to stop and think. But Tomb Raider was the first time I ever saw this gameplay technique in an action game. And boy, did it suck big time.

Since first playing Tomb Raider, I have discovered this in a variety of other titles. In one instance I had to keep replying a section of Brothers in Arms because I needed to find a tiny hidden spiral staircase in order to progress. In another I discovered that to complete a critical mission in Knight of the Old Republic you had first to talk to a completely unconnected character in the planet. In all of these cases the problem is not that you have to discover something in order to progress, but the fact that little or no clue is offered to the player as to what that something is, or how to go about fixing it.

The worst offender that I actually slogged through myself is probably Silent Hill 2 which features several instances in which the protagonist must search the town for a hidden item with little or no clue where it actually is whilst having to endure a gauntlet of horrible, endlessly spawning monsters, without the benefit of save points or endlessly spawning ammunition. It’s a testament to how good the rest of the game is that I put up with these instances of awful, lazy, tedious, repetitive design but they’ve burned themselves on my memory with hideous clarity and put me off playing future iterations of the franchise. I suspect fairly strongly that the lack of this sort of daft game play is a key reason why Resident Evil caught the imagination of gamers in a way that Silent Hill did not, in spite of its superior scripting and atmosphere.

There are parallels in board games too, albeit fairly loose ones. In a lot of European style games where the theme has little relevance to the rules or play of the game, I often find myself struggling to understand how, exactly I’m supposed to leverage the mechanics of the game in order to progress. When I finally get to grips with it, sometimes the game underneath is good and fun, but I never have that sort of struggle in games with strong themes, where you can usually use some sort of real-life experience to guide you. If a game involves negotiation, everyone knows how to that to some degree. If it involves moving armies across a map, even a pacifist can relate to the basic concept. If it has an element of trading then we instinctively appreciate how the values of different things relate to one another. But in something like Stone Age which features prehistoric people smithing metal, taking turns to have sex in a specialist “love hut” and apparently gold-plating their mud-walled dwellings, how on earth is the novice player supposed to get a handle on what the hell is going on? This disconnection is the number one reason I’ve found for casual players being turned off supposedly simple, supposedly family friendly European games. It matters not a jot how simple the rules are if the mechanics make no sense to the players.

I was reminded of this when reading through this fantastic essay on game design by veteran RPG author Greg Costikyan of Paranoia fame. Greg says “If you don’t tell the player… what good is it? It won’t affect the player’s behavior; it won’t affect his decisions” and as I pondered the truth of that observation, the memories of all those dull hours of fruitless searching, of watching my friends repeatedly fling Lara Croft at blank walls, came rushing back to me. And I wondered how on earth it was that something that seems so obviously flawed to me, backed up by an observation from a highly respected designer, ever became a central tenet of a certain genre of game?