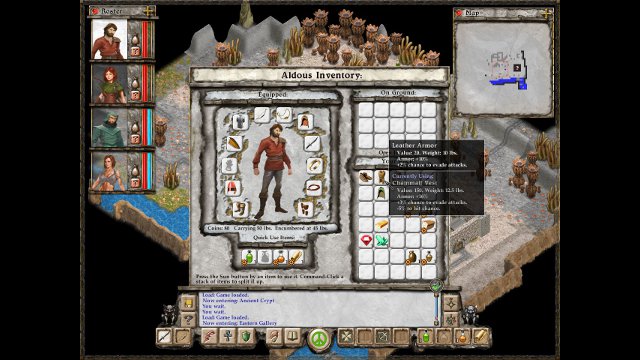 Avernum: Escape from the Pit was released for the iPad last week, coinciding with my vacation, the same as when Avadon: The Black Fortress was released last year. Both are isometric, turn based RPGs from Spiderweb Software. They both share a lot of similarities in terms of battle mechanics and inventory management and such. At ten bucks, both are incredible values with tons of replayability.

For all they share though, in my mind, Avernum is the better game and here’s why. 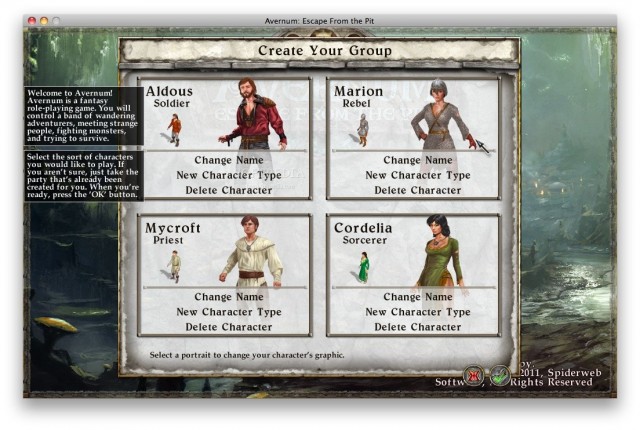 If Avadon was Baldur’s Gate, then Avernum is Icewind Dale. BioWare and Black Isle fans from back in the day should know what I’m talking about, but for those that didn’t rock the Infinity Engine games, what I mean is that where Avadon gave you the option of picking a character and then surrounding that character with a team of pre-made characters, all with their own back stories, Avernum allows you to create your whole party from scratch. There’s no back story other than what you put into it. You can go with the generic group, like I did, or make your own band of merry adventurers. Don’t get me wrong, I think there are probably more narrative opportunities when you can use the party members and their interactions to drive the story, but at the same time, I love rolling an entire party and coming up with their group dynamics in my head. Is this a group of all ex-soldiers who spoke out and were banished, or maybe it’s a tribe of hill people, barbarians, shamans and sorcerers that were sent to Avernum for not hewing to the Empire’s wishes. One of my favorite moments of my PC gaming days was creating an Icewind Dale party to mirror the characters in Buffy the Vampire Slayer and then bringing them through IWD and IWD2. Averum lets me relive that, albeit in a smaller form as you only have four party members.

READ ALSO:  Brakketology Is Out of Its Element 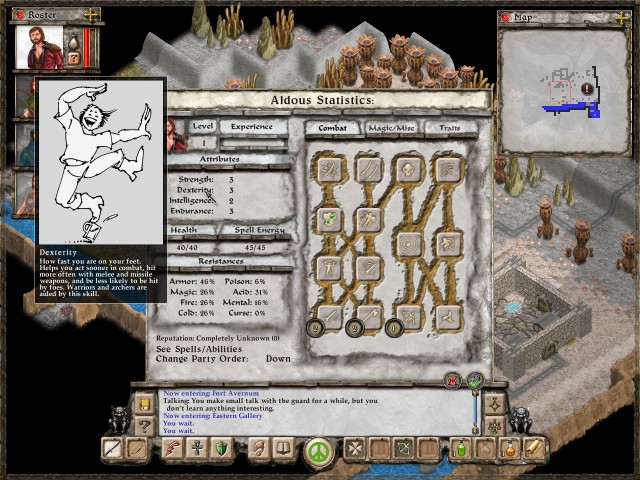 Avernum uses the same attribute and skill progression system as Avadon but they added traits into the mix. In some cases, skills from Avadon have been renamed as traits in Avernum, but in other cases, these are totally new character modifiers that open up new ways of tweaking your build as you increase skills. For example, placing multiple points in Mage Spells or Priest Spells opens up the Increased Intelligence trait or the Swordmage trait. Putting points in missile weapons or thrown weapons allows you to buff your dexterity. You get the idea. As character tweaking goes, it’s nothing revolutionary, but it allows for a little more character customization than the last game did, which goes nicely with the ability to create a team of whatever character classes you choose. 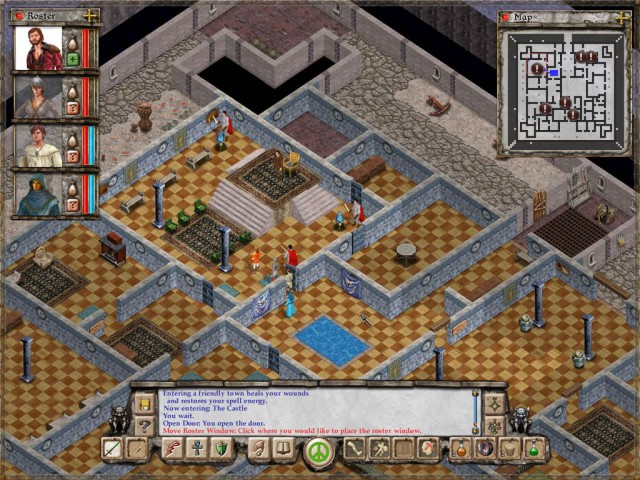 I may be remembering things incorrectly, but I feel like Avernum is harder than Avadon. Or, more specifically, Avernum requires you to think about things like attack order, character placement and how your party’s traits work together more than Avadon did. Very early on in Avernum I ran up against a band of beasties that I thought would be cake. Five minutes and one dead party later, I realized the error of my ways. As you progress deeper into the game, you run into difficult encounters nestled deep within manageable encounters, something that I find refreshing. When you open that door, you’re not sure if you’re going to face more cannon fodder goblins or an extremely pissed off ogre. Knowing the range of your abilities and how best to use them together is the key to surviving. 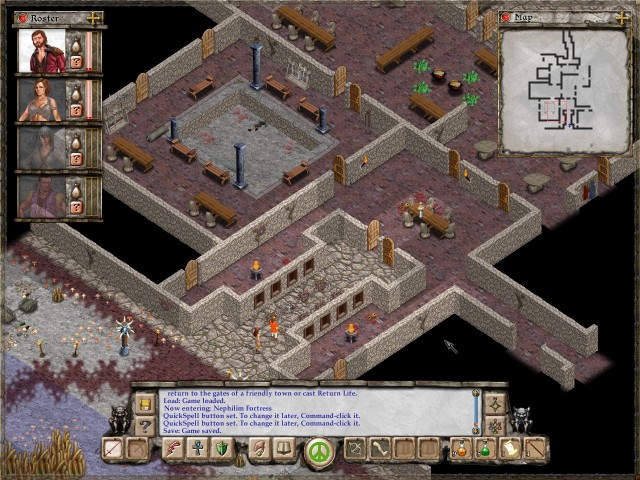 Sure, if things get tough, you can drop the difficulty level down, something I had to do a couple of times with Avadon, but if things get really, really tough, or you just want to dick around with your party, you can edit your characters in the included character editor. Holding true to its name, the character editor allows you to assign skill points, attribute points and traits to characters outside of the normal leveling up process. Sure, it can make you incredibly powerful, but that’s why you have to specifically unlock it and why the game warns you several times about how it can be very tempting to use and how it can unbalance your game. When I played Avadon, I tried to bring my character’s story to the logical conclusion by challenging Redbeard but my screwing up some loyalty quests earlier meant that I didn’t have the necessary number of allies. Had I been able to tweak my character, I could have knocked the ginger haired bastard on his ass just to see how it played out. Sure, I wouldn’t have truly “earned” it, but if it’s just to see how the story went down, who cares? 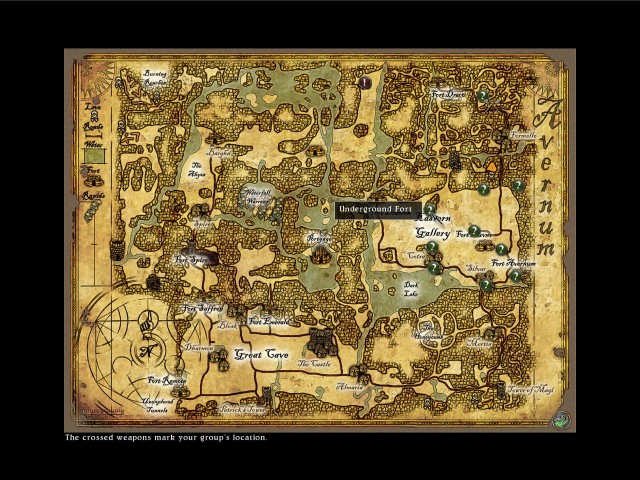 Avadon did not make turning in quests easy. Between the limited selection of character models which made it hard to tell this quest giving guy in a gray tunic from that anonymous worker bee in a gray tunic, and the lack of quest markers, turning in quests often turned into a chore as you scoured the map for Tom the butcher or whoever needed something done. Avernum fixes this, sort of, by adding markers for areas of interest in all of the cities and quest markers on the world map. Oh, it also gives you a world map. I won’t call the markers in the cities quest markers, as they don’t function as just quest markers. It may designate a shop or someone you can talk to, not just someone who gives you something to do. Also, if it is someone who is in need of help, the marker doesn’t disappear once the deed is done. The markers on the world map, however, are quest markers and make planning your perilous Avernum journeys all the easier.

Having played Avernum for a week, I’m enjoying it as much as I enjoyed Avadon, more so due to the reasons listed here. Don’t worry though, I’m not entirely pleased, because where would the fun in that be? Check back on Friday to read about how all is not well in the pits of Avernum. Well, beyond the suffering and torment that exists as a function of Avernum being a realm of eternal banishment for all crimes, great and small.

4 thoughts to “Five Ways Avernum is Better than Avadon”