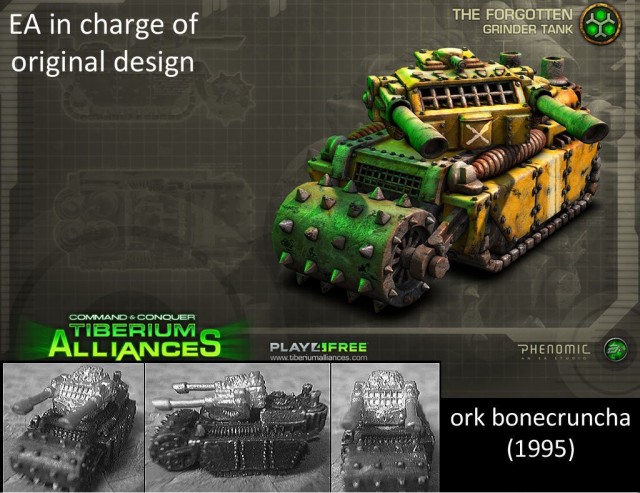 Games Workshop might be a monolithic empire that will sue the hell out of anyone who even mentions its games in public if it doesn’t get a cut, but you have to admit that a lot of GW properties have been, let’s say “borrowed”, without the company’s consent. Sure, GW can take this to the extreme, like when it freaked out when users started making custom content for the new edition of Space Hulk. Fan made mods and maps — Games Workshop lost its mind over that one. Games Workshop protects its IP like a mother wolf protects its pups. When Cyanide made the PC game Chaos League, which was a blatant lifting of the Blood Bowl idea, the lawyers were called.

StarCraft and WarCraft would not exist — at least in so far as how the games look — without Warhammer.

The latest “borrowing” comes from EA. Here’s the blurb from Eurogamer:

EA has been accused of copying Warhammer 40k tanks for its browser-based real-time strategy game Command & Conquer Tiberium Alliances. Users on Reddit noticed a number of tanks in C&C, developed by German studio Phenomic, are pretty much carbon copies of tanks in the famous Games Workshop tabletop game.

Whoops. Look at that picture. Might as well slap a Bad Moonz clan Ork on that sucker and call it a day.

Purge the Unclean…call the lawyers.

READ ALSO:  This is an Actual Press Release

10 thoughts to “EA Copying Warhammer? Shrug. Get in Line.”