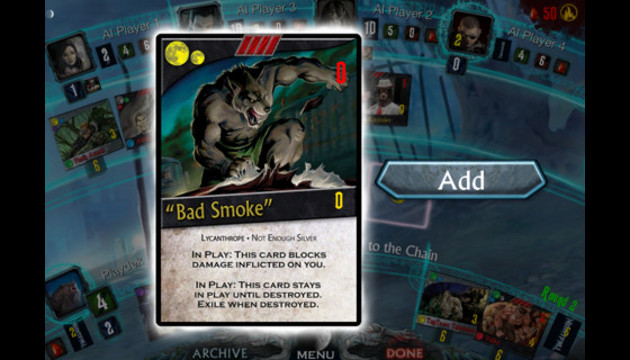 I loved Ascension. Many of you loved Ascension. A very large subset of those of you that loved Ascension, loved beating me at Ascension. There was a lot of love going on there for Ascension, although a little less on my side, what with all of the beatings. When Playdek announced that they were bringing an iOS version of Nightfall to the App Store, it was only natural to assume that my love would jump from Ascension to Nightfall like influenza jumps from the restroom door handle to your unsuspecting palm. 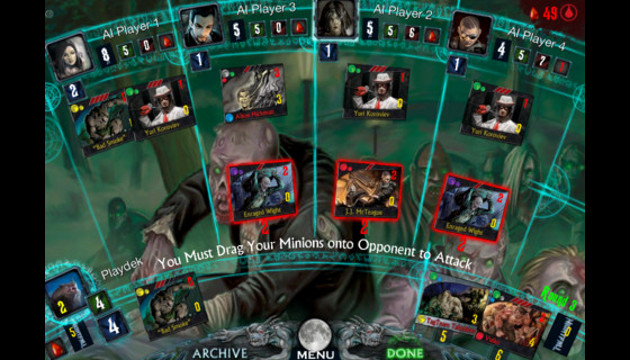 One of the best things about Ascension was how easy it was to pick up. For folks that are used to more hardcore board gaming fare, I can see the simplicity of the game being a turn off, or at least something that limits your time with the game. For me, someone who has very little board gaming experience, it was perfect. Within a few games I felt confident playing other people and I knew that it wasn’t going to be a complete waste of time. Sure, I’d probably lose, but at least I could learn things for the next match. Ascension made it easy to tell what was going on and what your next move was going to be and also easy enough to tell when you were well and truly screwed. My son watched me play a couple of games and learned enough from watching me play and from my explanation of the rules that he came up with his own version of the game, albeit one played through the lens of Calvinball.

There will be no Calvinball version of Nightfall as the rules of this game are a lot more complex and a lot harder to pick up from watching games play out than with Ascension. At least to me it is. Maybe more grizzled board gaming vets would scoff at that statement, but all I have is my own gaming baggage and for me, this game can be incredibly confusing. 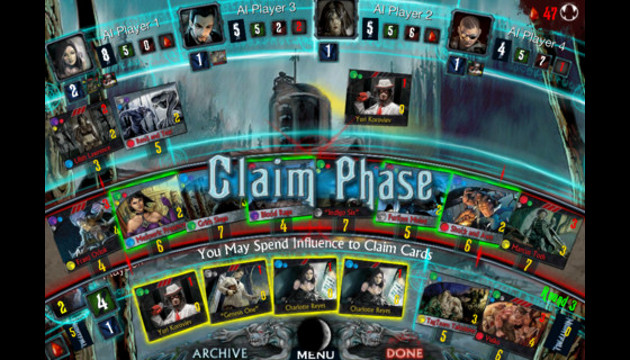 There’s a tutorial, as with Ascension, and it tries very, very hard to show you all about the game and get you into one as quickly as possible, but it feels a bit too quick. Imagine that you’re going to house-sit for someone and to prepare, you come over to the house so that they can give you the rundown. They then proceed to walk very quickly through the house, pointing everything out and occasionally allowing you to punch some buttons. Here’s how you set the alarm. Here’s how you watch TV. Here are the plants you need to water. So long, I’m out. Then, two days into your visit, you don’t know how to get ice from the fridge’s dispenser. Or, worse, you get ice but then the next morning the kitchen is flooded and the cat is trapped on the cabinets and you didn’t even know that there was a cat. I think that for people who have played the physical version of Nightfall, the iOS version would be great, but for new players, not having a physical representation of the rules to look at while playing is a big detriment.

It’s hard to weigh how much something like this should come into play when reviewing the game. The game isn’t doing anything wrong. It’s following the rules of the physical game and pretty well from what I can tell, having read the physical game’s rule book. It’s not the game’s fault if I can’t understand what’s going on due to a lack of familiarity with the game. The problem is that my lack of understanding makes me not want to play the game. Is that the game’s fault for not being clear enough, or is it my fault for being dense? I like playing against other people but I don’t feel like I have a good enough understanding to be competitive, which is why I haven’t been as proactive in finding games as I was with Ascension. Sure, the game could be clearer in the tutorial but I think that a certain amount of the problems exist between chair and iPad. 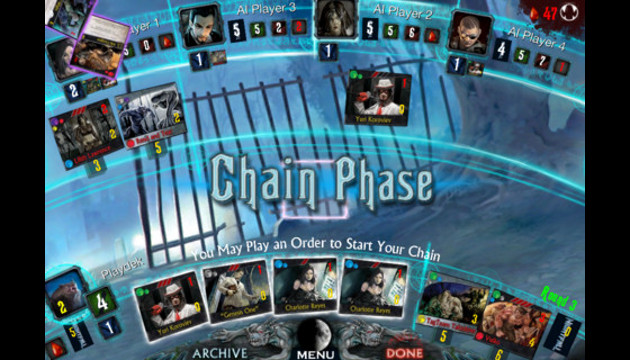 The thing that keeps me playing, though is that I really want to learn how to play this game because I think there’s a very good game here, one that’s just beyond my reach. As much as I loved the artwork of Ascension, I never really understood why I was warring against someone who was working towards the same goal that I was, namely the banishment of The Fallen. Seems silly for us to be beating the tar out of each other when demons roamed the world.

The world of Nightfall is much easier to understand and get behind conceptually. The world has gone to hell, vampires, werewolves and ghouls now rule and it’s up to you to defeat your opponent with your supernatural army. I get that. Of course vampires would fight werewolves. Their enmity towards each other is legendary. Also, there’s no third party enemy mucking things up. It’s just me and the opponents across the playing surface.

The game’s mechanics, a combination of chaining cards for effects, spending cards to get new, better cards, and using played cards to attack and defend against attacks is well managed and the card text and artwork all work well towards setting up the various conflicts. I know enough about the game’s ebb and flow to know that I like what I’m seeing, I just don’t always understand why some stuff happens when it does, or doesn’t when I think that it should. Playing multiplayer doesn’t help much in this regard as the game does an admirable job of splitting up the actions, but there are still times when chains are resolving with no action on my part, or the game stops for what seems like no reason. Again, I know that there is a reason but I don’t have anyone watching the game with me to explain what’s going on. 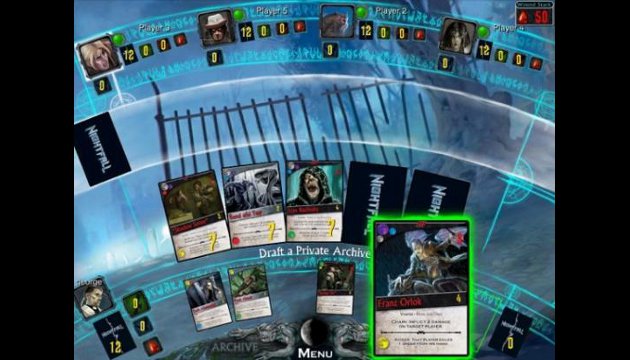 What I need to do, and I just haven’t taken the time to do so, is to play a game against the AI with a set of the official rules at my side. That way, I can better understand what’s happening and why it’s happening. It won’t answer all of my questions, but it certainly can’t hurt.

I don’t want this review to sound like I don’t enjoy the game, because that’s not the case. There’s a really slick, atmospheric game here, I’m just struggling with how to play it. Hopefully one of my more learned compatriots can chime in with a review of their own and give their perspective. I think that if Ascension is the extent of your deck building (and I hate to classify either game as such) experience, Nightfall may be a bit of a shock. I’m sure veterans will be able to jump right in and start rending and tearing with the best of them.

What I do know is that I am extremely impressed with the effort Playdek is putting into these games and I can’t wait to try out Summoner Wars when it hits. I’ll probably be in the same boat when it comes to understanding as with Nightfall, but if Playdek keeps putting out these quality adaptations, I’m willing to give them a shot.

For those of you looking for a game, you know where to find me. Might as well score some wins before I figure out what I’m doing. Get in while the getting’s good.

7 thoughts to “The Layman’s Nightfall Review”