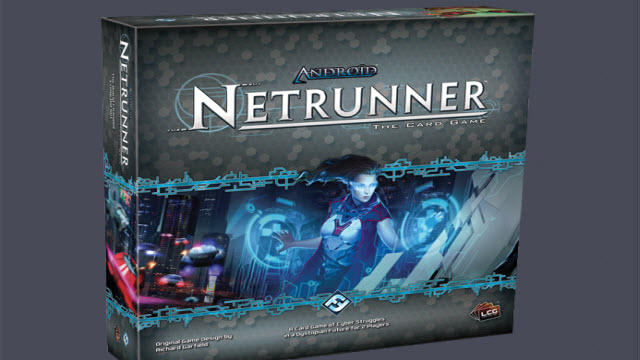 Richard Garfield’s Netrunner was his follow-up to Magic: The Gathering. Netrunner is one of the best games ever published, an amazing asymmetrical design with a very 1990s Cyberpunk theme and some hilariously dated Lawnmower Man-style artwork. And I never thought it would be back in print.

Enter FFG. They’re doing a new edition of the game in their LCG format, which is a fancy way of saying “non-random CCG”. They’ve also rethemed the game somewhat to fit in with their undernourished, generic Android sci-fi noir setting. It’s not that big of a deal since the original game needed some new artwork and updating anyway. It sounds like the core gameplay, wherin a Runner has to break through the Megacorps’ security measures to access encrypted data, is intact.

I’m guardedly excited. When FFG takes a respectful, “don’t fix it if it ain’t broken” approach they do some amazing reprints like Cosmic Encounter and Wiz-War. When they try to mark their territory and force the FFG brand into games where it doesn’t belong- as in Dune/Rex and the royal screw-up that was DungeonQuest- the results can be disasterous. There’s some talk in the copy of factions, which means there may be some rules and format changes and that’s got me nervous.

We’ll find out in Q3 of this year.