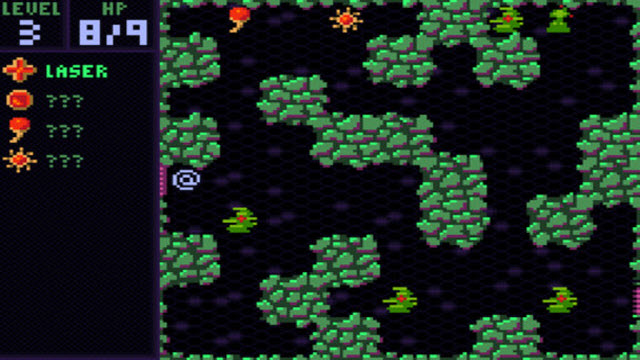 I somehow managed to happen on two unique IOS games by the same designer almost by accident while poking around looking for a way to get my kicks on the iPad for a dollar or two. Both are by a guy called Michael Brough, one is a starkly minimalist Roguelike and the other is what could best be described as the Atari 2600 game Combat crossed with the board game Roborally. They’re simple indie games with clear, clean concepts, uncomplicated gameplay, and a specific focus on a small handful of effective mechanics.

Zaga 33 looks like a Metroid Roguelike at first glance, and that’s actually a fairly apt way to describe it. There’s a similar sense of dark, forboding loneliness similar to the NES original, albeit in a much simpler game. You’re an ampersand armed with a single artifact with a special ability, and your goal is to make it through 25 levels of the planet Zaga 33. Along the way, various enemies with different behavior profiles will harass you while you try to collect artifacts with unknown uses. One could be a nuke, another could be a drone, yet another might heal your paltry nine hitpoints. They change every game, just like the potions and items in a more full-bodied Roguelike.

But there’s no grinding in Zaga 33- no pets, no gods, no shops, nothing but you and hostile aliens. It’s simply about moving across the screen while either avoiding or killing creatures, outsmarting them when you have no weapons or maybe using a quake artifact to change the map. It’s really tough. Probably not Nethack tough, but the game offers a substantial challenge and since it’s turn-based, a single bad move can put you at a disadvantage.

This was a problem until the game was updated. It had a wonky control scheme where you touched in the direction you wanted to move. The new version has a more precise swipe control. But I still haven’t seen past level 12. It’s a dollar app or you can play it for free on the PC. 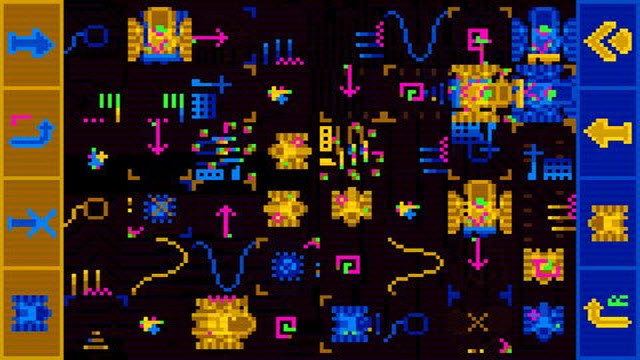 Glitch Tank is a card-driven digital board game that also has low-tech graphics. Two tanks meet on an empty black battlefield. Each turn- or simultaneously if you play with the real-time option- players play a card that either moves, turns, or shoots with your tank. With the turn-based option, they’re revealed at the same time- it’s not IGOUGO at all. There are cards that lay mines and drone cards that create smaller tanks that also move with your main vehicle. The idea is that you get your tanks lined up with the enemy and drop a fire card and blow them up. It’s that simple.

But it gets complex when the screen is full of tanks that can push each other into mines or crash and you’re forced to bide time until you draw the card into your hand that you need. There is no pass option, you have to do something. It can be nerve-wracking when you’ve got one hitpoint left and you’ve really, seriously got to get out of the other player’s crosshairs. In real time, it can get pretty hectic but I prefer the more measured play of the turn-based game.

Glitch Tank is for two players. You can play with one person sitting on each side of the iPad or you can play with a decent AI controlling the opposition. Either way, it’s a fun little game that will appeal to fans of games like Wings of War…or Combat for that matter.

So there’s two good IOS games for you, neither of which have cute animals, IAPs, or “freemium” schemes. More like these, please. And more from Mr. Brough.

3 thoughts to “Zaga33/Glitch Tank in Review”