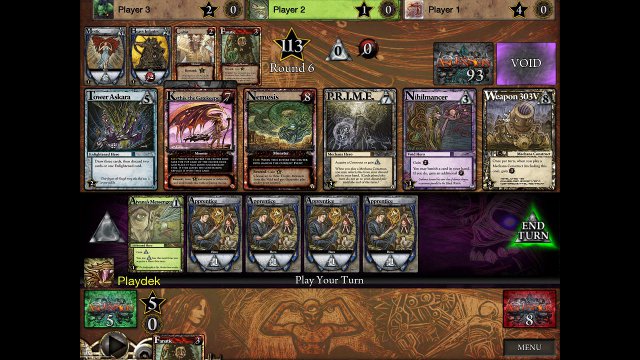 Just when I was tentatively dipping my toe back into the Ascension pool, Playdek goes and releases the Storm of Souls expansion. I’ve only played a game or two against the AI and I’m really digging the changes to the game. Being able to treat monsters as extra cards to banish for additional effects adds an extra strategy wrinkle, as does playing heroes to take advantage of the current event card. I haven’t been able to play a full on Mechana construct game yet to see how they’ve been changed, but I’ll get there eventually.

In order to play the expansion you have to update Ascension to the latest version and then purchase the expansion from within the game. Other tweaks come with the update including the ability to change the size of the honor pool before starting a game, a “next game” function for online matches (yay!) and a game timer that goes up to 28 days. You can also pick different avatars depending on which expansion pack you’re using. If you don’t want to spend the full $3.99 for Storm of Souls but still want some new cards, you can purchase a promo card pack for 99 cents. The card pack includes a new hero for each faction and two new monsters. I have no idea if both players in a MP match have to have the promo cards or if the new cards go into the deck for all players.

If you want to get in some games, feel free to hit me up for a match (BrandonNHS). I’m not looking to run 30 games at a time like I used to, but I’m ready to get back into the fray.