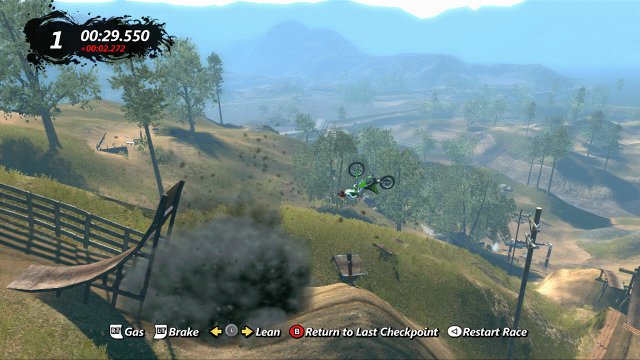 When I was a lad, there was a popular TV show called Kick Start in which teenagers on lightweight motorbikes sedately attempted to balance themselves on narrow beams, or haul their bike over burnt-out cars without falling off. That’s the sort of thing I was expecting when I downloaded Trials Evolution from XBLA. It is categorically not what I got.

What I got was the lunatic bastard lovechild of a threesome between a physics puzzler, a platform game and a motorbike racer in which you guide a hapless avatar through a series of improbable courses featuring high bridges and steep cliffs, while falling off as little as possible. You have only to worry about your speed and balancing your rider backwards and forwards: the game takes care of steering for you, making it incredibly easy to pick up and play. And given the ridiculous physics model the game employs, which can see you jumping enormous chasms before making a perfect landing on a girder the width of a drinking straw, it offers a quite amazingly intuitive learning curve to complement those simple controls.

And a good job too because in most other respects the game is chronically unforgiving. The difficulty curve is pretty smooth but reaches the same unbelievable heights as some of the jumps in the later stages of the game. Not that you should worry about this if you don’t like tough games, as it has a medal system and to get the basic bronze level you can take as many tries at a track as you like and most are liberally peppered with restart points. Even the least able players should be able to unlock pretty much everything in the game just by accumulating bronzes. If you want challenge, gun for silvers. If you’re a masochist, shaking desperately with the need for a truly punishing session of self-brutalisation then gold is probably your thing.

But you could find all this out from any review of trials evolution. Most of them seem to miss the point about the game, which is simply this: what makes the game special is not the intuitive, quick-fix game play. Nor is it the nicely graded but ultimately jaw-shattering difficulty. Nor is it the clever genre-busting design. No. What makes this games special is the incredible, visceral thrill you’ll get by shimmying a feeble little dirt bike up to the edge of a cliff, pausing briefly to admire the view across the distant plains beyond before hitting the accelerator and plummeting several hundred feet at sickening speed, rolling perfectly down then up a ramp, tilting the balance to spin the bike as you leap before the back tyre grips dirt again and you tear off, spraying mud, across the uneven surface toward the next set of insurmountable obstacles. 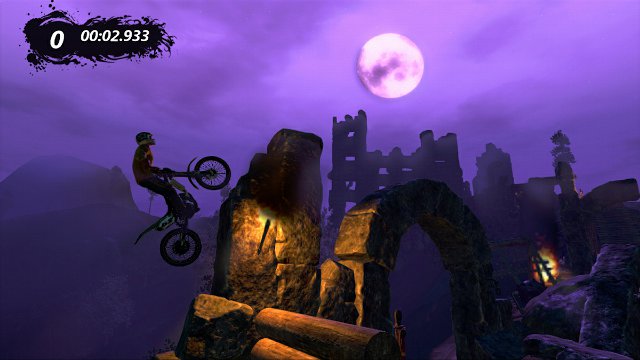 The designers knew this. You can see it in every inch of every level design with their jaw-dropping backgrounds, insane obstacles and choice of settings which includes war zones, high-rise building sites and non-euclidean nightmare dimensions. You can see it in the way the game scripts explosions, geysers, even artillery in unlikely places, some miraculously missing you by inches, others an integral part of the game play as they boost your jumps and turns. You can see it in the massive slopes down which you career on a tiny bike at unforgiving speeds. It’s a game that made me beam with sheer joy at the impossible thrills on offer, even as it bludgeoned me repeatedly with the blunt instrument of its difficulty. The game even kills your tiny avatar in a different way at the end of each short course, just to make sure there’s no letup in the entertainment on offer.

The trouble with a lot of XBLA downloadable games is that whilst many are very good and very daring, they’re also very short. Comes with the territory of small developer teams, I guess. This is not, however, a criticism you can level at Trials Evolution. The basic single-player game will probably clock in at the five hours or so that’s fairly typical for an XBLA title but once you’re done with it, it’s not the end of the game. For starters there are multi-player modes that allow you to race in real-time against other players on the same console or Xbox live, using ghosts to track the progress of each player to make sure there’s no wheel-bumping to add further problems to the already tough courses on offer. And if that’s not sufficient there’s a track editor for you to design your own courses and, perhaps more importantly for those of us without time to burn, the ability to download other people’s courses. I’m pretty confident that this setup will allow the game to keep on throwing down its challenges for you for as long as you’re happy to accept them.

Trials Evolution is perhaps the most perfect example of bite-sized entertainment I have ever seen, something that offers an equal amount of pleasure for five minutes or five hours as the mood seizes you. But, don’t be mistaken, bite-sized entertainment is precisely what this is. There’s no story or career mode to engage you or, for that matter, to distract you from the core experience the game offers. You’ll accumulate money you can use to buy pointless cosmetic upgrades but after briefly noodling with your riders’ appearance you’ll cease to care. And there is the inescapable whiff of offering empty rewards to encourage equally empty box-checking replays in the medal and achievements system. That’s the flaw: the game would perhaps have benefited a little for a better and more engaging overarching framework to the design. But what it’s designed to do, it does extremely well indeed.

One thought to “Trials Evolution Review”