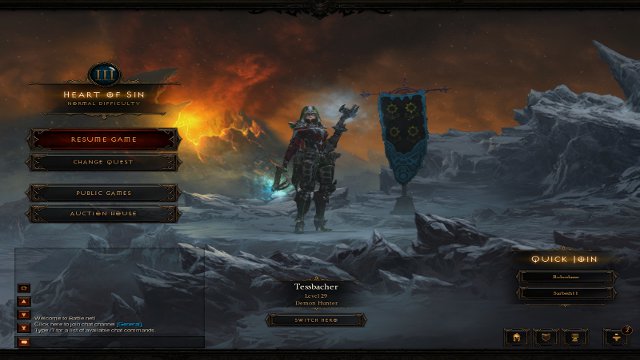 I’m angry. I have many reasons to be angry at the moment, but this anger is leveled directly at me. I’m playing Diablo 3 quite a bit — less than some (my NHS friends list is filled with people who have finished the first playthrough) and more than others (basically Todd). I just beat the third major boss of the game with some help from veteran NHS reader nicthaninja and his wily Witch Doctor. I’m sitting at level 29 with my Demon Hunter Ms. Tessbacher and can see the end of the campaign in sight. For the record, I hate how the game doesn’t allow for spaces between names. Silly.

I’m not a die-hard Diablo fan. I played the first one, like everyone else my age when it came out. I was fresh out of college in late December of ’96 when it was released and I played that damn game on our PC lab’s LAN on the OSU campus to the point of exhaustion. Still, I never finished the game. We’d all get to a certain level and want to play a new character type.

I played Diablo 2 sparingly. I remember reaching an area with little dudes who shot blow darts at you. I got annoyed and quit and never played it again. This was the summer of 2000; my wife was pregnant, I just just lost my job at Computer Games Magazine and was trying to live the life as a freelancer (not advised), working for the magazine as well as GameSpy and anyone else who would have me. Finishing Diablo 2, when I wasn’t assigned to review it, was not high on my ‘gotta do’ list. I was reviewing every sports game imaginable and building the reputation as someone who hated games.

So here we are with Diablo 3, a game that I was never pumped about like others around these parts and yet I bought it a day before it was to be released. It was an impulse buy, really. It always seemed odd that I never finished a Diablo game…even though this fits my track record with these types of games — I rarely kill (or see) that last boss in a hack and slash rpg.

So I’m playing a little every day, still not quite sure if I’m technically having fun or not. Oh I’m playing, though. In fact I’d like to be playing right now as I type this. I’m so close to the end (I think). But why do I want to get back to playing? It’s a question I can’t answer with any level of certainty.

There is something inside the design of that game, and games like it from Sacred to Fate to Torchlight to Din’s Curse, that latch onto the addictive center of the brain and won’t let go. When I am not playing, I find it more and more difficult to reason with myself as to why I want to play. On Normal, it’s a fairly easy game. Sure I’ve died some, but there’s very little penalty and I am back in the fray in seconds. I love the new skill system now that I am a higher level, but in the end I’m pressing the mouse button. A lot. Killing waves of monsters in the same way over and over and over again. Somersault, knife fling, multishot. Repeat.

So what is it?

Is it the level grind? The dog treat joy of earning a new skill?

Is it the gear? Just seeing your avatar in all its glory decked out in your shiny new helmet? 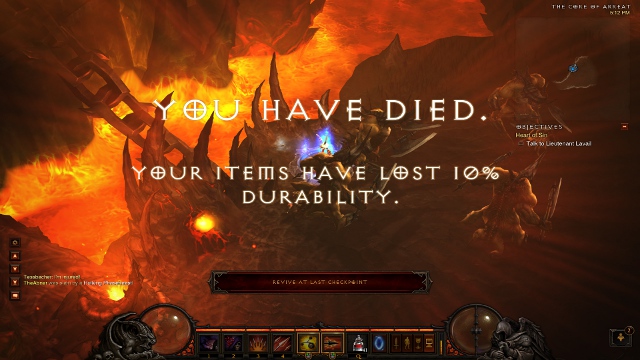 I found myself asking these questions during my two year World of WarCraft addiction when I finally asked myself one day, “Why am I doing this?” I couldn’t reach an answer and I have not played WarCraft in years — and have zero desire to do so again. Diablo, on the other hand, is different. I’m still asking that question and coming up with the same vacant answer and yet the minute I am done writing this I’m going to go back to killing demons.

There has to be a reason why games like Diablo instill this drive, this need to play. “Because it’s fun” isn’t an answer, either. It never is. I can tell you why I played the Witcher 2 twice or why I played Baldur’s Gate five times start to finish. Or why I played Dark Souls to the point of absurdity. I can give you specific, detailed reasons why I loved those games.

Diablo takes all of the skill that I have as a game critic, and I’d like to think after 16 years there is some skill there, and smacks me across the face and sticks its fingers in my eyes and tells me to piss off and just keep with the clicking. I cannot reason with Diablo 3. Every ounce of my critical eye tells me this game is mindless tripe whose only redeeming feature is that of the dangling carrot. It’s an online only game that is designed around playing by yourself. It’s been hacked. It had a terrible launch filled with instability issues.

And yet it defies my own feelings about it. Because I am still playing, and have every intention of running through another time with a new character build.