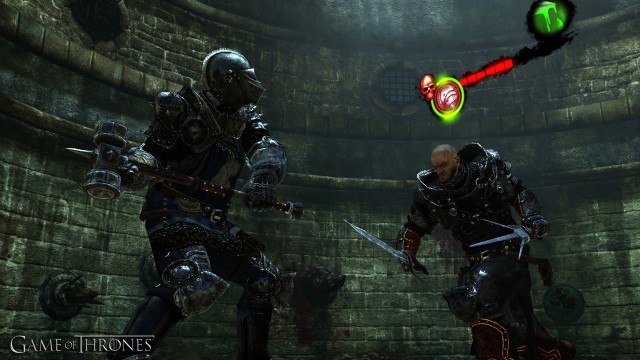 I finished Chapter 1 today of the Game of Thrones RPG from Atlus/Cyanide. You have to understand that I go into this with a huge deal of skepticism simply due to my experience with Cyanide’s games — specifically Blood Bowl and the Game of Thrones RTS. I like Atlus as a publisher quite a lot so I’m hoping for the best but expecting…well, Cyanide.

This is merely a cursory look as Chapter 1 isn’t terribly long, but so far — I (mostly) like this game.

What strikes me is how old school the design is. If you are unfamiliar with A Game of Thrones the RPG it’s a 3rd person game set in the George R.R. Martin A Song of Ice and Fire universe.

You almost always read “action” after 3rd person but this is anything but an action game. It’s the anti-Dark Souls in terms of combat. Mechanics like these are a relic of role-playing games past. That’s not necessarily a knock on it but it’s not what I was expecting. It’s sort of…Mass Effect/Dragon Age-y in its approach. Here’s how it works:

You have your avatar, in all of his 3rd person glory. You start as a veteran of the Night’s Watch with your war dog companion. You move around like a normal 3rd person game, but when combat starts you can slow-motion pause the action. It’s not totally paused — it’s sort of like the “pause” mechanic in Witcher 2. Things are still moving so you don’t have unlimited time but it’s slow enough to make decisions.

What you are deciding in AGoT is what skills to use. You start off with a few skills from which to choose –a knockdown attack, an attack that stuns foes or a headbutt. Each skill requires energy so you can’t just spam them over and over. You may also chain skills together if you have enough energy. So I can try the stun attack followed by the headbutt (which causes extra damage). If you don’t use a skill you just do a regular attack and you don’t need to keep pressing buttons to do it, it will auto attack your desired target. The game will also automatically move you to the closest enemy after you kill your current one. Very old-timey.

It comes off feeling almost turn-based in its pace.

When in a group you can switch members by pressing Y or even issue commands to your war dog by pressing LB which brings up its own radial menu. There is a certain amount of pleasure I still get from a slower paced combat model such as this. It’s not hands on tactical like Dark Souls or Witcher 2 — it’s more methodical, but I don’t mind that. 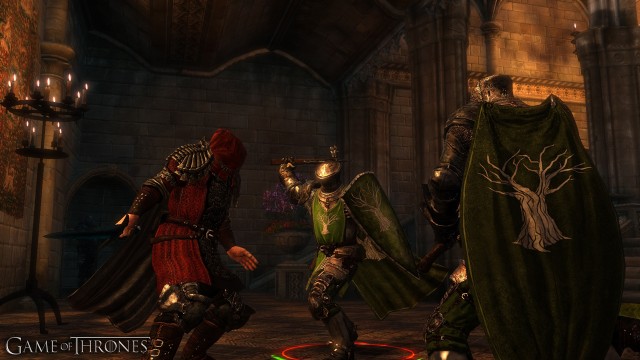 The writing isn’t bad, either and much like the books no character is safe — you learn that as early as Chapter 1. There is a metric TON of dialogue so far and I’m thinking you may need to be a fan of the books (or the show I guess) to get a lot out of what is going on. They include a codex but it will help if you know King’s Landing from Castle Black. Hell I even like the dialogue tree options because unlike a Bioware game you don’t click on EVERY option eventually — you have one choice in how to approach a situation verbally and it is not clear cut how “best” to handle it. I really, really, like that.

I also love the perk system. You can choose “advantages” and “disadvantages” when creating your character — like “gifted” or “asthmatic” but you can also earn them as you play. I tortured a Wildling early on and gained the Sadistic trait. I like how your actions can shape your character; a nice touch.

There are some oddities, of course. I don’t like that a veteran of the Watch will find a Wildling armor set that is better than what he’s wearing and don it without hesitation. I put on a weird demonic looking helmet which looked ridiculous in context. Same with some heavy armor I found. I mean just…no. I also don’t like that I can find coins in crates. Come on, now. Will we ever get past this in RPGs? And yeah, it’s not the best looking game around, either. Murky textures, mediocre animations, the budget was clearly limited here. This isn’t a sexy game by any stretch. If you demand top shelf visuals, move along.

This game, and again I am a mere two hours in, comes off as Todd likes to say as a “slow burn”. It’s not instant action but it shows promise.

After writing that I went to Metacritic out of curiosity to see that the game is at a rough “54” score. IGN gave it a 4/10 which for IGN is like saying the DVD is radioactive. Guess I’ll have to wait for it to turn terrible?

16 thoughts to “A Game of Thrones: Old School Role-Playing”