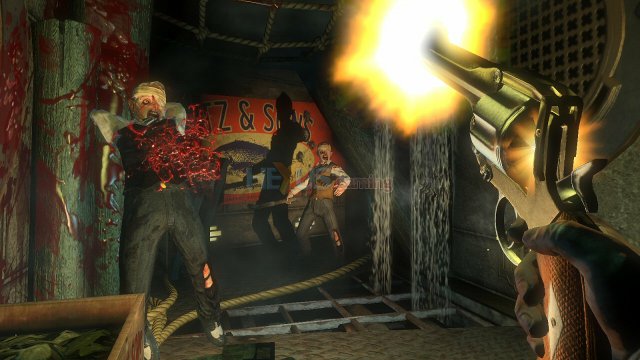 When I got my 360, with all the enormous catalogue of quality games I could have chosen from to catch up on, the one I picked first was Bioshock. It came top of the list because I was intrigued by the premise behind the game, the lure of a traditional shooter with horror elements in such an esoteric setting. Plus, it was cheap on the used market.

Three chapters in, I have been somewhat disappointed. Bioshock is fun. In fact Bioshock is pretty much everything I was hoping it would be. But the respawn model has really spoiled it for me. Once I realised that there was pretty much zero penalty to dying, other than a short walk back to where you were before, and that you could effectively kill most things in the game by repeatedly hitting them with the wrench, the very first weapon you got, all the challenge and some of the interest drained out of the game. I have a full wallet because buying stuff is pointless: just use the wrench. I’m perplexed how such an awful design choice made it into what should have been an excellent game. Yes, you *could* refuse to use them, and rely on saves but why bother? Plus some of the nasties in the game – Big Daddies in particular – look pretty much unbeatable in a one-off fight with the early game weapons and ammo alone, so re-spawning looks kind of built into the play. The location of re-spawn booths close to difficult fights would tend to confirm that hypothesis.

But I’m going to keep playing anyway, because the story behind the game in indeed interesting, and the setting is indeed esoteric. It also seems to make some explicitly political points, a rarity in games design nowadays. And it helps that so much love has been lavished on the visual design of the game. It didn’t give me the wow factor that I’d been craving, but it was fantastic to see how well unified the visual elements are, everything at once suggestive both of setting in time and place. The horror elements work well too, shadows looming on the walls, lights flickering on and off at appropriate junctures.

But what really got me was the sound design.

Other than soundtracks, I don’t think I’ve ever been specifically impressed by sound design in a game before, but the way it’s used in Bioshock is astonishing. For starters, there’s the ambient background noise of clanking pipes and hissing steam that hovers of the edge of your hearing like an irritating mosquito, simultaneously setting the scene and keeping you jumpy. Then there’s the use of music: no consistent soundtrack, just bursts of sudden discordant piano or saxophone music when you least expect it, often for no particular reason than to make you nervous.

The crowning glory though is the voices. The way Little Sisters chat away to their hulking guardians, just like over-keen toddlers blathering on at a doting parent is unsettlingly bizarre, although you do wonder why the Daddies are always called Mister Bubbles. The sudden voices over the PA system, reminding you that this was once a functioning society with laws and customs all its own. And the set pieces with the Splicers gibbering away to one another or to themselves, featuring clever scripting and excellent voice acting to sound convincingly, disturbingly, insane.

But what really gets me is the triggered vocalisations in real time play. I can’t remember another game in which the enemies actually talk to one another. In most games, of course, you’re hunting aliens or monsters or some such, and they can’t speak in a manner you understand. Some do talk, like the various adversaries in Halo for instance, but they utter repetitive phrases keyed in to your actions. In Bioshock the Splicers talk to you, and they talk to each other, and they talk apparently for the sake of hearing their own voices. The resulting conversations manage to avoid excessive repetition and actually make some sort of coherent sense, giving you a peculiar sense that these were once real live people in a real live place who’ve been driven over the edge, simultaneously creating unease and sympathy in the player.

That sense adds enormously to the already powerful feeling of immersion you get while playing. So it’s doubly tragic then that the designers chose to destroy the sensation of disbelief by creating a ludicrous re-spawn model.

17 thoughts to “Bioshock: Listening to Rapture”