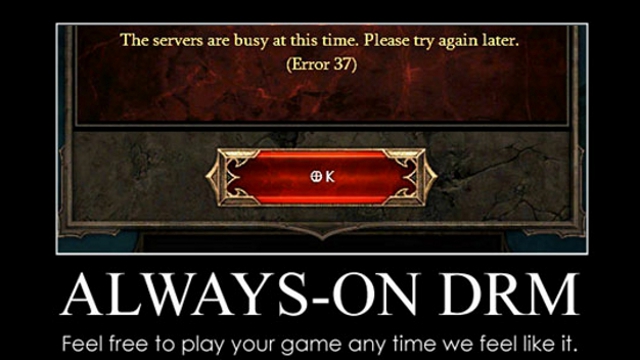 There’s been no shortage of pixels expended on Diablo III over the past couple of weeks. Reviews have mostly been very positive, some critics have talked about its worryingly addictive qualities in the face of what ought to seem like relatively weak play and a lot of gamers got very angry over their inability to play right after launch due to server overload. Some people have made light of this and, in fairness, entitlement-rage in gamers is never a pretty sight. But to me, this is indeed an occasion for rage. Serious rage. Just not over entitlement.

The fury unleashed by the initial unavailability of the game was a consequence of its DRM model, which requires players to be online all the time even when playing solo. However, that DRM has other consequences that don’t seem to have been widely considered. It means that if your broadband provider has a blip, as is not uncommon, the game boots you out and you may loose progress. If there’s a broadband outage, you can’t play. If, like me, you’re fond of taking a laptop on road trips or flights to help keep yourself entertained, then Diablo 3 as the source of that entertainment is not an option. The product which you’ve paid good money for is not really yours at all – your access to it hangs on the whim of a number of outside agencies who at any time may fail to live up to the service you expect, or pull the plug entirely. There are advantages too, of course, such as the ease with which you can join multi-player games and cloud storage for your characters, but Blizzard could easily have given you these benefits of always-online as an option, providing a get-out clause for people who want to play on the move. They didn’t.

This is a new and extremely dangerous precedent. Think about it for a moment: by accepting that this is a valid model for the publisher of a video game to thwart pirates, you are effectively condoning similar action by the purveyor of any digital content. You’re telling the people making the next generation of games consoles that you don’t mind if you can only play a game on it – any game at all – when it’s online. How about if you couldn’t watch the DVDs you own without an internet connection? How about if you couldn’t play the MP3s you own, or read the e-books you’ve bought, without an internet connection? Does that suddenly seem so fair and reasonable as it does with a video game?

If you think I’m overstating the issues, then perhaps you should know that copyright people are very happy to leverage child pornography in order to get governments and legislators to do what they want. That’s the kind of people you’re dealing with here, and to think they aren’t looking at the widespread acceptable of the Diablo III DRM model and not twitching with delight, or that that it’s not being stored as ammunition for use in the debate over denying access to used games, is naive. If you’re a Diablo III owner, I suggest you at least stop and think about the wider ramifications of what you’re signing up to before you next play the game, otherwise the unfortunate consequences could be with you sooner than you think.

34 thoughts to “The Slippery Slope of Diablo’s DRM”