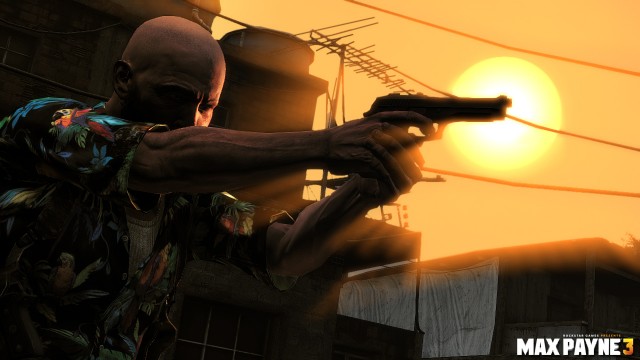 I’m not going to call this a review of Max Payne 3 even though my time with the game is finished. I played the single player, on easy, and completed it. I didn’t touch it on the harder modes, nor did I attempt New York Minute mode or arcade mode. The former was not unlocked due to my meager difficulty setting, the latter may have been unlocked, but I didn’t check. I also didn’t touch the multiplayer for even a second because seriously, why would I do that? Other people may be interested in new multiplayer experiences, but not this guy. We can take it as a given that I’m going to suck at multiplayer, regardless of the new bells and whistles implemented therein, so why waste everyone’s time?

Don’t get me wrong, I have a pretty strong opinion of the game, I’m just not comfortable calling this a review given that there’s so much of the game I didn’t touch. That being said, let’s get to it. 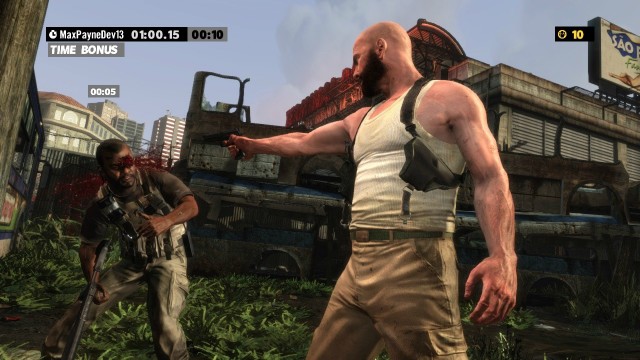 I played the previous Max Payne games on the PC and while I remember loving the hell out of Max Payne, there is very little about Max Payne 2 I remember, save for the cover. I know there was someone named Mona although that may be a lingering memory of that terrible Max Payne movie. I have a feeling that the new setting and the diversion from the noir-heavy feel of the previous Max Payne games may hamper long time fans’ appreciation of the game. For me, though, all I remembered was bullet time and James McCaffrey’s excellent voice acting.

Both of these things are back in spades, so if all you want is slo-mo shooting and gruff, sarcastic delivery, there’s more than enough of both here to keep you entertained. If what you want is an excellent story and deep character development, prepare to be disappointed. Don’t get me wrong, there is a story here, and it is thankfully devoid of the larger thematic attempts that traditionally dog Rockstar narratives but by the time the big twist is revealed, a story element that is as trite as it is financially untenable, you’ll likely be looking to see things through just to give Max something to be successful at, and less because of some sense of moral outrage. 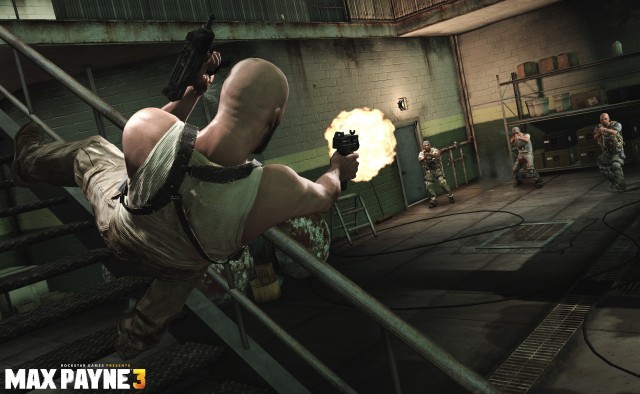 Despite the narrative stumbles, I still really, really enjoyed this game. Half of that has to do with the portrayal of Max and the game choosing to get away somewhat from the noir roots. Don’t get me wrong, I love a good noir tale, but I seem to remember Remedy choosing to make the game noir by giving Max a mouth full of noir phrases, each one more clichéd than the last, a choice that wore on me as the series moved on. This game has noir elements, certainly, but Rockstar chose to tone it down, instead portraying Max as less of a noir anti-hero and more as a guy who completely screws up everything that he touches.

Any by everything, I mean everything. There’s a reason Max was chosen to come and protect the Branco family, the roots of this choice explained via flashback missions that have Max and his new friend Passos shooting up beautiful Hoboken, and while Max’s ability to wield pistols has something to do with it, his constant state of drunkenness makes up the rest of it. As the game progresses, everything Max touches turns to shit but he persists, doggedly chasing the notion that if he keeps at it, maybe he can fix the next thing, or the next thing, or the next thing. By the end of the game, I wanted to finish it because Max wanted to see it through and I thought that maybe if he could do something right, he’d find some measure of peace. The fact that Max understands why he was chosen for the job, and he sees that as coming back to bite those responsible on the ass gave me an incredible sense of satisfaction. As Max says, “Say what you want about Americans, but we understand capitalism. You buy yourself a product and you get what you paid for.” 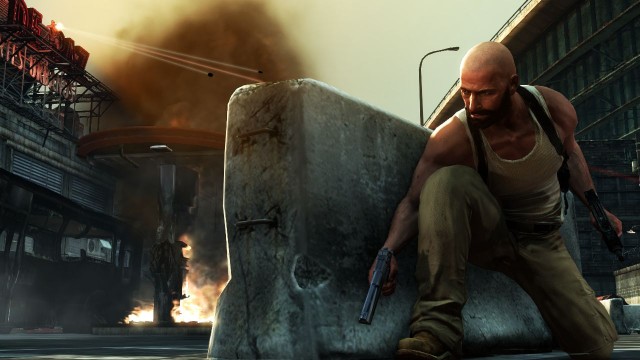 The game’s use of Tony Scott style, “Man on Fire” cuts and drawing spoken words on the screen may further push away those looking for the noir angle, as will the bright streets of Sao Paulo but for me, it worked. I admit to being sometimes enamored with style over substance, and in this case, I think that’s a fair criticism but at the same time, it allowed the environmental artists at Rockstar to flex their technical muscles and create the best looking Rockstar game to date. When your main character is only good at one thing, killing bad guys, you can’t rely on a steady progression of powers or abilities to keep your player interested, interest has to be maintained via a selection of excellent set pieces and gunfights.

It is here that players of the previous Max Payne games will feel right at home. Max can still enter bullet time, charging up his ever dwindling meter with precision shots, as well as perform shootdodges, slo-mo dives for bite-sized chunks of ballistic mayhem. Max still chokes down painkillers to restore health, but with the added twist of Last Man Standing, by which you can automatically restore some health via painkillers provided you can single out whoever fired the last bullet with your name on it and kill them before you bleed out. All of the combat elements combine to form glorious, violent dances where men crumple where they stand, drunken heroes dive for cover and the last enemy is dispatched with a slow motion symphony of cold steel, cordite and exploding brain matter. 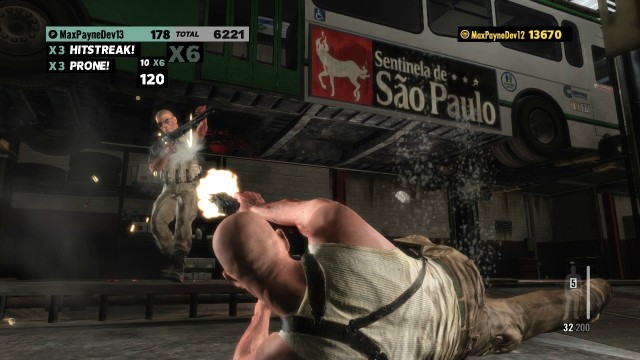 I have a feeling that your enjoyment of the game will come down to whether or not the excellent gunplay and voice acting is enough to make up for the lack of story or supporting characters with real depth. Plenty of other games have excellent gunplay. Plenty of other games have excellent voice work. I’m having a hard time coming up with a game that had both in the same amount as this game does, but I’m sure there are some out there. For me, it was more than enough. For others, particularly those that have a deep affection for the series, it may not be enough.