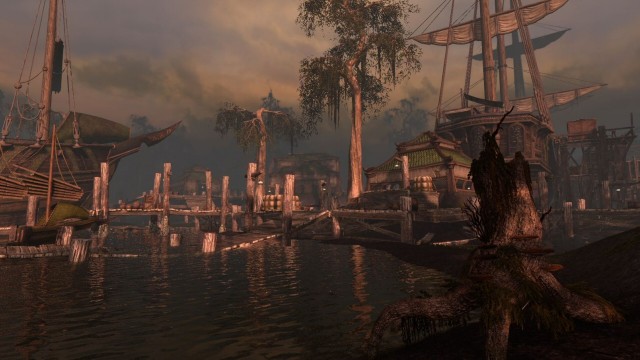 It seems an odd time to develop an mmo and while it is impossible to deny the staggering popularity of The Elder Scrolls games, it is very much an uncertainty whether or not Bethesda can lure the players of the strictly solo RPGs to jump online and share the world with other adventurers.

We always say that it is unwise to overly praise E3 demos, but it is equally unwise to be too critical, particularly with a hands off developer driven demo.

It looks sort of…bland. The combat, while action oriented and not old school mmo, still has powers and cool downs (despite what the Zenimax rep said during the demo). The idea of public dungeons seems taken right out of Warhammer Online and the public quest system. There are private instances, raids, and pvp with hundreds of people per side.

It is also a low min spec game, which should be laptop friendly and not too graphic intensive but should look sharp on higher end rigs. The demo we saw looked…ok. The vistas look fine but the character animations need work.

There are novel ideas here, such as branching storylines and bonuses for playing as a group such as turning a simple fire spell into an area of effect firebomb just by grouping with teammates.

There still didn’t seem to be too many features here that will entice those with mmo fatigue unless you are just itching to join forces In the world of The Elder Scrolls. I realize I may not be the target audience here, but I have played my share of mmos and I’m not sold yet.