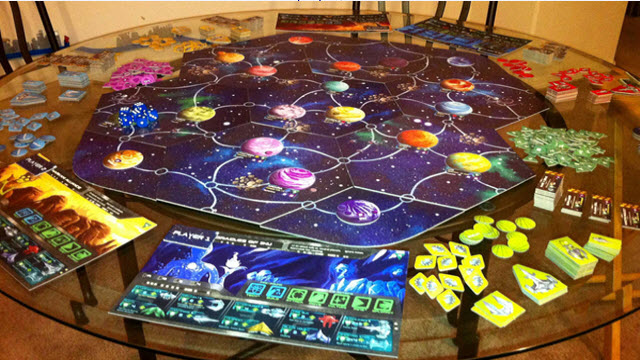 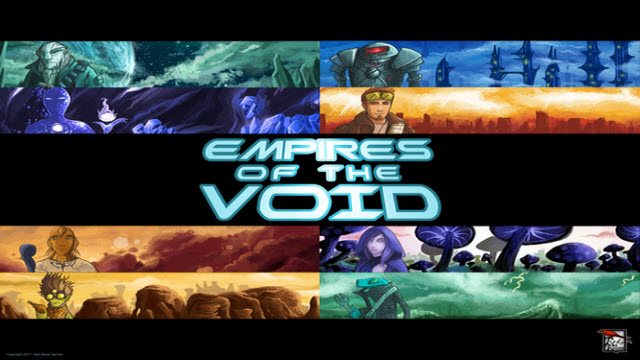 Ryan Laukat’s Empires of the Void is a very solid, very smartly considered but derivative space conquest-themed 4x game that’s been recently Kickstartered and released into the wild. It’s a handsome production with charming, cartoon illustrations that are very welcome in a genre that tends to go for stiff and sterile or grit and grime. It’s big on the table with tons of counters but not a whole lot of rules bulk or complication, and although it doesn’t have the scads of plastic miniatures these kinds of games usually feature, there’s still multiple ship classes to play with and lots of dice to roll at them.

The problem with the game isn’t the game itself, which I would absolutely recommend to tabletoppers looking for a smoother-playing, lightweight game in the Twilight Imperium (or Master of Orion) mold. It’s that it’s coming so soon after Eclipse, one of the best games in its genre. Not to mention that Twilight Imperium is still widely played and considered by many to be the last word in building cardboard space empires. Then there’s games like Ascending Empires, Space Empires, and any number of other jumped-up Dudes on a Map games with tech trees and other 4x gameplay elements.

So this game has got to stake a claim and state its differentiators up front. When I first got my review copy, courtesy of Mr. Laukat, I was initially worried that it was going to miss this mark and suffer the same fate- mediocrity followed by obscurity- that Galactic Emperor did a few years back. That was the first game that made a play for the TI-lite crown. After a couple of games, I’m not ready to mothball Eclipse but I think there is definitely a case to be made for Empires of the Void.

These games are kind of like falafel joints. One might have the best hummus, but another has better Baba Ganoush and grape leaves. Then another has the best falafel. TI3 has the epic, sweeping scope and detail down pat. Eclipse has the economic and technology angles completely cornered. With its finger-flicking combat resolution, I’d have to give the combat edge to Ascending Empires. But Empires of the Void, so far, has the best Star Trek sense of diplomacy, negotiation, and politics.

The setup is standard. Everybody gets a race and a home planet from which they send ships out into the titular void for typical 4x goings-on. There’s a bunch of races, more than the four players the game supports. Races each have advantages and different start-up material. The map is a modular, point-to-point thing with a couple of roadblocks in minefields, asteroids, and tentacle monsters (dubbed “ancient defenses” for reasons unknown). It looks more like Merchant of Venus than TI3, and the presence of specific and very different alien races on each of the planets on the map makes the game world feel more alive and vibrant than other games where the planets that are little more than resource numbers.

As players head out from their home planet with fleets of Diplomat-class ships or war vessels ready for battle, the idea is that you can lay claim to these populated planets either through diplomacy or violent conquest. Diplomacy requires you to spend some Culture actions to draw cards. Each race has a particular disposition- Militaristic, Capitalist, Scholarly, and so forth-and the more matching cards you have, the lower the die roll needed to sway them to fealty. Make friends, and you drop an Ally token on their card and they give you access to any resources (needed to build some technologies), income, influence in the victory point-generating Galactic Council, and a special ability. It’s a cool touch that some races do things like give you access to special ships that you otherwise can’t build.

But if you don’t want their junk, you can just blow them up by rolling a combat success against them, which makes them enemies and a subjugated people only willing to share their money and materials. I didn’t care for fishing for cards to get the matching sets at first, particularly since you only get three actions per turn and it felt like a waiting game. But thematically, it makes sense at an abstract level. You’re negotiating, finagling, maybe learning about their culture to influence them, and bartering. And there are technologies that give free Culture draws and increase hand limits. But you’ve always got the quicker nuclear option, which is not only viable but also advisable for certain races.

There’s also an interesting- and subtle- concept regarding the cards. Over the course of the game, as planets are claimed their utility actually changes. Every card has an effect, activated by turning in two or three sets of matching cards. So by the end, they almost serve a completely different function. 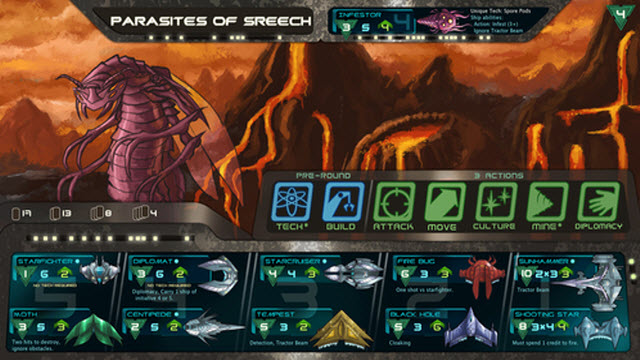 I don’t like that the tech tree is so short and shallow, with particular techs all but required to be competitive. Actions do feel somewhat restrictive, with the Move action initially only moving one ship at a time but there again, with those must-have technologies it ramps up over the course of the game. The combat is somewhat ho-hum, with the standard Axis and Allies-style order of battle. It definitely feels like the work of a first-time designer, and I do not necessarily mean that as a perjorative- there’s a great sense of heart and passion on display here that smooths over some derivative and sloppy design moments.

I love the event cards that send Space Pirates out to hassle the galaxy or start crises that happen on planets that areresolved and affect political positions. These narrative events occur without bogging the game down in tracking devices or “effect creep”. I like that there’s so many different aliens in the game and a sense that this setting has personality beyond spaceships and endless warfare. And I really like that there’s loose trading rules so that players can swap money and resources along with threats, bribes, and promises.

Overall, Empires of the Void’s biggest and most important differentiator is that it has sense of fun and simplicity that these other space 4x games do not have. It’s a spirited if not completely original design with some smart streamlining that cuts a little close to the quick at times (that tech tree), but manages to retain its scope and design goals admirably. It’s a fun game with minimal hassle, which is exactly what I like playing these days. It can still run a little long, but the four player cap seems to keep a two hour and change game from being a four hour and change game.

It is definitely a situation where those with limited gaming budgets (of time and/or money) may find themselves asking if Empires of the Void delivers anything unique or compelling in competition with similar titles. Those looking for the hardcore all-day-a-thon game may be better off sticking with TI3, those looking for a more serious, balanced, and intricate design would be better served by Eclipse. Empires of the Void is best positioned as an alternative, “indie” version of this kind of game.

9 thoughts to “Cracked LCD- Empires of the Void in Review”