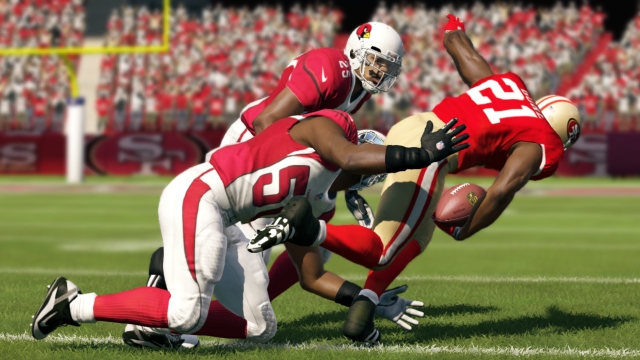 EA Sports puts on great E3 demo presentations. There is a real art to this. While the Dead Space demo was too long and sort of tedious to sit through, the EAS team has this stuff down pat. It is so beneficial when they show you gameplay clips from last year’s game be it FIFA, Madden, NHL, etc. And then follow that up with the new version, showing you precisely why and how it has improved.

This was evident with NHL 13 and FIFA. Seeing the old skating model in NHL and then seeing the changes for 13…it was striking. This is the real focus it seems with NHL and the skating felt great and the inability to turn on a dime this year will fundamentally change how you play both offensively and defensively.

It sounds like a small fix but after you spend time playing it, it is very easy to see the improvements. Example: I was given the gamepad and told to race down the ice; it takes a bit longer to reach full speed in ’13 and you can also press the left stick in for what is essentially a speed burst. I got the sense that it really was a speed “burst” and not a turbo button, but I’ll need to spend more time with it. Still, at full speed I was told to cut across the net; in NHL 12 this would have been an easy maneuver, even with the puck. However, in NHL ’13 my speedy skater tried to turn, his momentum, due to his speed being what it was carried him crashing into the boards. The idea of turning while racing at full speed — it’s simply not going to happen. This will absolutely change how NHL plays — and I think for the better. There was more to the demo from additional animations, the talk of better physics, better defensive positioning, etc. but this was my big takeaway from my playtime. NHL is one of EA’s best franchises and this looked like a no-brainer purchase. 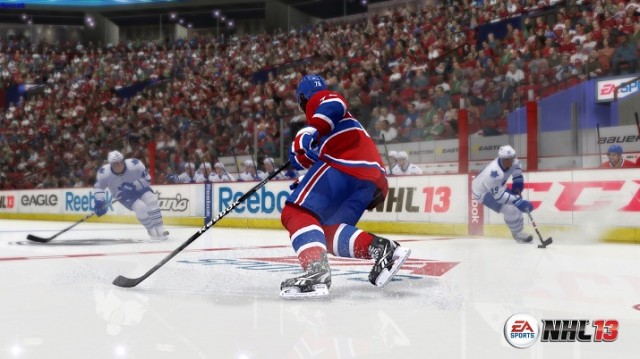 The same can be said of the FIFA 13 demo. There was again talk of new animations, better physics, more realistic moves, the sort of stuff you expect from an E3 presentation. What stood out to me was the fact that players can screw up. This has always been a sticking point with me when it comes to FIFA. I want players to make mistakes and not all behave the same as if they were playing for Arsenal. The example we saw followed a goal kick, as the ball sailed high overhead and beyond the midline, an average player raced for it. The ball went over his head and in the old game, as long as he touched it, it would stick to his foot like glue. In FIFA ’13, he may miss it outright, he may make a great play and control it or it could even go off the side of his foot and end up as a turnover. It looked natural.

Anyway, the other point I took from the demo was the smarter play from AI players — not just the opposing team but the players on your own team. Runs look smooth and no longer are stopped due to a change in position. A player won’t make a run that takes him offside, stopping momentum. It was pretty slick.

If the rest of the game works like this, and if average to low rated players play as such it will go a long way in making FIFA, already a very good game, even better. This was a very good demo, no doubt. 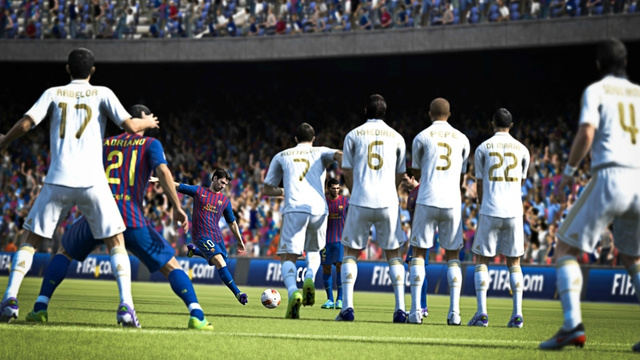 Next was Madden 13. Every year I hear the same thing from whoever is giving the Madden demo. Buzzwords like “Rebuilt”, “Brand new”, “From the ground up” and so on. This year was no different. The boxes were checked when talking to the game’s producer — it sounded perfect on paper. When I played the game I have to admit I didn’t see the huge difference in using the new engine. It felt like…Madden. However, there was one huge takeaway that, much like NHL ’13, could fundamentally change the way the game plays.

If you have played Madden you know this scenario:

You drop back to pass, your slot receiver runs a deep post and your split end runs a fly pattern. You throw to the receiver on the post and the millisecond you let it fly the defensive back guarding the player running the fly breaks on the ball. His back was to the play and in no way should know the ball is even in the air, let alone break on it like he’s a spider with multiple eyes. He races over to swat the ball away. Woo hoo nice play Robot Deion Sanders.

That looks to finally be fixed in Madden 13. DBs will now need to have “LOS” (line of sight) to the play before they react to it. This not only makes passing feel great but it also helps the run game as well. I played for a decent chunk and stopped and started the instant replay to make sure it was working as intended and sure enough…it was. Again there was a lot of stuff discussed in the demo from various trajectories on passes, etc. But this was my #1 takeaway from the gameplay demo. Oh, and that they retired Gus Johnson and Collinsworth (Woo!!) and replaced them with Nance and Simms.

The franchise chat I had with Josh Looman was worth the trip. Now, understand, I have no clue if this is going to work but I LOVED what Josh was selling me. It really is a radical departure from the old franchise mode, which in truth no longer exists. I could write a complete 2,000 word post on what they are trying to do here but I’ll give you the abridged version.

It’s called Connected Careers and it allows you to play as any coach or any player (online or offline) and even switch from one to the other mid career if you like. As a coach you run the team and as a player you have to do what the brass tells you. I love the fact that if you decide to play as the 2nd sting QB in Denver you are not going to play ahead of Manning just because you want to. You need to earn it. The best players play. The thing to remember is that now everything is performance based. Your abilities rise and fall based on incentives. Rush for 750 yards and you stay pretty much the same ratings wise; gash the league for 1,500 yards and watch as your ratings go up (depending on your age). So no longer will a player just blossom into a star without showing flashes of that ability. There is so much here that we’ll need to see work in practice — the draft for example. Players no longer have “potential” ratings. Poof. Gone. You scout them and you can see what the current ratings are (or at least ballpark) but the notion of a player with super high potential is a thing of the past. How will that work? I’m still fuzzy. 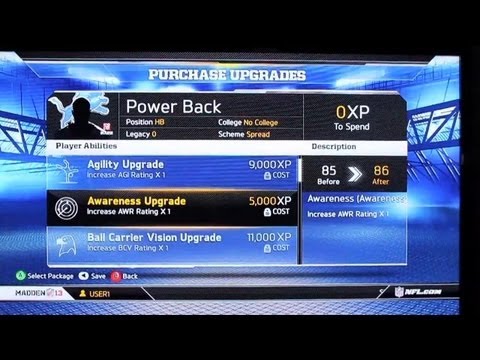 Players, coaches, whether controlled by you or the AI earn XP — so it’s very much like a mini-RPG. It’s potentially brilliant. (and will remind old timers of Head Coach, and if you know Josh this should come as no surprise.) But how will the AI handle that task? There is a LOT of decision making left at the feet of the AI. That scares me.

Free agency has changed from the old bidding method to a 4 or 5 week FA period. Player personality and the system a team uses will also help shape where players sign (not always for the most $$). In addition, player ratings fluctuate depending on the system in place. A great nose tackle might be rated a 90 in a 3-4 and lower if asked to play in a 4-3 scheme.

The downside: player editing is gone (within Connected Careers), NCAA draft imports are gone and custom playbooks have been shelved for the time being. This is a HUGE shift in how Madden’s off the field modes work so having every old feature wasn’t possible. As I said: I applaud this — a standing ovation applause for the balls it takes to turn things on its head like this. Will it WORK? No idea. There are pitfalls everywhere.

But man…I want to see it, pass or fail. My big concern outside of AI management …I wish I had a mouse and keyboard. There is a lot of administration to do if you choose to micromanage.

Moving on to NBA Live. The return of this franchise is long overdue and while I appreciated the enthusiasm from the presentation, the game has work to do. I am very much concerned that the game was not playable at the show, was only shown behind closed doors, is set for a Fall 2012 release and is still in “Pre-Alpha”. Again everything was checked off the feature list during the demo but until I get my hands on the game it’s hard to say much. NBA 2K remains the gold standard of the genre and EA is playing catch up. The demo was mostly feature talk with only a few clips of actual gameplay and with the release coming soon… 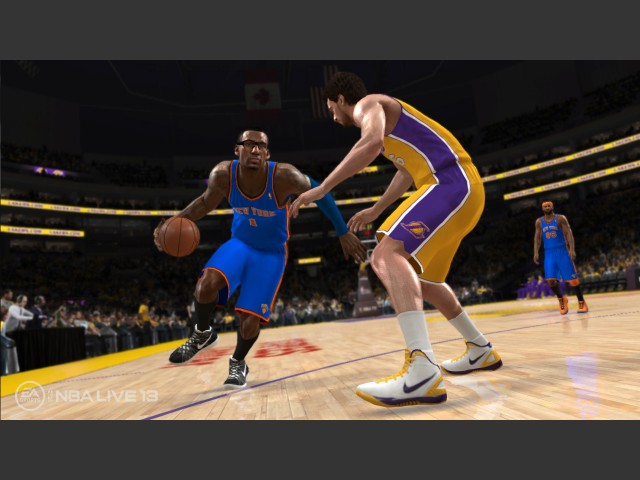 NCAA 13 I played for ten minutes and was late to another appointment. (I was at EA for literally 3 and a half hours). I saw that Michigan was rated an A+ overall and that was enough.

In all, a strong showing from EA Sports with NHL and FIFA looking like day one buys and Madden being the wild card. I really, really, hope that Connected Careers mode works out. It is potentially brilliant but Madden players are notorious for fearing change and hoooo doctor is this different.