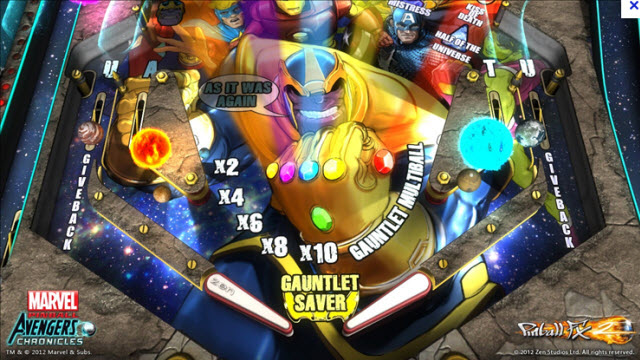 HOT DAMN! Here I was thinking I was tired of ZEN Studios cranking out licensed Marvel pinball tables for the Pinball FX2 platform and then they go and put out a new four table suite that includes a freaking Infinity Gauntlet table. Hear that nerds? AN INFINITY GAUNTLET TABLE. Complete with a boasting Thanos, an Adam Warlock figure, and a gigantic rendition of the titular handwear right there on the table. Of course you have to light up the Infinity Gems!

It’s a bright, colorful table that really captures the gaudy, early 1990s style of one of Marvel’s best crossover stories as well as the colorfulness of the company’s “cosmic” storylines and characters. It’s also a really fun table with lots of cool surprises that I don’t dare spoil. Apart from the one where the table is literally flipped upside down, and the one where you go to a sub-table to prove Adam Warlock’s innocence in Soulworld with magnetic flippers. If you don’t know the story, essentially it’s a sweet love story about a mad titan that is trying to impress his mistress, Death, by wiping out most of the life in the universe. And only Marvel’s heroes can stop him.

It’s a playful table definitely not bound to the limits of physical possibility. It’s the kind of playfulness which ZEN has always trucked in, and it is particularly on display in the centerpiece Avengers table. The package is, after all, called “Avengers Chronicles” in a tie-in with the bazillion dollar smash hit motion picture. The Avengers table, which is set inside a miniature version of the SHIELD Helicarrier, is a ramp-heavy affair with a central target array that reminds me somewhat of the old Doctor Who table. But this table’s secret weapon is that you get to choose an Avenger every ball. Not only does this mean that your ball will be decked out in the colors and costuming of your favorite character, it also imparts special scoring for certain targets and even modes exclusive to that ball. This is an awesome, well-implemented idea that actually adds a layer of strategy. If you want the ball save, you pick Cap. If you want to boost the multiplier, go with Iron Man. 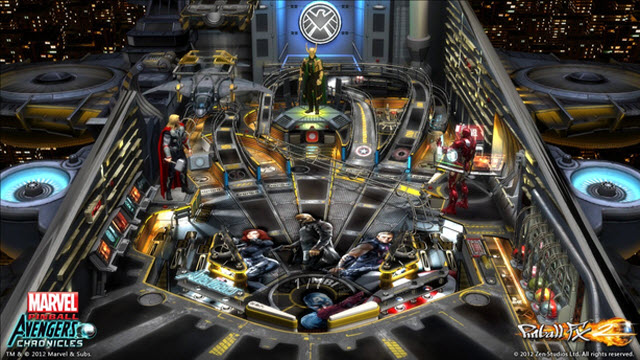 One thing I love about the Avengers table- and this is likely totally a Michael Barnes thing- is that even though it’s based on the film they apparently didn’t have the license to use the actors’ likenesses or voices. So there’s some dude trying to sound like Sam Jackson and illustrations that look “kind of” like ScarJo. It gives the table a sense of authenticity, like when you’d play a pin back in the 1980s with artists’ approximation of subject matter rather than actual images.

The other two tables, unfortunately, aren’t as remarkable. One is World War Hulk, which tells the story of Hulk returning to Earth for revenge after being exiled to a gladiator planet by Tony Stark, Reed Richards, and a conclave of concerned heroes. I haven’t read the books. But apparently, one of the things the Hulk does is build an arena. I know this because the table tells you so over and over again in what I assume is supposed to be Ben Grimm’s voice. It’s a shockingly yellow table for being about the Hulk. For those that have read the books, this one may have some good fan service.

Rounding it out is Fear Itself, based on the Matt Fraction crossover from last year that I also haven’t read. There’s a really awesome, dramatic circular loop that crosses behind the flippers and over the dropout hole, but other than the table is strangely boring. The storyline has something to do with an Asgardian serpent showing up and menacing Midgard, and apparently Cap’s shield gets broken at some point. I get a sense that the table may be hiding some sterner challenges than the other three, which all skew to the easy side as has been common with all of the Marvel tables. I just haven’t really cared enough about it to dig deeper.

What I like about all of these tables is that they’re very storyline-driven rather than character driven. I’d like to see more like this. Who wouldn’t want to see a Secret Wars, Mutant Massacre, or Civil War table? Hell, I’m surprised there’s not already a Marvel Zombies one. Maybe I shouldn’t have said that.