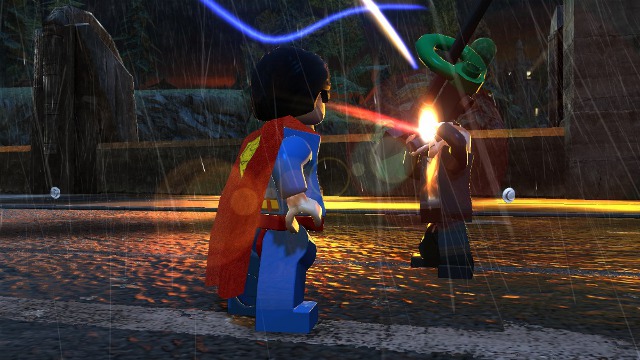 Just when I thought I was over the whole LEGO-as-videogame thing, Warner and Traveller’s Tales drops this gem of a game in my lap. I was as charmed as the next guy when the Lego games first appeared in 2005 and 2006 — I played the Star Wars games with my daughter in co-op mode and had a grand old time. If it wasn’t for the fact that I had a (at the time) six year old child begging to play the games with me, they’d likely have been nothing more than quick and disposable bits of videogame entertainment. The Lego games were always more a cute distraction than an obsession.

In fact I haven’t played a LEGO game in a while. I skipped the Harry Potter games and merely dabbled with Indiana Jones and simply had no interest in the first Batman LEGO game. Truth is this series, as far as I was concerned, had run its course.

LEGO Batman 2: DC Super Heroes isn’t just a cute, disposable piece of entertainment. Well, it still is that but it’s also terribly addictive. I’m playing it co-op with my (now 11 year old) daughter. I’m playing it at night after she’s gone to bed. I’m playing it more than I ever imagined possible for a game that is still clearly designed as an easy, collectible romp through Gotham and not a game that will test your gamepad prowess.

The basic idea is the same as in other Lego games — you solve puzzles, do some basic platforming, frantically piece together piles of dancing Legos, and collect a metric ton of “stuff” from gold bricks to various heroes, villains and henchmen in the DC Universe.

READ ALSO:  The Wonders of The Witcher 2

So what is it about Batman 2 that makes this LEGO game special? 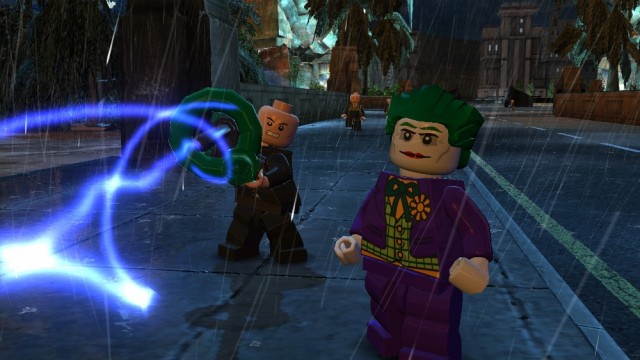 First off, the world is enormous. The campaign is about a 20% chunk of the entire game and you’ll run through Batman’s struggle with Lex Luthor and The Joker in a few lengthy play sessions. The 15 scripted missions are fairly standard Lego fare although the spoken dialogue adds more to the game than anticipated. No longer are the LEGO heroes mimes with a flair for humor. There is a lot of spoken dialogue not only from the Gotham TV news reporter but also from Batman, Robin, Superman, The Joker, etc. Robin is starry-eyed over Superman’s ability to be awesome. Batman’s (somewhat playful) disdain for Superman is ever present. Superman the whole time remains the ultimate goody-goody. The banter between the characters is excellent and as someone who usually despises cutscenes, I loved watching the story unfold. I actually laughed when Batman said to Robin who was pleading with him to call Superman for help, “We are not…calling…Superman!”

This is, technically, an open world game in that you can scoot around Gotham as you please, or follow a designated path toward the next campaign mission if you want to do the next chapter in the story. Or you can scan the city for various villains, go beat them up, and if you have the needed funds unlock them for use in Free Play/Open World mode. Some of these guys are pricey. Mat-Bat, The Penguin, General Zod…they run 500K each which is a nice chunk of change. There’s a slew of characters to unlock but you’ll need to complete the campaign to get most of them — certain members of the Justice League show up near the end of the Luthor/Joker story so you’ll be able to play as The Flash, Wonder Woman, Green Lantern as well as Cyborg.

The issue with unlocking villains is that it’s simply a quickly staged fight once you locate them, and then you can buy them as they surrender to you. Unlocking General Zod, for example, consisted of locating him through the map feature, flying Superman to the rooftop where he was located and punching him out in about ten seconds. I wish there was a little more to it than that. The “fights” with these unlockable villains are fairly easy. Killer Croc succumbed to three uppercuts from the Caped Crusader. Croc gets no respect, as usual.

Playing as Batman, even with his various suits which are used to perform certain tasks in the campaign (an electricity suit, a sonar bat suit, a power suit that shoots missiles) plays second fiddle to the other heroes. Flying around Gotham as Superman, with the awesome theme music from the original film blaring in the background, is simply a joy. I love that music and it is used perfectly here. Controlling The Flash is actually pretty hard to do because he’s so damn fast. Green Lantern can fly and can also use his ring to piece together specific green blocks that you find throughout the city. It was a great move to add so many playable characters because Batman is sorta of…blah. And Robin has to put on a ridiculous haz-mat suit and magnetic flippers from time to time.

As much as I enjoy flying around the city, rescuing citizens, unlocking characters and snatching up gold bricks, doing it in co-op mode is is still the way to go. The game plays in split/screen mode so you can go where you want and are not tied down when your partner lags behind or forges ahead before you’re ready. It can get a little confusing at times when the heroes are close to one another as the split screen line starts to move around a bit but after you get used to it it works just fine. 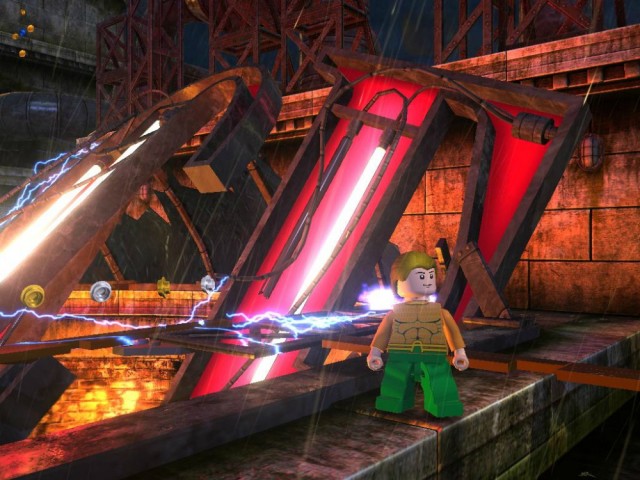 While I feel that the open-world part of the game would benefit more from additional mini-game missions and various tasks to perform aside from finding and unlocking characters, and that some of those characters were a little more unique, this remains an easy game to recommend for the parent looking to play a beefed up LEGO game with their kid or a solo gamer who loves to collect stuff..and fly around as Superman. This is low risk, high reward gaming.

I feel like I have been dishing out No High Scores High Score Awards like candy of late, but I’m very happy I played LEGO Batman 2, and that’s reason enough to hand out another one .